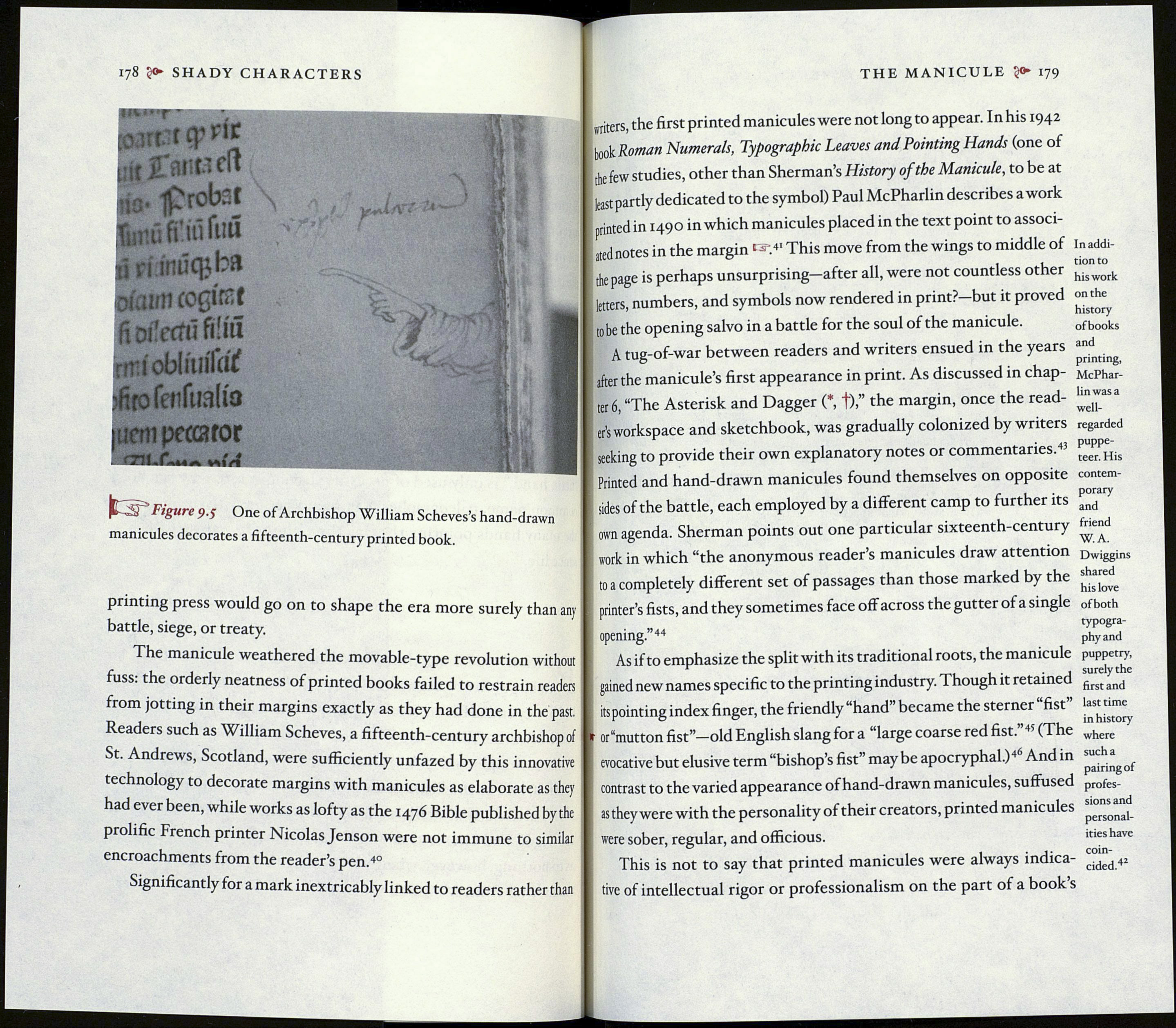 printing press would go on to shape the era more surely than any
battle, siege, or treaty.

The manicule weathered the movable-type revolution without
fuss: the orderly neatness of printed books failed to restrain readers
from jotting in their margins exactly as they had done in the past.
Readers such as William Scheves, a fifteenth-century archbishop of
St. Andrews, Scotland, were sufficiently unfazed by this innovative
technology to decorate margins with manicules as elaborate as they
had ever been, while works as lofty as the 1476 Bible published by the
prolific French printer Nicolas Jenson were not immune to similar
encroachments from the reader’s pen.40

Significantly for a mark inextricably linked to readers rather than

I w¡terS) the first printed manicules were not long to appear. In his 1942
book Roman Numerals, Typographic Leaves and Pointing Hands (one of
,k few studies, other than Sherman’s History of the Manicule, to be at
least partly dedicated to the symbol) PaulMcPharlin describes a work
I printed in 1490 in which manicules placed in the text point to associ-
: ated notes in the margin 's-.4’ This move from the wings to middle of
the page is perhaps unsurprising—after all, were not countless other
letters, numbers, and symbols now rendered in print?—but it proved
tobe the opening salvo in a battle for the soul of the manicule.

A tug-of-war between readers and writers ensued in the years
after the manicule’s first appearance in print. As discussed in chap¬
ter 6, “The Asterisk and Dagger (*, t)>” the margin, once the read¬
er’s workspace and sketchbook, was gradually colonized by writers
seeking to provide their own explanatory notes or commentaries.43
Printed and hand-drawn manicules found themselves on opposite
sides of the battle, each employed by a different camp to further its
own agenda. Sherman points out one particular sixteenth-century
work in which “the anonymous reader’s manicules draw attention
to a completely different set of passages than those marked by the
printer’s fists, and they sometimes face off across the gutter of a single
opening.”44

As if to emphasize the split with its traditional roots, the manicule
gained new names specific to the printing industry. Though it retained
its pointing index finger, the friendly “hand” became the sterner fist
or “mutton fist”—old English slang for a “large coarse red fist.”45 (The
evocative but elusive term “bishop’s fist” may be apocryphal.)4 And in
contrast to the varied appearance of hand-drawn manicules, suffused
as they were with the personality of their creators, printed manicules
were sober, regular, and officious.

In addi¬
tion to
his work
on the
history
ofbooks
and