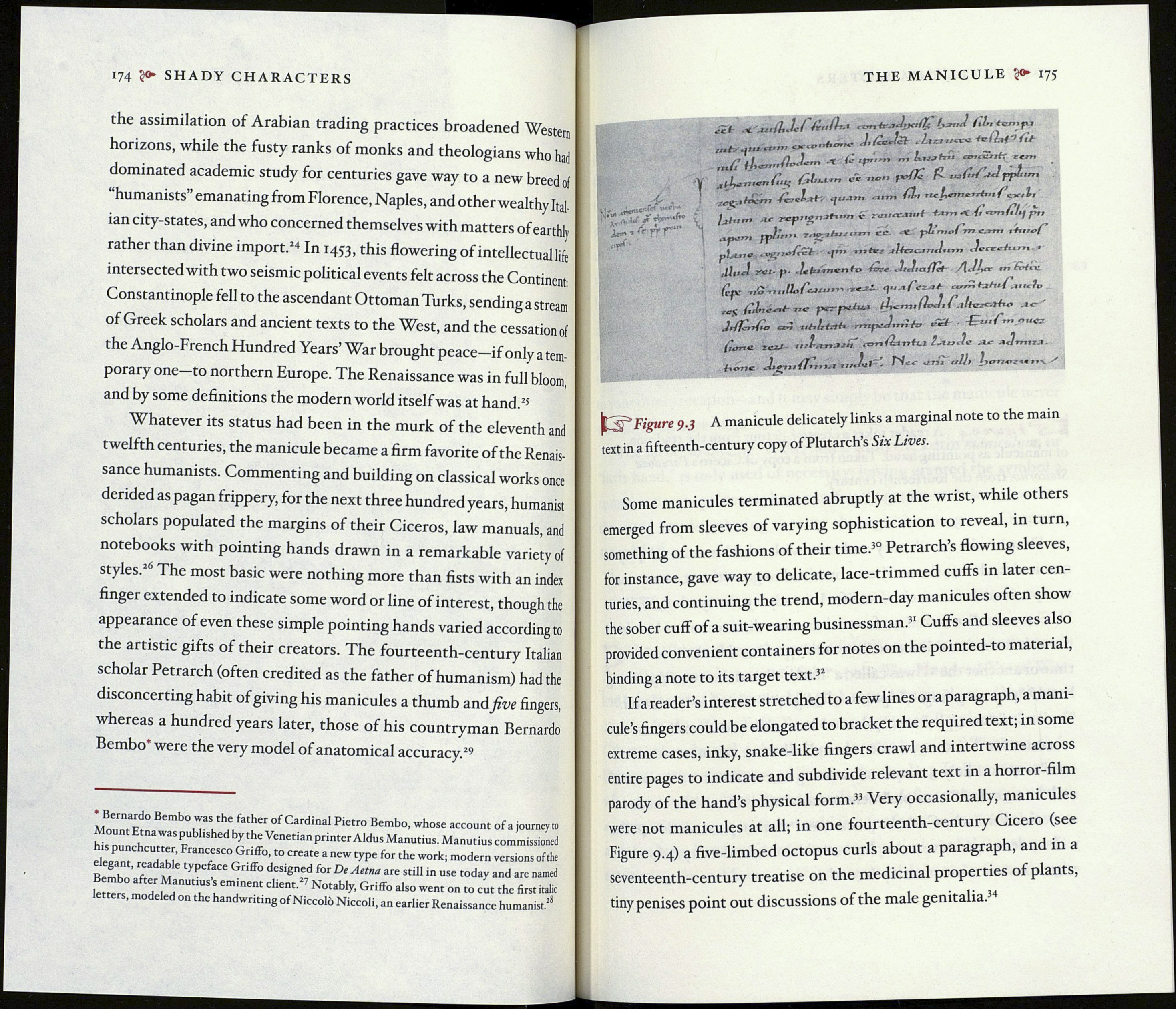 the assimilation of Arabian trading practices broadened Western
horizons, while the fusty ranks of monks and theologians who had
dominated academic study for centuries gave way to a new breed of
humanists emanating from Florence, Naples, and other wealthy Ital¬
ian city-states, and who concerned themselves with matters of earthly
rather than divine import.24 In 1453, this flowering of intellectual life
intersected with two seismic political events felt across the Continent
Constantinople fell to the ascendant Ottoman Turks, sending a stream
of Greek scholars and ancient texts to the West, and the cessationof
the Anglo-French Hundred Years’ War brought peace-if only a tem¬
porary one—to northern Europe. The Renaissance was in full bloom,
and by some definitions the modern world itself was at hand.2*
Whatever its status had been in the murk of the eleventh and
twelfth centuries, the manicule became a firm favorite of the Renais¬
sance humanists. Commenting and building on classical works once
derided as pagan frippery, for the next three hundred years, humanist
scholars populated the margins of their Ciceros, law manuals, and
notebooks with pointing hands drawn in a remarkable variety of
styles.26 The most basic were nothing more than fists with an index
finger extended to indicate some word or line of interest, though the
appearance of even these simple pointing hands varied according to
the artistic gifts of their creators. The fourteenth-century Italian
scholar Petrarch (often credited as the father of humanism) had the
disconcerting habit of giving his manicules a thumb andfive fingers,
whereas a hundred years later, those of his countryman Bernardo
Bembo* were the very model of anatomical accuracy.29

^F/gi/re 9.3 A manicule delicately links a marginal note to the main
text in a fifteenth-century copy of Plutarch’s Six Lives.

Some manicules terminated abruptly at the wrist, while others
emerged from sleeves of varying sophistication to reveal, in turn,
something of the fashions of their tinted Petrarch’s flowing sleeves,
for instance, gave way to delicate, lace-trimmed cuffs in later cen¬
turies, and continuing the trend, modern-day manicules often show
the sober cuff of a suit-wearing businessman.*1 Cuffs and sleeves also
provided convenient containers for notes on the pointed-to material,

binding a note to its target text.32

If a reader’s interest stretched to a few lines or a paragraph, a mam-
cule’s fingers could be elongated to bracket the required text; in some
extreme cases, inky, snake-like fingers crawl and intertwine across
entire pages to indicate and subdivide relevant text in a horror-film
parody of the hand’s physical form.33 Very occasionally, manicules
were not manicules at all; in one fourteenth-century Cicero (see
Figure 9.4) a five-limbed octopus curls about a paragraph, and in a
seventeenth-century treatise on the medicinal properties of plants,
dnypenises point out discussions of the male genitalia.4