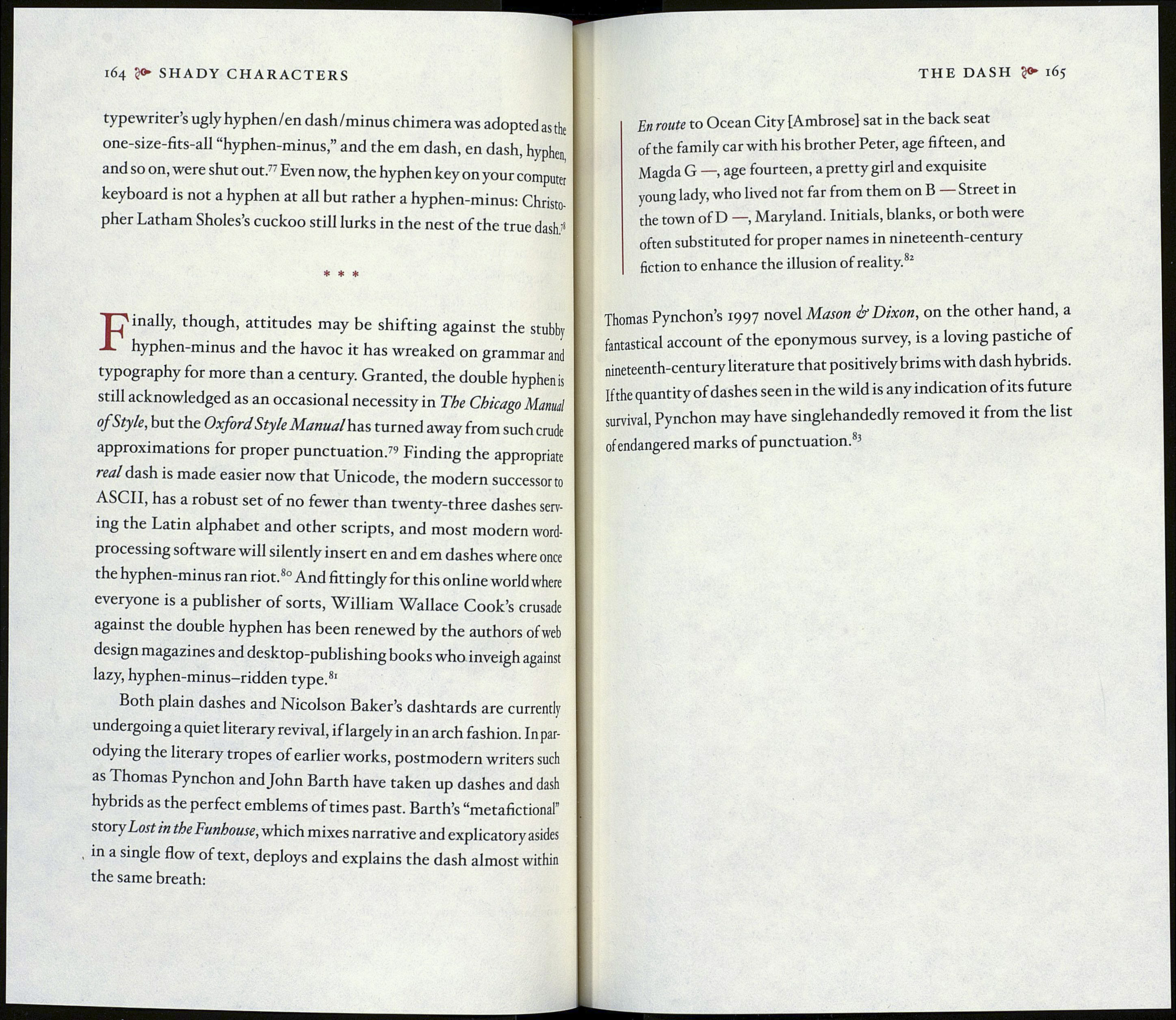 typewriter’s ugly hyphen/en dash/minus chimera was adopted as the
one-size-fits-all “hyphen-minus,” and the em dash, en dash, hyphen
and so on, were shut out.77 Even now, the hyphen key on your computer
keyboard is not a hyphen at all but rather a hyphen-minus: Christo¬
pher Latham Sholes’s cuckoo still lurks in the nest of the true dash7®

'P'inally, though, attitudes may be shifting against the stubby
hyphen-minus and the havoc it has wreaked on grammar and
typography for more than a century. Granted, the double hyphenis
sttll acknowledged as an occasional necessity in The Chicago Manual
of Style, but the OxfordStyle Manualhas turned away from such crude
approximations for proper punctuation.7’ Finding the appropriate
real dash is made easier now that Unicode, the modern successor to
ASCII, has a robust set of no fewer than twenty-three dashes serv¬
ing the Latin alphabet and other scripts, and most modern word-
processing software will silently insert en and em dashes where once
the hyphen-minus ran riot.80 And fittingly for this online world where
everyone is a publisher of sorts, William Wallace Cook’s crusade
against the double hyphen has been renewed by the authors of web
design magazines and desktop-publishing books who inveigh against
lazy, hyphen-minus-ridden type.81

Both plain dashes and Nicolson Baker’s dashtards are currently
undergoing a quiet literary revival, if largely in an arch fashion. Inpar-
odying the literary tropes of earlier works, postmodern writers such
as Thomas Pynchon and John Barth have taken up dashes and dash
hybrids as the perfect emblems of times past. Barth’s “metafictional”
stor y Lost in theFunhouse, which mixes narrative and explicatory asides
in a single flow of text, deploys and explains the dash almost within
the same breath:

En route to Ocean City [Ambrose] sat in the back seat
of the family car with his brother Peter, age fifteen, and
Magda G —, age fourteen, a pretty girl and exquisite
young lady, who lived not far from them on В Street in
the town of D —, Maryland. Initials, blanks, or both were
often substituted for proper names in nineteenth-century
fiction to enhance the illusion of reality.82

Thomas Pynchon’s 1997 novel Mason è1 Dixon, on the other hand, a
fantastical account of the eponymous survey, is a loving pastiche of
nineteenth-century literature that positively brims with dash hybrids.
Ifthe quantity of dashes seen in the wild is any indication of its future
survival, Pynchon may have singlehandedly removed it from the list
of endangered marks of punctuation.83