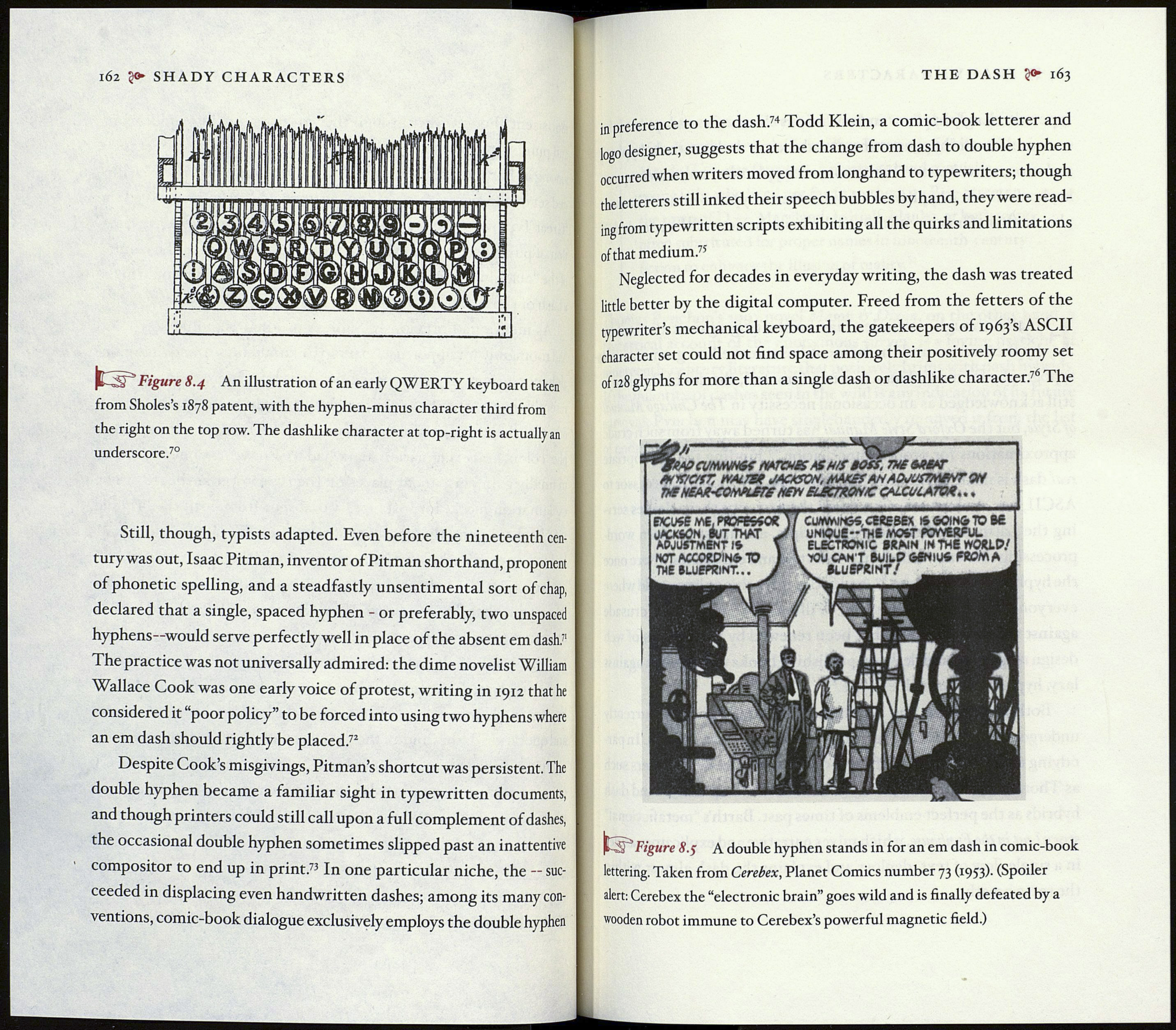 t-Âf5 Figure 8.4 An illustration of an early QWERTY keyboard taken

from Sholes’s 1878 patent, with the hyphen-minus character third from
the right on the top row. The dashlike character at top-right is actually an
underscore.70

Still, though, typists adapted. Even before the nineteenth cen¬
tury was out, Isaac Pitman, inventor of Pitman shorthand, proponent
of phonetic spelling, and a steadfastly unsentimental sort of chap,
declared that a single, spaced hyphen - or preferably, two unspaced
hyphens—would serve perfectly well in place of the absent em dash.''
The practice was not universally admired: the dime novelist William
Wallace Cook was one early voice of protest, writing in 1912 that he
considered it “poor policy” to be forced into using two hyphens where
an em dash should rightly be placed.72

Despite Cook’s misgivings, Pitman’s shortcut was persistent. The
double hyphen became a familiar sight in typewritten documents,
and though printers could still call upon a full complement of dashes,
the occasional double hyphen sometimes slipped past an inattentive
compositor to end up in print.73 In one particular niche, the — suc¬
ceeded in displacing even handwritten dashes; among its many con¬
ventions, comic-book dialogue exclusively employs the double hyphen

in preference to the dash.74 Todd Klein, a comic-book letterer and
logo designer, suggests that the change from dash to double hyphen
occurred when writers moved from longhand to typewriters; though
theletterers still inked their speech bubbles by hand, they were read¬
ing from typewritten scripts exhibiting all the quirks and limitations

Neglected for decades in everyday writing, the dash was treated
little better by the digital computer. Freed from the fetters of the
typewriter’s mechanical keyboard, the gatekeepers of 1963’s ASCII
character set could not find space among their positively roomy set
of 128 glyphs for more than a single dash or dashlike character.76 The

Cummings, ceresex « going to B£
UNK?ue--TH6 MOST POWERFUL
ELECTRONIC »RNN IN THE WORLD/
>0U CAN'T MILD GENIUS FROM A
V RLUEPRlNT/ ^

EXCUSE ME, PtüfESSOR
JXCK4ÖN, BUT THAT ,
APJUSTMENT IS X
NOT ACCORDING TO 1
THE BLUEPRINT... J

(G11 Figure 8.5 A double hyphen stands in for an em dash in comic-book