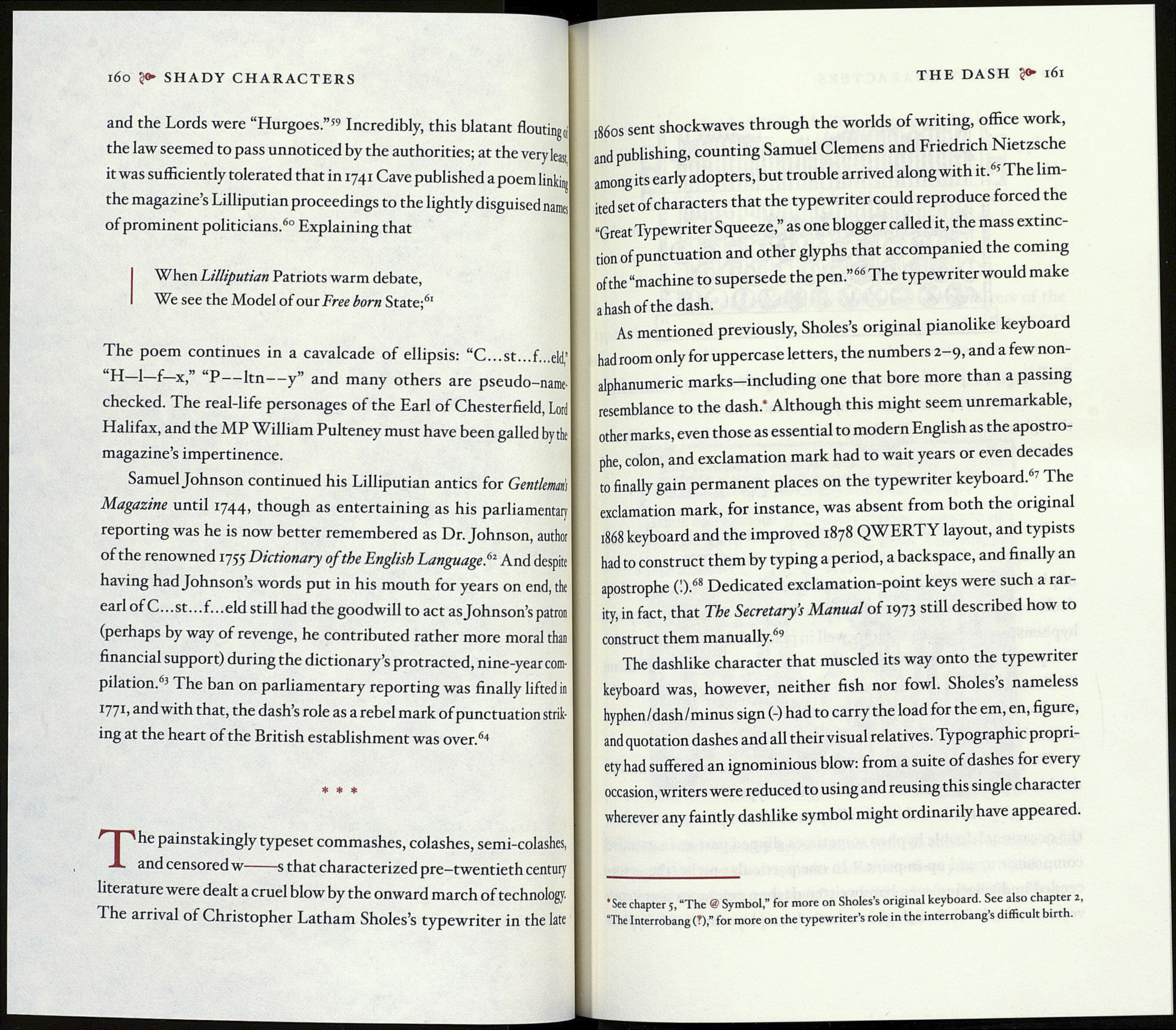 and the Lords were “Hurgoes.”59 Incredibly, this blatant floutingof
the law seemed to pass unnoticed by the authorities; at the very leas,
it was sufficiently tolerated that in 1741 Cave published a poem ІіпЦ
the magazine’s Lilliputian proceedings to the lightly disguised names
of prominent politicians.60 Explaining that

We see the Model of our Free born State;61

1—f—X,” “P—ltn—y” and many others are pseudo-name-
checked. The real-life personages of the Earl of Chesterfield, Lori
Halifax, and the MP William Pulteney must have been galled by the
magazine’s impertinence.

Samuel Johnson continued his Lilliputian antics for Gentlemd
Magazine until 1744, though as entertaining as his parliamentary
reporting was he is now better remembered as Dr. Johnson, author
of the renowned 1755 Dictionary of the English Language.61 And despite
having had Johnson’s words put in his mouth for years on end, the
earl of С... st... f... eld still had the goodwill to act as Johnson’s patron
(perhaps by way of revenge, he contributed rather more moral than
financial support) during the dictionary’s protracted, nine-year com¬
pilation.6’ The ban on parliamentary reporting was finally lifted in
1771, and with that, the dash’s role as a rebel mark of punctuation strik¬
ing at the heart of the British establishment was over.64

literature were dealt a cruel blow by the onward march of technology.
The arrival of Christopher Latham Sholes’s typewriter in the late

1860S sent shockwaves through the worlds of writing, office work,
and publishing, counting Samuel Clemens and Friedrich Nietzsche
among its early adopters, but trouble arrived along with it.65 The lim¬
ited set of characters that the typewriter could reproduce forced the
“Great Typewriter Squeeze,” as one blogger called it, the mass extinc¬
tion of punctuation and other glyphs that accompanied the coming
ofthe “machine to supersede the pen.”66 The typewriter would make

had room only for uppercase letters, the numbers 2-9, and a few non-
alphanumeric marks-including one that bore more than a passing
resemblance to the dash.* Although this might seem unremarkable,
other marks, even those as essential to modern English as the apostro¬
phe, colon, and exclamation mark had to wait years or even decades
to finally gain permanent places on the typewriter keyboard.67 The
exclamation mark, for instance, was absent from both the original
1868 keyboard and the improved 1878 QWERTY layout, and typists
had to construct them by typing a period, a backspace, and finally an
apostrophe C).68 Dedicated exclamation-point keys were such a rar¬
ity, in fact, that The Secretary’s Manual of 1973 still described how to

The dashlike character that muscled its way onto the typewriter
keyboard was, however, neither fish nor fowl. Sholes’s nameless
hyphen/dash/minus sign (-) had to carry the load for the em, en, figure,
and quotation dashes and all theirvisual relatives. Typographic propri
ety had suffered an ignominious blow: from a suite of dashes for every
occasion, writers were reduced to using and reusing this single character
wherever any faintly dashlike symbol might ordinarily have appeared.

* See chapter 5, “The @ Symbol,” for more on Sholes’s original keyboard. See also chapter 2,
“The Interrobang (?),” for more on the typewriter’s role in the interrobang’s difficult birth.