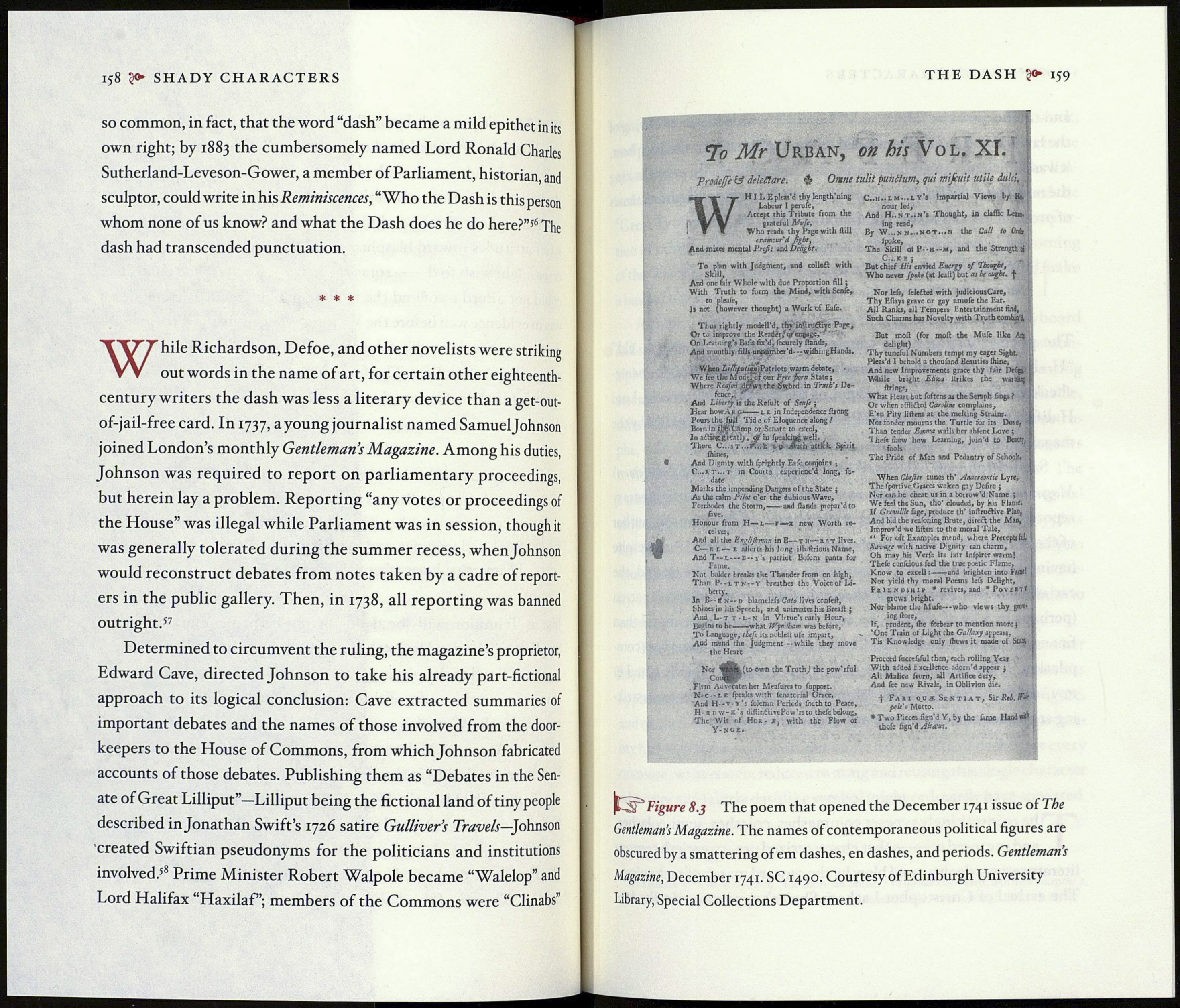 so common, in fact, that the word “dash” became a mild epithet in its
own right; by 1883 the cumbersomely named Lord Ronald Charles
Sutherland-Leveson-Gower, a member of Parliament, historian, and
sculptor, could write in his Reminiscences, “Who the Dash is this person
whom none of us know? and what the Dash does he do here?”56 The
dash had transcended punctuation.

While Richardson, Defoe, and other novelists were striking
out words in the name of art, for certain other eighteenth-
century writers the dash was less a literary device than a get-out-
of-jail-free card. In 1737, a young journalist named Samuel Johnson
joined London’s monthly Gentleman’s Magazine. Among his duties,
Johnson was required to report on parliamentary proceedings,
but herein lay a problem. Reporting “any votes or proceedings of
the House” was illegal while Parliament was in session, though it
was generally tolerated during the summer recess, when Johnson
would reconstruct debates from notes taken by a cadre of report¬
ers in the public gallery. Then, in 1738, all reporting was banned
outright.57

Determined to circumvent the ruling, the magazine’s proprietor,
Edward Cave, directed Johnson to take his already part-fictional
approach to its logical conclusion: Cave extracted summaries of
important debates and the names of those involved from the door¬
keepers to the House of Commons, from which Johnson fabricated
accounts of those debates. Publishing them as “Debates in the Sen¬
ate of Great Lilliput”—Lilliput being the fictional land of tiny people
described in Jonathan Swift’s 1726 satire Gulliver’s Travels—Johnson
created Swiftian pseudonyms for the politicians and institutions
involved.58 Prime Minister Robert Walpole became “Walelop” and
Lord Halifax “Haxilaf”; members of the Commons were “Clinabs"

Accept this Tribute from the
gmteful Ще,

Who read* thy Page with fliil

And mixes mental Profit and Delight,

To plan with Judgment, and colle£t with
Skill.

And one fair Whole with due Proportion fill :
With Truth to form the Mind, with Senfc,
to pleale,

]s not (however thought) a Work of Eafe.

We ice the ModcLof our Free fern State ;

And Liberty is the Refult of Sen ft •

Born in ффрітр or Scrute to excel,

Marks the impending Dangers of the State j
As the calm Ri lot o’er the dubious Wave,

Forebodes the Storm, and fonds piepat’dto

Begins to be what IVyn.ibam was before,

Aod mend the Judgment --while they move
the Heart

But moil (for moil the Mufe like A3
delight)

What Heart but fattens as the Seraph fmgs ? •

Or when affliíled Caroline complains,

Not fonder mourns the Turtle for its Dor i,
Than tender Emma wails her ahfent larve j
'Ihefe flrew how Learning, join’d to Bewtj,
fools

The Pride cf Man and Pedantry of Schools.

When Cbtfier tunes th* Anacreontic Lyre,
The fponivc Graces waken gay Delire j
Nor can he cheat ui in a boi row’d Name ;

We feel the Sun, tho’ clouded, by his FUnti.

Improv’d we liften to the moral Tale,

(to own the Truth J the pow’rful

Figure 8.3 The poem that opened the December 1741 issue of The
Gentleman’s Magazine. The names of contemporaneous political figures are
obscured by a smattering of em dashes, en dashes, and periods. Gentleman’s
Magazine, December 1741. SC 1490. Courtesy of Edinburgh University
Library, Special Collections Department.