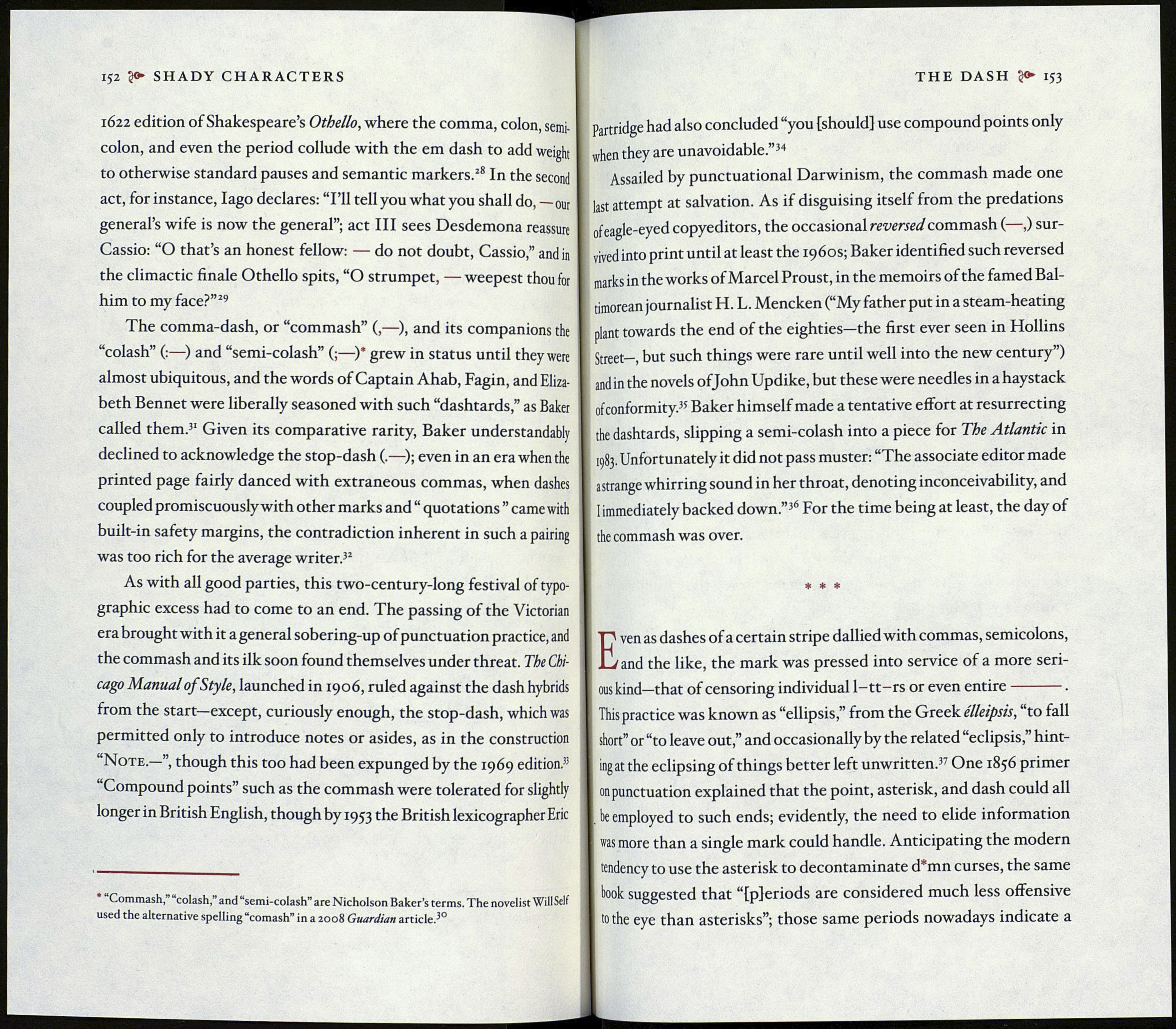 1622 edition of Shakespeare’s Othello, where the comma, colon, semi¬
colon, and even the period collude with the em dash to add weight
to otherwise standard pauses and semantic markers.28 In the second
act, for instance, lago declares: “I’ll tell you what you shall do, —our
general’s wife is now the general”; act III sees Desdemona reassure
Cassio: “О that’s an honest fellow: — do not doubt, Cassio,” and in
the climactic finale Othello spits, “O strumpet, —weepest thou for
him to my face?”29

The comma-dash, or “commash” (,—), and its companions the
“colash” (:—) and “semi-colash” (;—■)* grew in status until they were
almost ubiquitous, and the words of Captain Ahab, Fagin, and Eliza¬
beth Bennet were liberally seasoned with such “dashtards,” as Baker
called them.31 Given its comparative rarity, Baker understandably
declined to acknowledge the stop-dash (.—-); even in an era when the
printed page fairly danced with extraneous commas, when dashes
coupled promiscuously with other marks and “ quotations ” came with
built-in safety margins, the contradiction inherent in such a pairing
was too rich for the average writer.32

As with all good parties, this two-century-long festival of typo¬
graphic excess had to come to an end. The passing of the Victorian
era brought with it a general sobering-up of punctuation practice, and
the commash and its ilk soon found themselves under threat. The Chi¬
cago Manual of Style, launched in 1906, ruled against the dash hybrids
from the start—except, curiously enough, the stop-dash, which was
permitted only to introduce notes or asides, as in the construction
“Note.—”, though this too had been expunged by the 1969 edition.33
Compound points” such as the commash were tolerated for slightly
longer in British English, though by 1953 the British lexicographer Eric

Commash, colash,” and “semi-colash” are Nicholson Baker’s terms. The novelist Will Self
used the alternative spelling “comash” in a 2008 Guardian article.^0

Partridge had also concluded “you [should] use compound points only
when they are unavoidable.”34

Assailed by punctuational Darwinism, the commash made one
last attempt at salvation. As if disguising itself from the predations
of eagle-eyed copyeditors, the occasional reversed commash (—,) sur¬
vived into print until at least the 1960s; Baker identified such reversed
marks in the works of Marcel Proust, in the memoirs of the famed Bal¬
timorean journalist H. L. Mencken (“My father put in a steam-heating
plant towards the end of the eighties—the first ever seen in Hollins
Street—, but such things were rare until well into the new century”)
and in the novels of John Updike, but these were needles in a haystack
of conformity.35 Baker himself made a tentative effort at resurrecting
the dashtards, slipping a semi-colash into a piece for The Atlantic in
1983. Unfortunately it did not pass muster: “The associate editor made
astrange whirring sound in her throat, denoting inconceivability, and
1 immediately backed down.”36 For the time being at least, the day of
the commash was over.

Even as dashes of a certain stripe dallied with commas, semicolons,
and the like, the mark was pressed into service of a more seri¬
ous kind—that of censoring individual 1-tt-rs or even entire .

This practice was known as “ellipsis,” from the Greek élleipsis, “to fall
short” or “to leave out,” and occasionally by the related “eclipsis,” hint¬
ing at the eclipsing of things better left unwritten.37 One 1856 primer
on punctuation explained that the point, asterisk, and dash could all
be employed to such ends; evidently, the need to elide information
was more than a single mark could handle. Anticipating the modern
tendency to use the asterisk to decontaminate d*mn curses, the same
book suggested that “[p]eriods are considered much less offensive
to the eye than asterisks”; those same periods nowadays indicate a