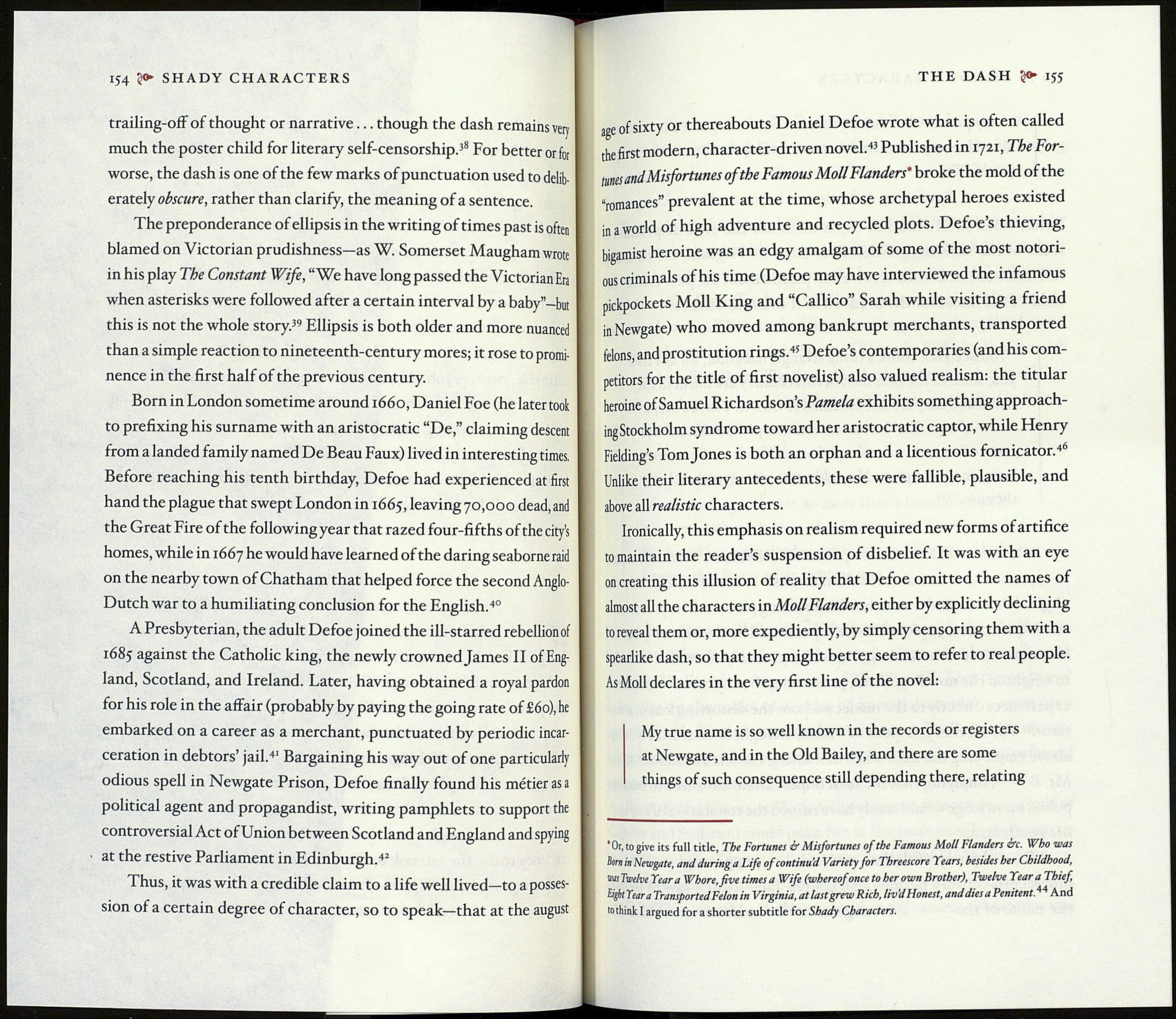 trailing-off of thought or narrative... though the dash remains very
much the poster child for literary self-censorship.38 For better or for
worse, the dash is one of the few marks of punctuation used to delib¬
erately obscure, rather than clarify, the meaning of a sentence.

The preponderance of ellipsis in the writing of times past is often
blamed on Victorian prudishness—as W. Somerset Maugham wrote
in his play The Constant Wife, “We have long passed the VictorianEra
when asterisks were followed after a certain interval by a baby”-but
this is not the whole story.39 Ellipsis is both older and more nuanced
than a simple reaction to nineteenth-century mores; it rose to promi¬
nence in the first half of the previous century.

Born in London sometime around 1660, Daniel Foe (he later took
to prefixing his surname with an aristocratic “De,” claiming descent
from a landed family named De Beau Faux) lived in interesting times.
Before reaching his tenth birthday, Defoe had experienced at first
hand the plague that swept London in 1665, leaving 70,000 dead, and
the Great Fire of the following year that razed four-fifths of the city’s
homes, while in 1667 he would have learned of the daring seaborne raid
on the nearby town of Chatham that helped force the second Anglo-
Dutch war to a humiliating conclusion for the English.40

A Presbyterian, the adult Defoe joined the ill-starred rebellion of
1685 against the Catholic king, the newly crowned James II of Eng¬
land, Scotland, and Ireland. Later, having obtained a royal pardon
for his role in the affair (probably by paying the going rate of £60), he
embarked on a career as a merchant, punctuated by periodic incar¬
ceration in debtors’ jail.4' Bargaining his way out of one particularly
odious spell in Newgate Prison, Defoe finally found his métier as a
political agent and propagandist, writing pamphlets to support the
controversial Act of Union between Scotland and England and spying
at the restive Parliament in Edinburgh.42

Thus, it was with a credible claim to a life well lived—to a posses¬
sion of a certain degree of character, so to speak—that at the august

age of sixty or thereabouts Daniel Defoe wrote what is often called
the first modern, character-driven novel.43 Published in 1721, The For¬
tunes and Misfortunes ofthe Famous Moll Flanders* broke the mold of the
“romances” prevalent at the time, whose archetypal heroes existed
in a world of high adventure and recycled plots. Defoe’s thieving,
bigamist heroine was an edgy amalgam of some of the most notori¬
ous criminals of his time (Defoe may have interviewed the infamous
pickpockets Moll King and “Callico” Sarah while visiting a friend
in Newgate) who moved among bankrupt merchants, transported
felons, and prostitution rings.45 Defoe’s contemporaries (and his com¬
petitors for the title of first novelist) also valued realism: the titular
heroine of Samuel Richardson’s Pamela exhibits something approach¬
ing Stockholm syndrome toward her aristocratic captor, while Henry
Fielding’s Tom Jones is both an orphan and a licentious fornicator.46
Unlike their literary antecedents, these were fallible, plausible, and
above all realistic characters.

Ironically, this emphasis on realism required new forms of artifice
to maintain the reader’s suspension of disbelief. It was with an eye
on creating this illusion of reality that Defoe omitted the names of
almost all the characters in Moll Flanders, either by explicitly declining
to reveal them or, more expediently, by simply censoring them with a
spearlike dash, so that they might better seem to refer to real people.
As Moll declares in the very first line of the novel:

My true name is so well known in the records or registers
at Newgate, and in the Old Bailey, and there are some
things of such consequence still depending there, relating

'Or, to give its full title, The Fortunes

Horn in Newgate, and during a Life of continu'd Variety for Threescore Tears, besides her Childhood,
VMsTwelve Year a Whore, five times a Wife (whereofonce to her own Brother), Twelve Tear a Thief,
Щ/лТеаг a Transported Felon in Virginia, at last grew Rich, liv'd Honest, and dies a Penitent,44 And
to think I argued for a shorter subtitle for Shady Characters.