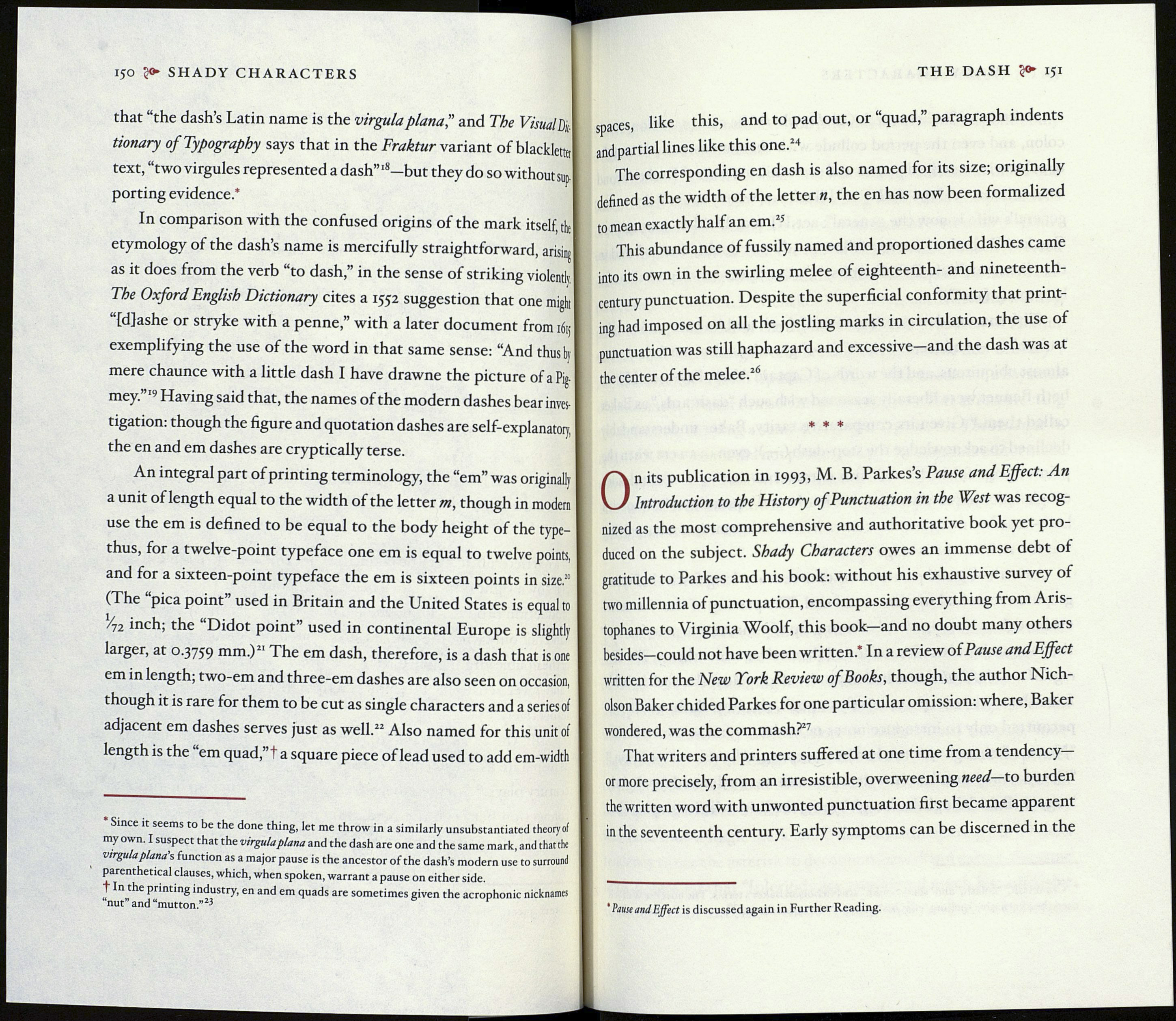 that “the dash’s Latin name is the virgula planai' and The Visual Djt-
tionary of Typography says that in the Fraktur variant of blackletter
text, “two virgules represented a dash”,8-but they do so without sup.
porting evidence.*

In comparison with the confused origins of the mark itself, tht
etymology of the dash’s name is mercifully straightforward, arising
as it does from the verb “to dash,” in the sense of striking violently,
The Oxford English Dictionary cites a 1552 suggestion that one might
“{djashe or stryke with a penne,” with a later document from 1615
exemplifying the use of the word in that same sense: “And thus by
mere chaunce with a little dash I have drawne the picture of a Pig-
mey-”'9 Having said that, the names of the modern dashes bear inves¬
tigation: though the figure and quotation dashes are self-explanatory:
the en and em dashes are cryptically terse.

An integral part of printing terminology, the “em” was originally
a unit of length equal to the width of the letter m, though in modern
use the em is defined to be equal to the body height of the type—
thus, for a twelve-point typeface one em is equal to twelve points,
and for a sixteen-point typeface the em is sixteen points in size.11
(The pica point used in Britain and the United States is equal to
/72 inch; the Didot point” used in continental Europe is slightly
larger, at 0.3759 mm.)21 The em dash, therefore, is a dash that is one
em in length; two-em and three-em dashes are also seen on occasion,
though it is rare for them to be cut as single characters and a series of
adjacent em dashes serves just as well.22 Also named for this unit of
length is the em quad,”t a square piece of lead used to add em-width

Since it seems to be the done thing, let me throw in a similarly unsubstantiated theory of
my own. I suspect that the virgula plana and the dash are one and the same mark, and that the
virgula plana'% function as a major pause is the ancestor of the dash’s modern use to surround
parenthetical clauses, which, when spoken, warrant a pause on either side.

spaces, like this, and to pad out, or “quad,” paragraph indents

The corresponding en dash is also named for its size, originally
defined as the width of the letter n, the en has now been formalized

to mean exactly half an em. 5

This abundance of fussily named and proportioned dashes came
into its own in the swirling melee of eighteenth- and nineteenth-
century punctuation. Despite the superficial conformity that print¬
ing had imposed on all the jostling marks in circulation, the use of
punctuation was still haphazard and excessive—and the dash was at
the center of the melee.26

On its publication in 1993, M. B. Parkes’s Pause and Effect: An
Introduction to the History of Punctuation in the West was recog¬
nized as the most comprehensive and authoritative book yet pro¬
duced on the subject. Shady Characters owes an immense debt of
gratitude to Parkes and his book: without his exhaustive survey of
two millennia of punctuation, encompassing everything from Aris¬
tophanes to Virginia Woolf, this book—and no doubt many others
besides—could not have been written.* Ina review of Pause and Effect
written for the New Tork Review of Books, though, the author Nich¬
olson Baker chided Parkes for one particular omission: where, Baker
wondered, was the commash?27

That writers and printers suffered at one time from a tendency
or more precisely, from an irresistible, overweening need— to burden
the written word with unwonted punctuation first became apparent
in the seventeenth century. Early symptoms can be discerned in the

* Pause and Effect is discussed again in Further Reading.