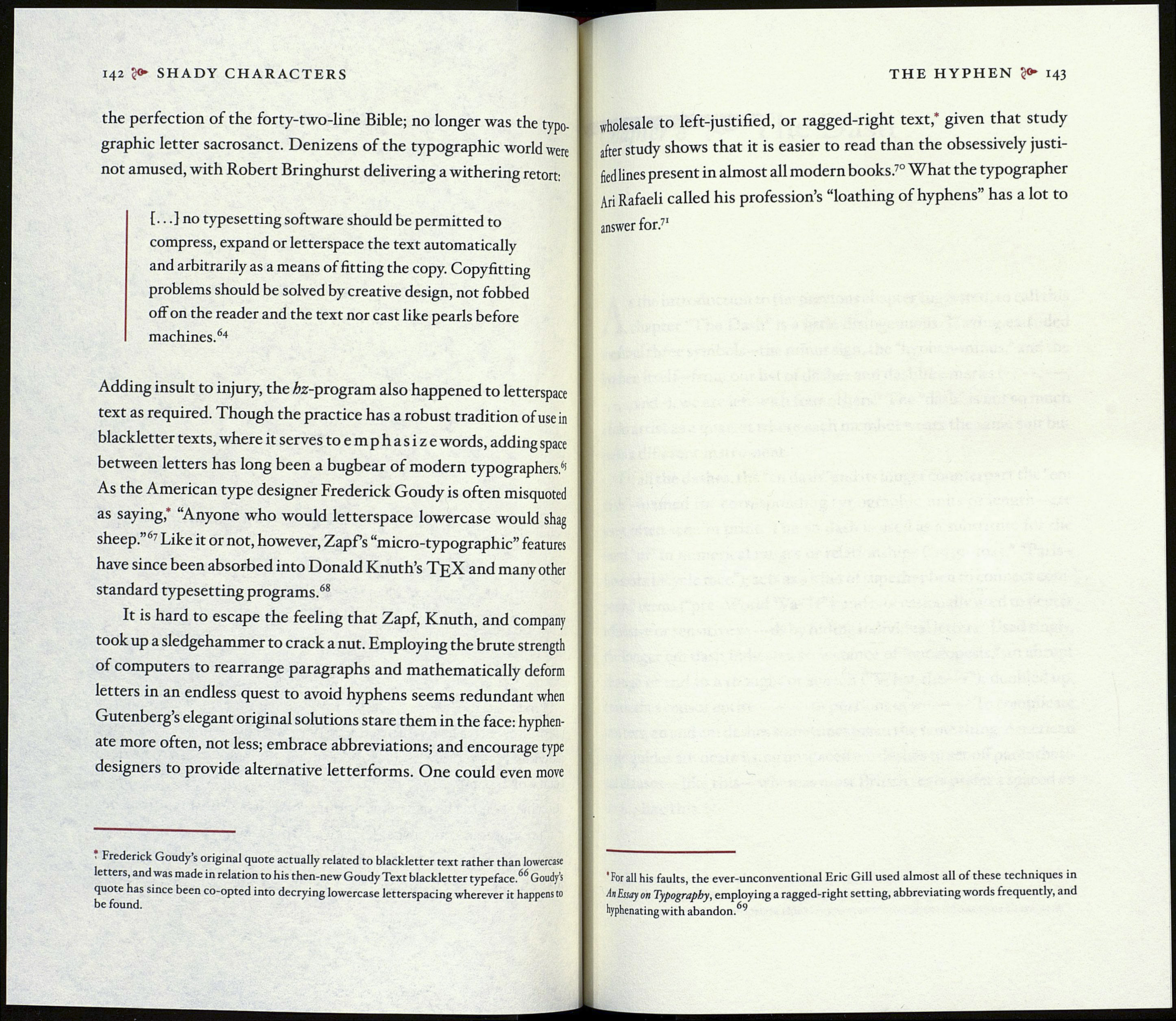 the perfection of the forty-two-line Bible; no longer was the typo¬
graphic letter sacrosanct. Denizens of the typographic world were
not amused, with Robert Bringhurst delivering a withering retort:

{...] no typesetting software should be permitted to
compress, expand or letterspace the text automatically
and arbitrarily as a means of fitting the copy. Copyfitting
problems should be solved by creative design, not fobbed
off on the reader and the text nor cast like pearls before
machines.64

Adding insult to injury, the Az-program also happened to letterspace
text as required. Though the practice has a robust tradition of use in
blackletter texts, where it serves to emphasize words, adding space
between letters has long been a bugbear of modern typographers.6*
As the American type designer Frederick Goudy is often misquoted
as saying,’ “Anyone who would letterspace lowercase would shag
sheep. 67 Like it or not, however, Zapf s “micro-typographic” features
have since been absorbed into Donald Knuth’s TeX and many other
standard typesetting programs.68

It is hard to escape the feeling that Zapf, Knuth, and company
took up a sledgehammer to crack a nut. Employing the brute strength
of computers to rearrange paragraphs and mathematically deform
letters in an endless quest to avoid hyphens seems redundant when
Gutenberg s elegant original solutions stare them in the face: hyphen¬
ate more often, not less; embrace abbreviations; and encourage type
designers to provide alternative letterforms. One could even move

' Freder‘ck Goudy’s original quote actually related to blackletter text rather than lowercase
letters, and was made in relation to his then-new Goudy Text blackletter typeface.66 Goudy’s
quote has since been co-opted into decrying lowercase letterspacing wherever it happens to
be found.

wholesale to left-justified, or ragged-right text,* given that study
after study shows that it is easier to read than the obsessively justi¬
fied lines present in almost all modern books.70 What the typographer
Ari Rafaeli called his profession’s “loathing of hyphens” has a lot to

'Forali his faults, the ever-unconventional Eric Gill used almost all of these techniques in
An Essay on Typography, employing a ragged-right setting, abbreviating words frequently, and
hyphenating with abandon.09