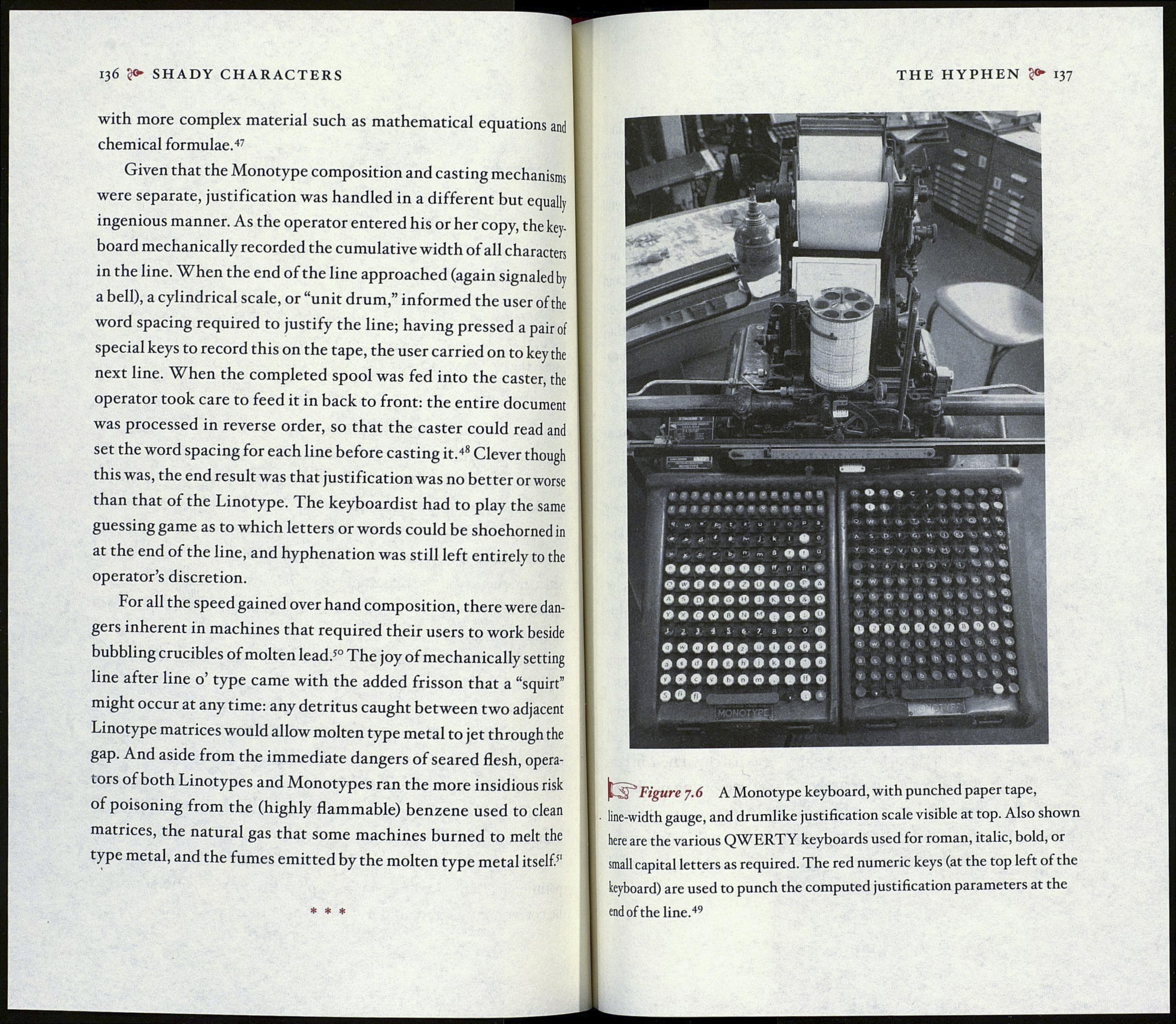 with more complex material such as mathematical equations and
chemical formulae.47

Given that the Monotype composition and casting mechanisms
were separate, justification was handled in a different but equally
ingenious manner. As the operator entered his or her copy, the key¬
board mechanically recorded the cumulative width of all characters
in the line. When the end of the line approached (again signaled by
a bell), a cylindrical scale, or “unit drum,” informed the user of the
word spacing required to justify the line; having pressed a pair of
special keys to record this on the tape, the user carried on to key the
next line. When the completed spool was fed into the caster, the
operator took care to feed it in back to front: the entire document
was processed in reverse order, so that the caster could read and
set the word spacing for each line before casting it.48 Clever though
this was, the end result was that justification was no better or worse
than that of the Linotype. The keyboardist had to play the same
guessing game as to which letters or words could be shoehorned in
at the end of the line, and hyphenation was still left entirely to the
operator’s discretion.

For all the speed gained over hand composition, there were dan¬
gers inherent in machines that required their users to work beside
bubbling crucibles of molten lead.50 The joy of mechanically setting
line after line o’ type came with the added frisson that a “squirt”
might occur at any time: any detritus caught between two adjacent
Linotype matrices would allow molten type metal to jet through the
gap. And aside from the immediate dangers of seared flesh, opera¬
tors of both Linotypes and Monotypes ran the more insidious risk
of poisoning from the (highly flammable) benzene used to clean
matrices, the natural gas that some machines burned to melt the
type metal, and the fumes emitted by the molten type metal itself.5'

Figure 7.6 A Monotype keyboard, with punched paper tape,
line-width gauge, and drumlike justification scale visible at top. Also shown
here are the various QWERTY keyboards used for roman, italic, bold, or
small capital letters as required. The red numeric keys (at the top left of the
keyboard) are used to punch the computed justification parameters at the
end of the line.49