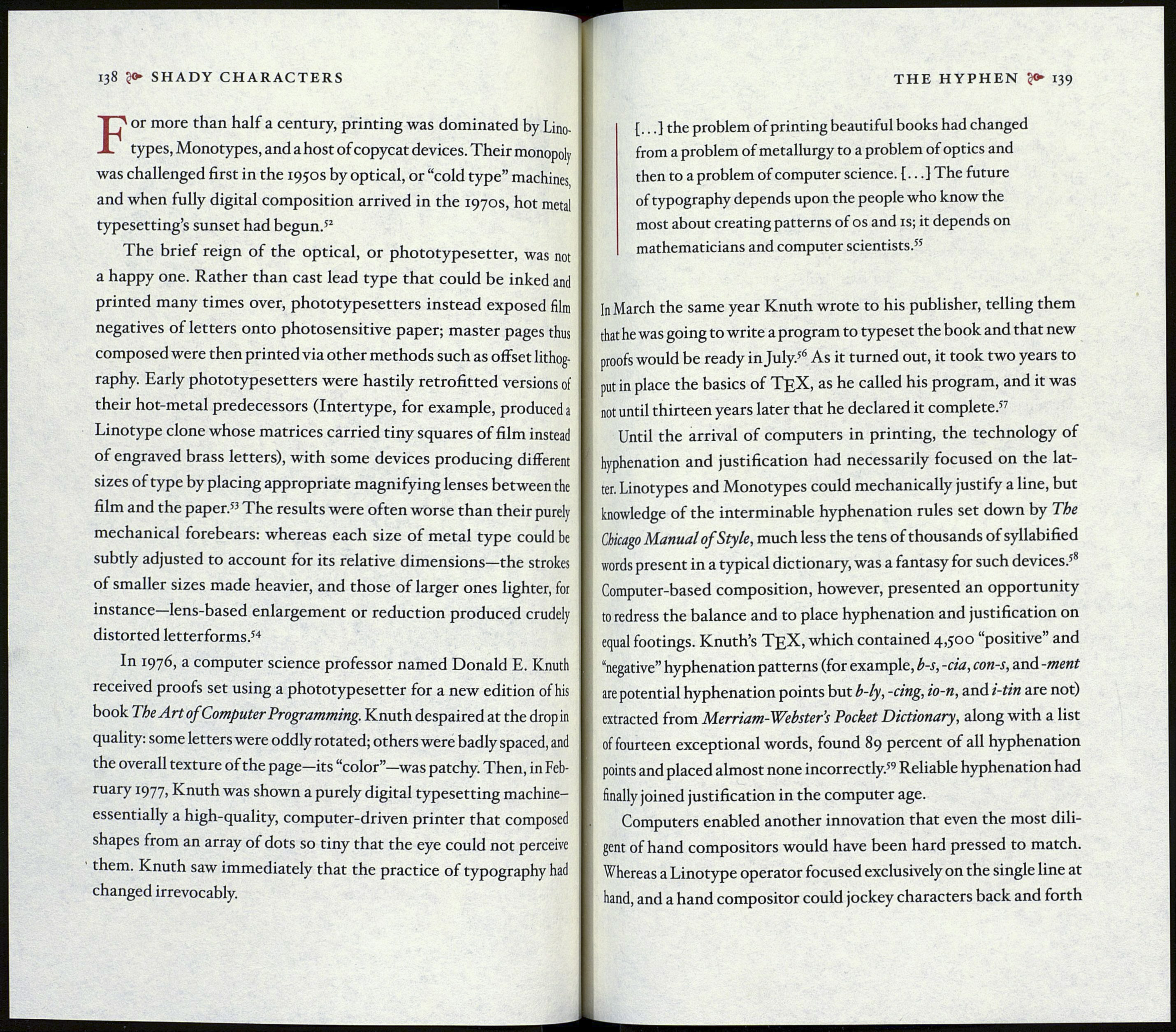 For more than half a century, printing was dominated by Lino¬
types, Monotypes, and a host of copycat devices. Their monopoly
was challenged first in the 1950s by optical, or “cold type” machines,
and when fully digital composition arrived in the 1970s, hot metal
typesetting’s sunset had begun.52

The brief reign of the optical, or phototypesetter, was not
a happy one. Rather than cast lead type that could be inked and
printed many times over, phototypesetters instead exposed film
negatives of letters onto photosensitive paper; master pages thus
composed were then printed via other methods such as offset lithog¬
raphy. Early phototypesetters were hastily retrofitted versions of
their hot-metal predecessors (Intertype, for example, produced a
Linotype clone whose matrices carried tiny squares of film instead
of engraved brass letters), with some devices producing different
sizes of type by placing appropriate magnifying lenses between the
film and the paper.53 The results were often worse than their purely
mechanical forebears: whereas each size of metal type could be
subtly adjusted to account for its relative dimensions—the strokes
of smaller sizes made heavier, and those of larger ones lighter, for
instance—lens-based enlargement or reduction produced crudely
distorted letterforms.54

In 1976, a computer science professor named Donald E. Knuth
received proofs set using a phototypesetter for a new edition of his
book The Art ofComputer Programming. Knuth despaired at the drop in
quality: some letters were oddly rotated; others were badly spaced, and
the overall texture of the page—its “color”—was patchy. Then, in Feb¬
ruary 1977, Knuth was shown a purely digital typesetting machine-
essentially a high-quality, computer-driven printer that composed
shapes from an array of dots so tiny that the eye could not perceive
them. Knuth saw immediately that the practice of typography had
changed irrevocably.

In March the same year Knuth wrote to his publisher, telling them
that he was going to write a program to typeset the book and that new
proofs would be ready in July.56 As it turned out, it took two years to
put in place the basics of TeX, as he called his program, and it was
not until thirteen years later that he declared it complete.57

Until the arrival of computers in printing, the technology of
hyphenation and justification had necessarily focused on the lat¬
ter. Linotypes and Monotypes could mechanically justify a line, but
knowledge of the interminable hyphenation rules set down by The
Chicago Manual of Style, much less the tens of thousands of syllabified
words present in a typical dictionary, was a fantasy for such devices.58
Computer-based composition, however, presented an opportunity
to redress the balance and to place hyphenation and justification on
equal footings. Knuth’s TeX, which contained 4,500 “positive” and
“negative” hyphenation patterns (for example, b-s, -eia, con-s, and -ment
are potential hyphenation points but b-ly, -cing, io-n, and i-tin are not)
extracted from Merriam-Webster’s Pocket Dictionary, along with a list
of fourteen exceptional words, found 89 percent of all hyphenation
points and placed almost none incorrectly.59 Reliable hyphenation had
finally joined justification in the computer age.

Computers enabled another innovation that even the most dili¬
gent of hand compositors would have been hard pressed to match.
Whereas a Linotype operator focused exclusively on the single line at
hand, and a hand compositor could jockey characters back and forth