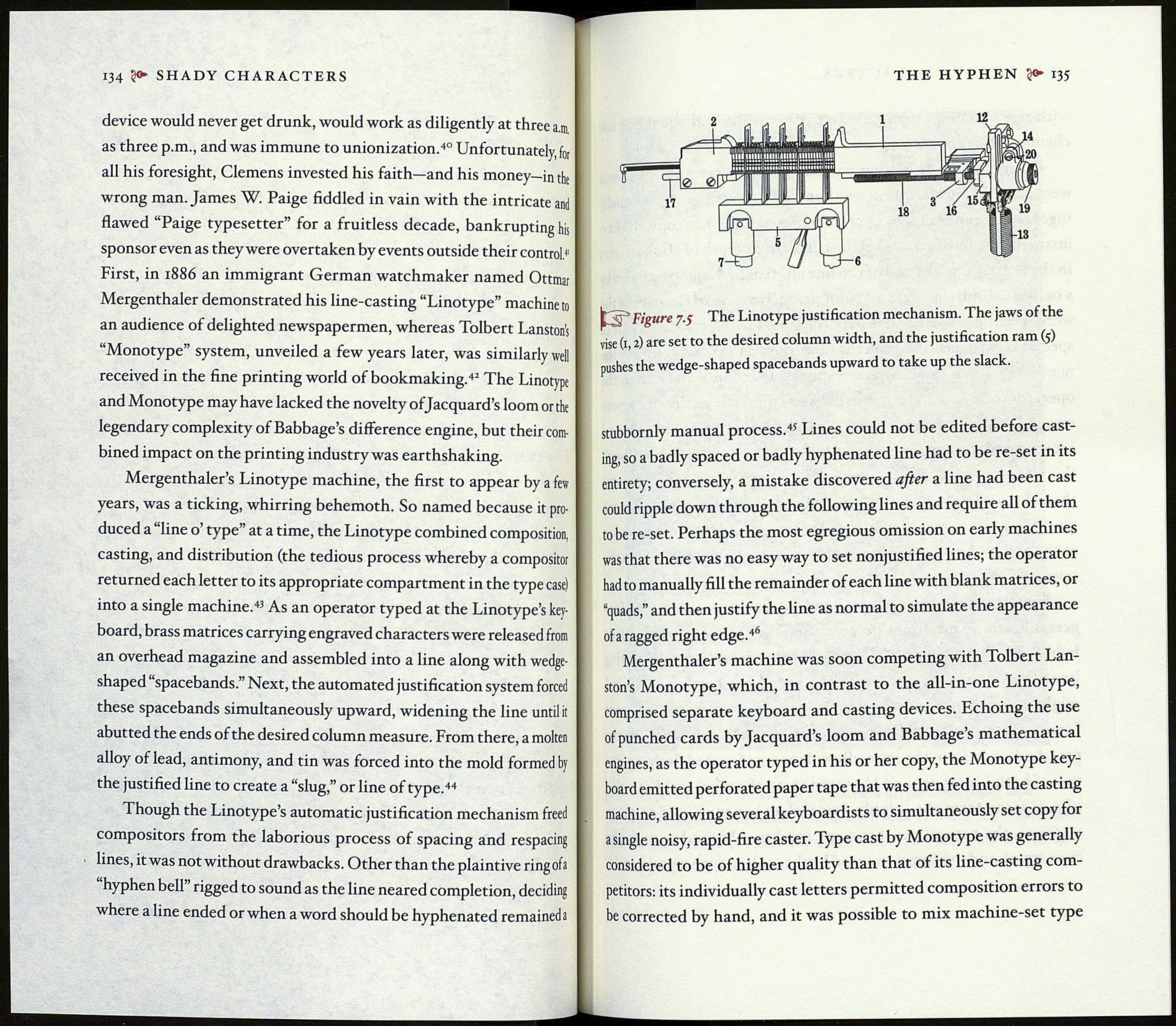 device would never get drunk, would work as diligently at three a.m
as three p.m., and was immune to unionization.40 Unfortunately, for
all his foresight, Clemens invested his faith—and his money-in the
wrong man. James W. Paige fiddled in vain with the intricate and
flawed “Paige typesetter” for a fruitless decade, bankrupting his
sponsor even as they were overtaken by events outside their control.«'
First, in 1886 an immigrant German watchmaker named Ottmar
Mergenthaler demonstrated his line-casting “Linotype” machine to
an audience of delighted newspapermen, whereas Tolbert Lanston's
“Monotype” system, unveiled a few years later, was similarly well
received in the fine printing world of bookmaking.42 The Linotype
and Monotype may have lacked the novelty of Jacquard’s loom or the
legendary complexity of Babbage’s difference engine, but their com¬
bined impact on the printing industry was earthshaking.

Mergenthaler’s Linotype machine, the first to appear by a few
years, was a ticking, whirring behemoth. So named because it pro¬
duced a “line o’ type” at a time, the Linotype combined composition,
casting, and distribution (the tedious process whereby a compositor
returned each letter to its appropriate compartment in the type case)
into a single machine.43 As an operator typed at the Linotype’s key¬
board, brass matrices carrying engraved characters were released from
an overhead magazine and assembled into a line along with wedge-
shaped spacebands.” Next, the automated justification system forced
these spacebands simultaneously upward, widening the line until it
abutted the ends of the desired column measure. From there, a molten
alloy of lead, antimony, and tin was forced into the mold formed by
the justified line to create a “slug,” or line of type.44

Though the Linotype’s automatic justification mechanism freed
compositors from the laborious process of spacing and respacing
lines, it was not without drawbacks. Other than the plaintive ringoia
hyphen bell rigged to sound as the line neared completion, deciding
where a line ended or when a word should be hyphenated remained a

Figure 7.3 The Linotype justification mechanism. The jaws of the
vise (1,2) are set to the desired column width, and the justification ram (3)
pushes the wedge-shaped spacebands upward to take up the slack.

stubbornly manual process.45 Lines could not be edited before cast¬
ing, so a badly spaced or badly hyphenated line had to be re-set in its
entirety; conversely, a mistake discovered after a line had been cast
could ripple down through the following lines and require all of them
tobe re-set. Perhaps the most egregious omission on early machines
was that there was no easy way to set nonjustified lines; the operator
had to manually fill the remainder of each line with blank matrices, or
“quads,” and then justify the line as normal to simulate the appearance
of a ragged right edge.46

Mergenthaler’s machine was soon competing with Tolbert Lan-
ston’s Monotype, which, in contrast to the all-in-one Linotype,
comprised separate keyboard and casting devices. Echoing the use
of punched cards by Jacquard’s loom and Babbage’s mathematical
engines, as the operator typed in his or her copy, the Monotype key¬
board emitted perforated paper tape that was then fed into the casting
machine, allowing several keyboardists to simultaneously set copy for
a single noisy, rapid-fire caster. Type cast by Monotype was generally
considered to be of higher quality than that of its line-casting com¬
petitors: its individually cast letters permitted composition errors to
be corrected by hand, and it was possible to mix machine-set type