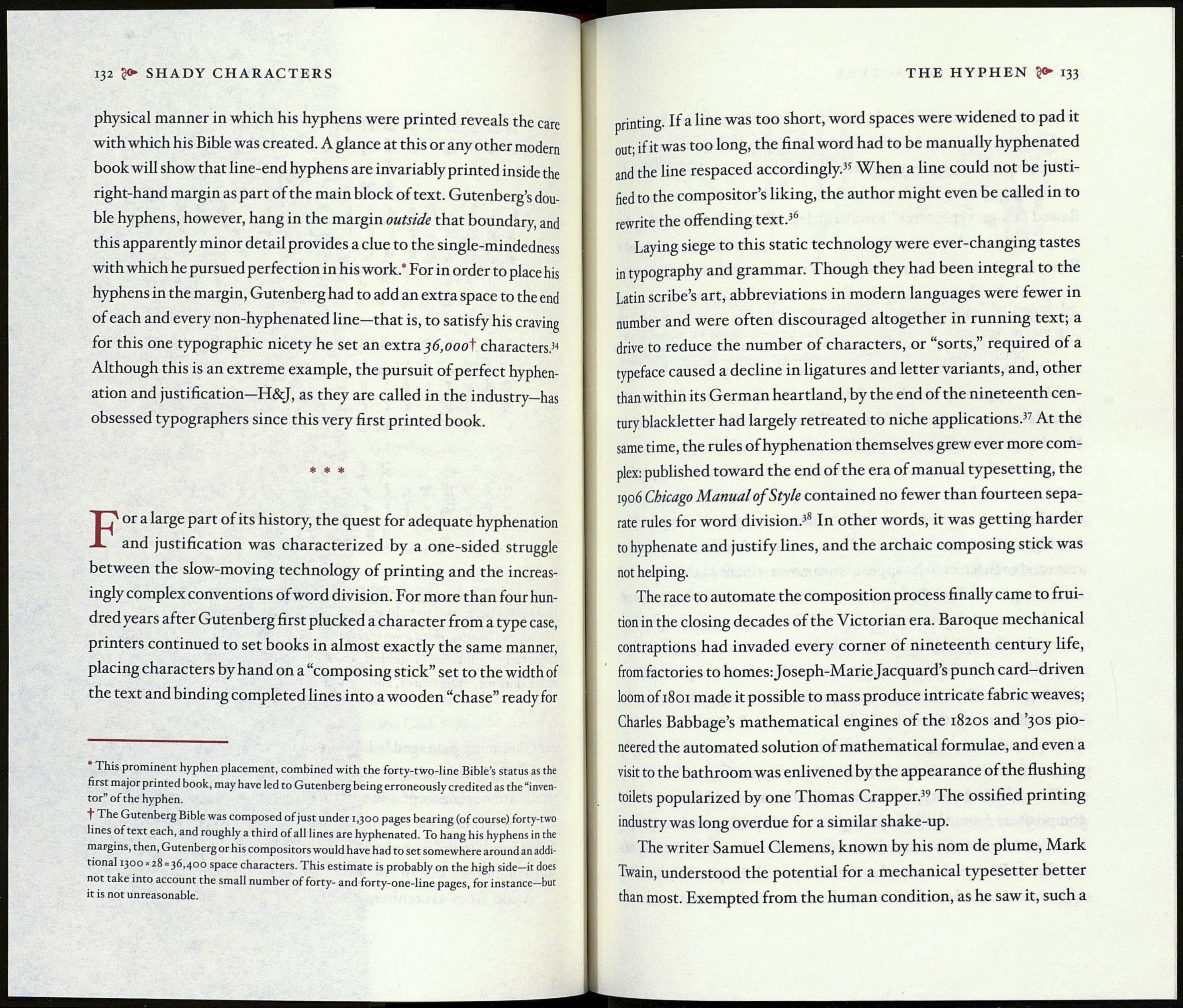 physical manner in which his hyphens were printed reveals the care
with which his Bible was created. A glance at this or any other modern
book will show that line-end hyphens are invariably printed inside the
right-hand margin as part of the main block of text. Gutenberg’s dou¬
ble hyphens, however, hang in the margin outside that boundary, and
this apparently minor detail provides a clue to the single-mindedness
with which he pursued perfection in his work.* For in order to place his
hyphens in the margin, Gutenberg had to add an extra space to the end
of each and every non-hyphenated line—that is, to satisfy his craving
for this one typographic nicety he set an extra36,000t characters.”
Although this is an extreme example, the pursuit of perfect hyphen¬
ation and justification—H&J, as they are called in the industry-has
obsessed typographers since this very first printed book.

For a large part of its history, the quest for adequate hyphenation
and justification was characterized by a one-sided struggle
between the slow-moving technology of printing and the increas¬
ingly complex conventions of word division. For more than four hun¬
dred years after Gutenberg first plucked a character from a type case,
printers continued to set books in almost exactly the same manner,
placing characters by hand on a “composing stick” set to the width of
the text and binding completed lines into a wooden “chase” ready for

This prominent hyphen placement, combined with the forty-two-line Bible’s status as the
first major printed book, may have led to Gutenberg being erroneously credited as the “inven¬
tor” of the hyphen.

■f The Gutenberg Bible was composed of just under 1,300 pages bearing (of course) forty-two
lines of text each, and roughly a third of all lines are hyphenated. To hang his hyphens in the
margins, then, Gutenberg or his compositors would have had to set somewhere around an addi¬
tional 1300 * 28 = 36,400 space characters. This estimate is probably on the high side—it does
not take into account the small number of forty- and forty-one-line pages, for instance—but
it is not unreasonable.

printing. If a line was too short, word spaces were widened to pad it
out; if it was too long, the final word had to be manually hyphenated
and the line respaced accordingly.35 When a line could not be justi¬
fied to the compositor’s liking, the author might even be called in to
rewrite the offending text.36

Laying siege to this static technology were ever-changing tastes
in typography and grammar. Though they had been integral to the
Latin scribe’s art, abbreviations in modern languages were fewer in
number and were often discouraged altogether in running text; a
drive to reduce the number of characters, or “sorts,” required of a
typeface caused a decline in ligatures and letter variants, and, other
than within its German heartland, by the end of the nineteenth cen¬
tury blackletter had largely retreated to niche applications.37 At the
same time, the rules of hyphenation themselves grew ever more com¬
plex: published toward the end of the era of manual typesetting, the
1906 Chicago Manual of Style contained no fewer than fourteen sepa¬
rate rules for word division.38 In other words, it was getting harder
to hyphenate and justify lines, and the archaic composing stick was
not helping.

The race to automate the composition process finally came to frui¬
tion in the closing decades of the Victorian era. Baroque mechanical
contraptions had invaded every corner of nineteenth century life,
from factories to homes: Joseph-Marie Jacquard’s punch card-driven
loom of 1801 made it possible to mass produce intricate fabric weaves;
Charles Babbage’s mathematical engines of the 1820s and ’30s pio¬
neered the automated solution of mathematical formulae, and even a
visit to the bathroom was enlivened by the appearance of the flushing
toilets popularized by one Thomas Crapper.39 The ossified printing
industry was long overdue for a similar shake-up.

The writer Samuel Clemens, known by his nom de plume, Mark
Twain, understood the potential for a mechanical typesetter better
than most. Exempted from the human condition, as he saw it, such a