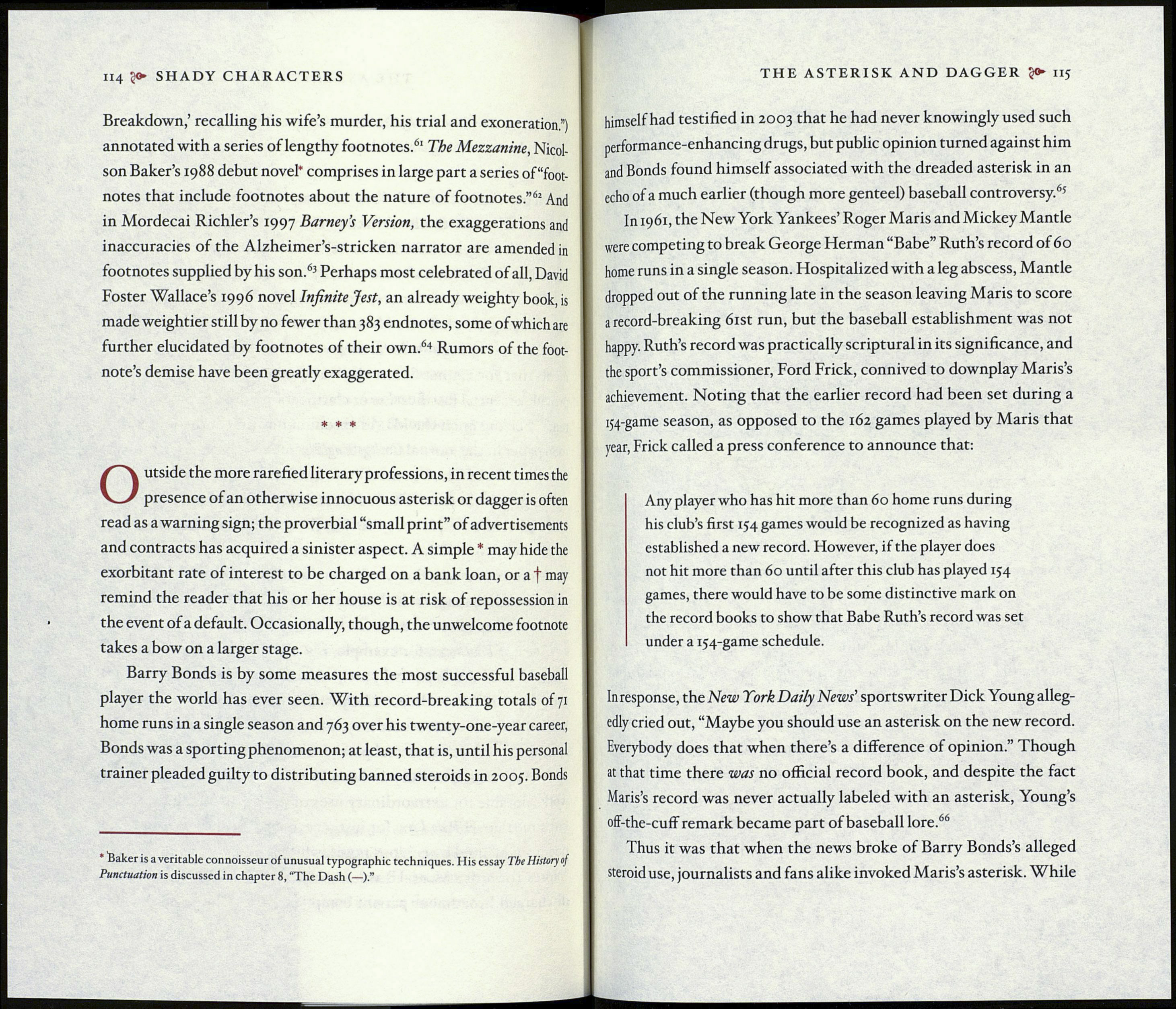 Breakdown,’ recalling his wife’s murder, his trial and exoneration”)
annotated with a series of lengthy footnotes.6' The Mezzanine, Nicol-
son Baker’s 1988 debut novel* comprises in large part a series of “foot¬
notes that include footnotes about the nature of footnotes.”62 And
in Mordecai Richler’s 1997 Barney’s Version, the exaggerations and
inaccuracies of the Alzheimer’s-stricken narrator are amended in
footnotes supplied by his son.63 Perhaps most celebrated of all, David
Foster Wallace’s 1996 novel Infinite Jest, an already weighty book, is
made weightier still by no fewer than 383 endnotes, some ofwhich are
further elucidated by footnotes of their own.64 Rumors of the foot¬
note’s demise have been greatly exaggerated.

Outside the more rarefied literary professions, in recent times the
presence of an otherwise innocuous asterisk or dagger is often
read as a warning sign; the proverbial “small print” of advertisements
and contracts has acquired a sinister aspect. A simple * may hide the
exorbitant rate of interest to be charged on a bank loan, or a f may
remind the reader that his or her house is at risk of repossession in
the event of a default. Occasionally, though, the unwelcome footnote
takes a bow on a larger stage.

Barry Bonds is by some measures the most successful baseball
player the world has ever seen. With record-breaking totals of 71
home runs in a single season and 763 over his twenty-one-year career,
Bonds was a sporting phenomenon; at least, that is, until his personal
trainer pleaded guilty to distributing banned steroids in 2005. Bonds

* Raker is a veritable connoisseur of unusual typographic techniques. His essay The History of
Punctuation is discussed in chapter 8, ‘The Dash

himself had testified in 2003 that he had never knowingly used such
performance-enhancing drugs, but public opinion turned against him
and Bonds found himself associated with the dreaded asterisk in an
echo of a much earlier (though more genteel) baseball controversy.65

In 1961, the New York Yankees’ Roger Maris and Mickey Mantle
were competing to break George Herman “Babe” Ruth’s record of 60
home runs in a single season. Hospitalized with a leg abscess, Mantle
dropped out of the running late in the season leaving Maris to score
a record-breaking 61st run, but the baseball establishment was not
happy. Ruth’s record was practically scriptural in its significance, and
the sport’s commissioner, Ford Frick, connived to downplay Maris’s
achievement. Noting that the earlier record had been set during a
154-game season, as opposed to the 162 games played by Maris that
year, Frick called a press conference to announce that:

Any player who has hit more than 60 home runs during
his club’s first 154 games would be recognized as having
established a new record. However, if the player does
not hit more than 60 until after this club has played 154
games, there would have to be some distinctive mark on
the record books to show that Babe Ruth’s record was set
under a 154-game schedule.

In response, the New York Daily News’ sportswriter Dick Young alleg¬
edly cried out, “Maybe you should use an asterisk on the new record.
Everybody does that when there’s a difference of opinion.” Though
at that time there was no official record book, and despite the fact
Maris’s record was never actually labeled with an asterisk, Young’s
off-the-cuff remark became part of baseball lore.66

Thus it was that when the news broke of Barry Bonds’s alleged
steroid use, journalists and fans alike invoked Maris’s asterisk. While