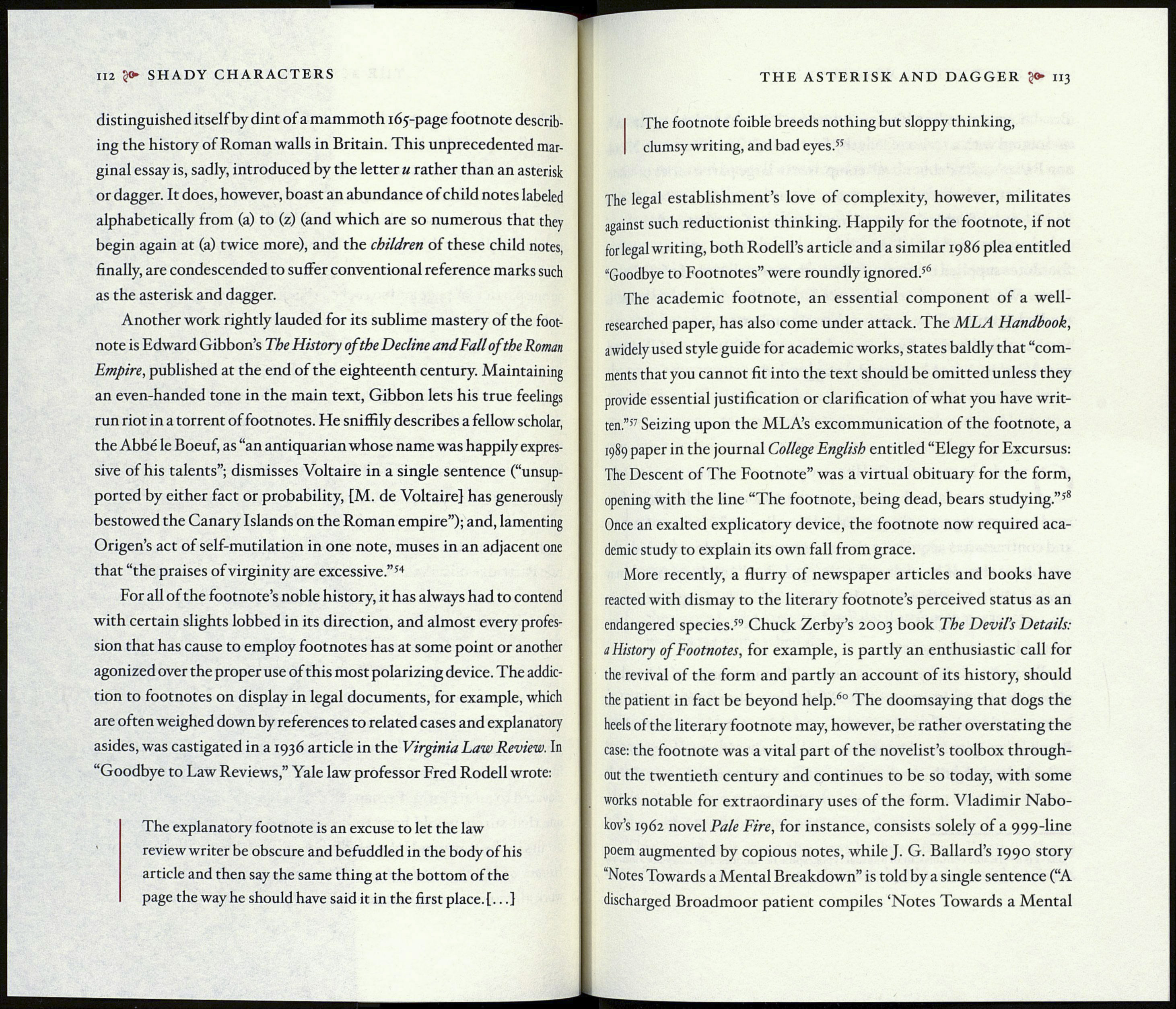 distinguished itself by dint of a mammoth 165-page footnote describ¬
ing the history of Roman walls in Britain. This unprecedented mar¬
ginal essay is, sadly, introduced by the letter и rather than an asterisk
or dagger. It does, however, boast an abundance of child notes labeled
alphabetically from (a) to (z) (and which are so numerous that they
begin again at (a) twice more), and the children of these child notes,
finally, are condescended to suffer conventional reference marks such
as the asterisk and dagger.

Another work rightly lauded for its sublime mastery of the foot¬
note is Edward Gibbon’s The History of the Decline and Fall of the Roman
Empire, published at the end of the eighteenth century. Maintaining
an even-handed tone in the main text, Gibbon lets his true feelings
run riot in a torrent of footnotes. He sniffily describes a fellow scholar,
the Abbé le Boeuf, as “an antiquarian whose name was happily expres¬
sive of his talents”; dismisses Voltaire in a single sentence (“unsup¬
ported by either fact or probability, [M. de Voltaire] has generously
bestowed the Canary Islands on the Roman empire”); and, lamenting
Origen’s act of self-mutilation in one note, muses in an adjacent one
that “the praises of virginity are excessive.”54

For all of the footnote’s noble history, it has always had to contend
with certain slights lobbed in its direction, and almost every profes¬
sion that has cause to employ footnotes has at some point or another
agonized over the proper use of this most polarizing device. The addic¬
tion to footnotes on display in legal documents, for example, which
are often weighed down by references to related cases and explanatory
asides, was castigated in a 1936 article in the Virginia Law Review. In
“Goodbye to Law Reviews,” Yale law professor Fred Rodell wrote:

The explanatory footnote is an excuse to let the law
review writer be obscure and befuddled in the body of his
article and then say the same thing at the bottom of the
page the way he should have said it in the first place.]...}

THE ASTERISK AND DAGGER 113

The footnote foible breeds nothing but sloppy thinking,
clumsy writing, and bad eyes.55

The legal establishment’s love of complexity, however, militates
against such reductionist thinking. Happily for the footnote, if not
for legal writing, both Rodell’s article and a similar 1986 plea entitled
“Goodbye to Footnotes” were roundly ignored.56

The academic footnote, an essential component of a well-
researched paper, has also come under attack. The MLA Handbook,
a widely used style guide for academic works, states baldly that “com¬
ments that you cannot fit into the text should be omitted unless they
provide essential justification or clarification of what you have writ¬
ten.”57 Seizing upon the MLA’s excommunication of the footnote, a
19S9 paper in the journal College English entitled “Elegy for Excursus:
The Descent of The Footnote” was a virtual obituary for the form,
opening with the line “The footnote, being dead, bears studying.”58
Once an exalted explicatory device, the footnote now required aca¬
demic study to explain its own fall from grace.

More recently, a flurry of newspaper articles and books have
reacted with dismay to the literary footnote’s perceived status as an
endangered species.59 Chuck Zerby’s 2003 book The Devil’s Details:
a History of Footnotes, for example, is partly an enthusiastic call for
the revival of the form and partly an account of its history, should
the patient in fact be beyond help.60 The doomsaying that dogs the
heels of the literary footnote may, however, be rather overstating the
case: the footnote was a vital part of the novelist’s toolbox through¬
out the twentieth century and continues to be so today, with some
works notable for extraordinary uses of the form. Vladimir Nabo¬
kov’s 1962 novel Pale Fire, for instance, consists solely of a 999-line
poem augmented by copious notes, while J. G. Ballard’s 1990 story
“Notes Towards a Mental Breakdown” is told by a single sentence (“A
discharged Broadmoor patient compiles ‘Notes Towards a Mental