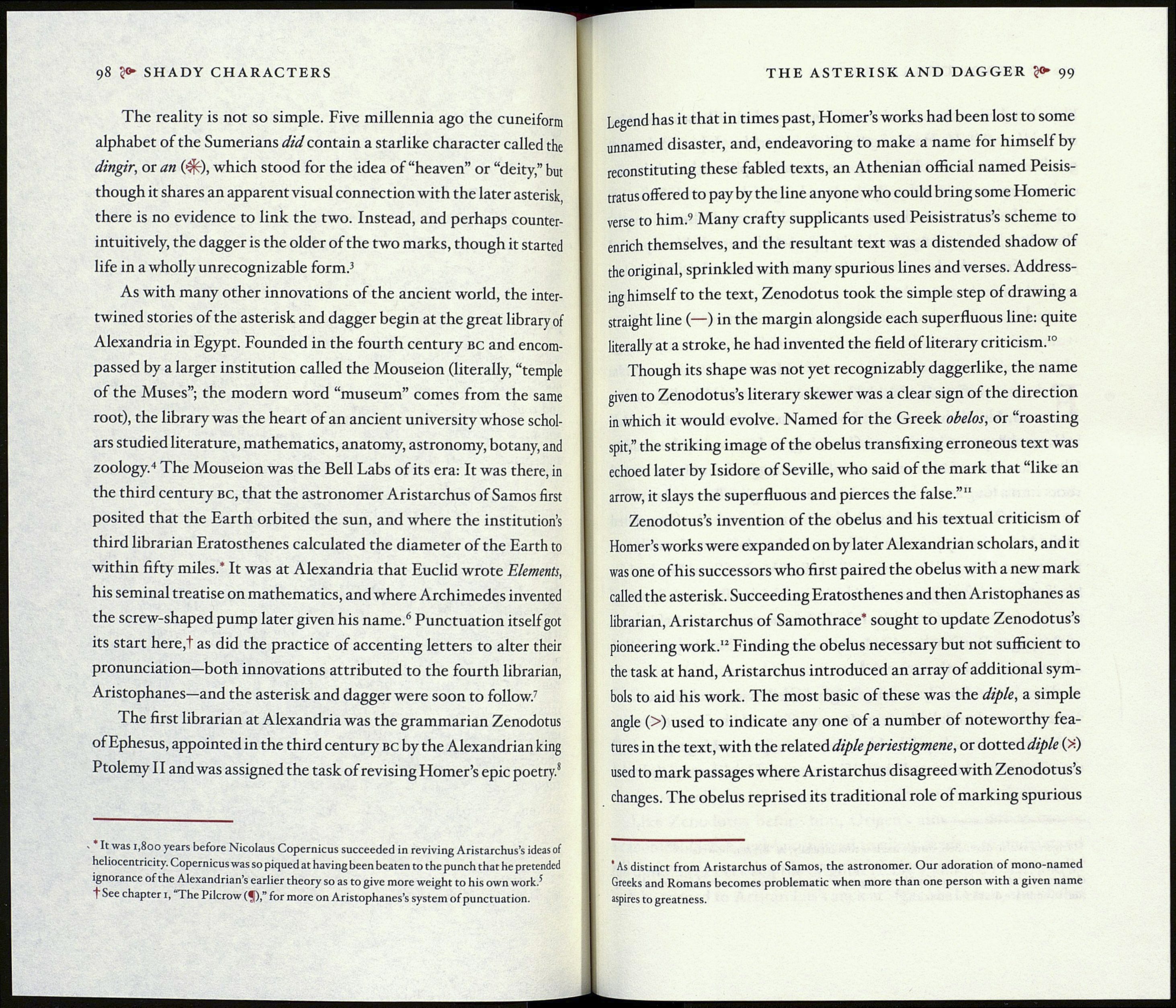 The reality is not so simple. Five millennia ago the cuneiform
alphabet of the Sumerians did contain a starlike character called the
dingir, or an (sT), which stood for the idea of “heaven” or “deity,” but
though it shares an apparent visual connection with the later asterisk,
there is no evidence to link the two. Instead, and perhaps counter¬
intuitively, the dagger is the older of the two marks, though it started
life in a wholly unrecognizable form.3

As with many other innovations of the ancient world, the inter¬
twined stories of the asterisk and dagger begin at the great library of
Alexandria in Egypt. Founded in the fourth century вс and encom¬
passed by a larger institution called the Mouseion (literally, “temple
of the Muses”; the modern word “museum” comes from the same
root), the library was the heart of an ancient university whose schol¬
ars studied literature, mathematics, anatomy, astronomy, botany, and
zoology.4 The Mouseion was the Bell Labs of its era: It was there, in
the third century вс, that the astronomer Aristarchus of Samos first
posited that the Earth orbited the sun, and where the institution’s
third librarian Eratosthenes calculated the diameter of the Earth to
within fifty miles.* It was at Alexandria that Euclid wrote Elements,
his seminal treatise on mathematics, and where Archimedes invented
the screw-shaped pump later given his name.6 Punctuation itself got
its start here,t as did the practice of accenting letters to alter their
pronunciation—both innovations attributed to the fourth librarian,
Aristophanes—and the asterisk and dagger were soon to follow.7

The first librarian at Alexandria was the grammarian Zenodotus
of Ephesus, appointed in the third century вс by the Alexandrian king
Ptolemy II and was assigned the task of revising Homer’s epic poetry.8

It was i,800 years before Nicolaus Copernicus succeeded in reviving Aristarchus’s ideas of
hcliocentricity. Copernicus was so piqued at having been beaten to the punch that he pretended
ignorance of the Alexandrian’s earlier theory so as to give more weight to his own work.3
t See chapter 1, The Pilcrow (f),” for more on Aristophanes’s system of punctuation.

THE ASTERISK AND DAGGER 99

Legend has it that in times past, Homer’s works had been lost to some
unnamed disaster, and, endeavoring to make a name for himself by
reconstituting these fabled texts, an Athenian official named Peisis-
tratus offered to pay by the line anyone who could bring some Homeric
verse to him.9 Many crafty supplicants used Peisistratus’s scheme to
enrich themselves, and the resultant text was a distended shadow of
the original, sprinkled with many spurious lines and verses. Address¬
ing himself to the text, Zenodotus took the simple step of drawing a
straight line (—) in the margin alongside each superfluous line: quite
literally at a stroke, he had invented the field of literary criticism.10

Though its shape was not yet recognizably daggerlike, the name
given to Zenodotus’s literary skewer was a clear sign of the direction
in which it would evolve. Named for the Greek obelos, or “roasting
spit,” the striking image of the obelus transfixing erroneous text was
echoed later by Isidore of Seville, who said of the mark that “like an
arrow, it slays the superfluous and pierces the false.”11

Zenodotus’s invention of the obelus and his textual criticism of
Homer’s works were expanded on by later Alexandrian scholars, and it
was one of his successors who first paired the obelus with a new mark
called the asterisk. Succeeding Eratosthenes and then Aristophanes as
librarian, Aristarchus of Samothrace’ sought to update Zenodotus’s
pioneering work.1* Finding the obelus necessary but not sufficient to
the task at hand, Aristarchus introduced an array of additional sym¬
bols to aid his work. The most basic of these was the diple, a simple
angle (>) used to indicate any one of a number of noteworthy fea¬
tures in the text, with the related dipleperiestigmene, or dotted diple {>)
used to mark passages where Aristarchus disagreed with Zenodotus’s
changes. The obelus reprised its traditional role of marking spurious

* As distinct from Aristarchus of Samos, the astronomer. Our adoration of mono-named
Greeks and Romans becomes problematic when more than one person with a given name
aspires to greatness.