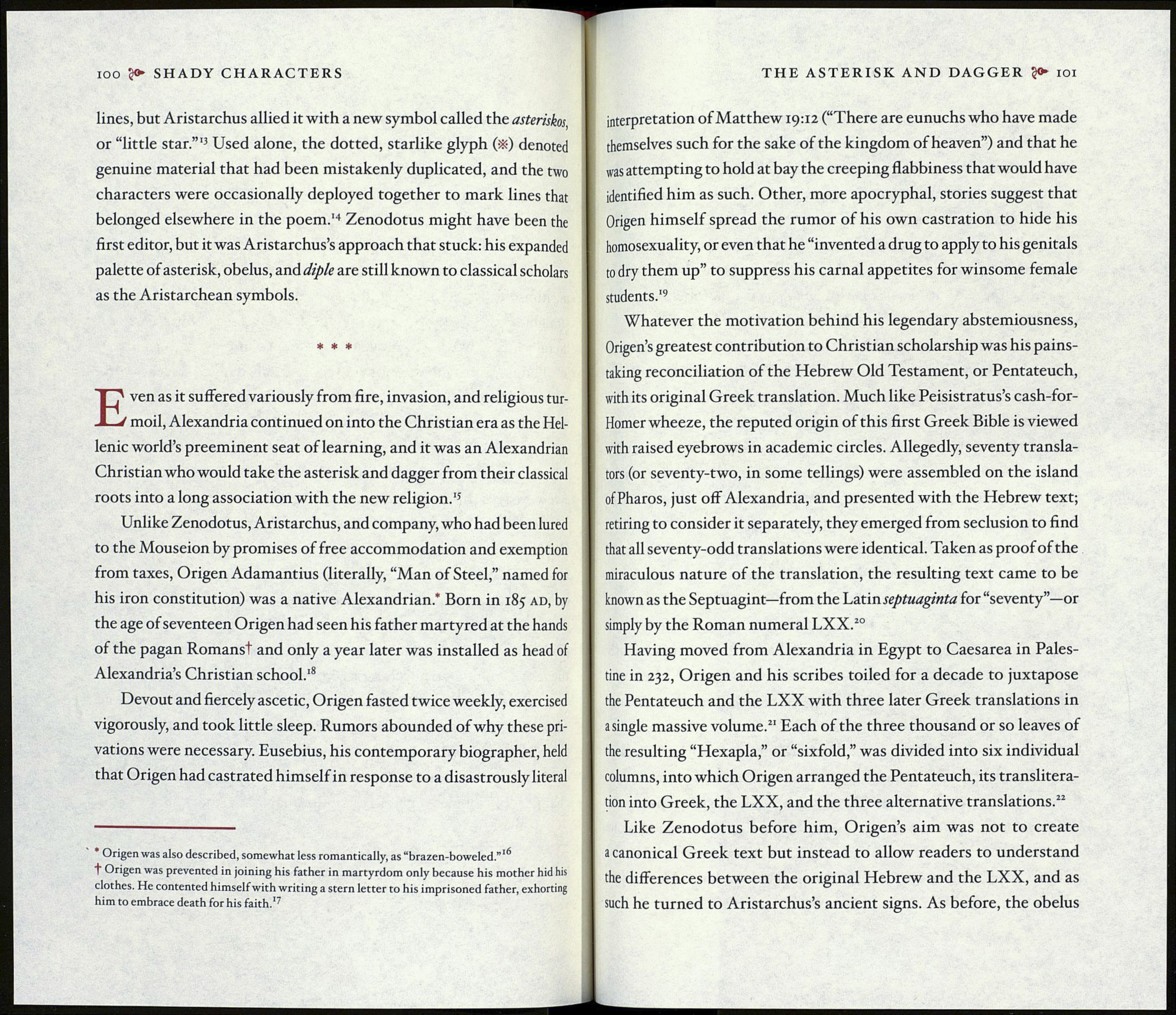 lines, but Aristarchus allied it with a new symbol called the asteriskos,
or “little star.”4 Used alone, the dotted, starlike glyph (ss) denoted
genuine material that had been mistakenly duplicated, and the two
characters were occasionally deployed together to mark lines that
belonged elsewhere in the poem.’4 Zenodotus might have been the
first editor, but it was Aristarchus’s approach that stuck: his expanded
palette of asterisk, obelus, and diple are still known to classical scholars
as the Aristarchean symbols.

Even as it suffered variously from fire, invasion, and religious tur¬
moil, Alexandria continued on into the Christian era as the Hel¬
lenic world’s preeminent seat of learning, and it was an Alexandrian
Christian who would take the asterisk and dagger from their classical
roots into a long association with the new religion.’5

Unlike Zenodotus, Aristarchus, and company, who had been lured
to the Mouseion by promises of free accommodation and exemption
from taxes, Origen Adamantius (literally, “Man of Steel,” named for
his iron constitution) was a native Alexandrian.* Born in 185 ad, by
the age of seventeen Origen had seen his father martyred at the hands
of the pagan Romanst and only a year later was installed as head of
Alexandria’s Christian school.’8

Devout and fiercely ascetic, Origen fasted twice weekly, exercised
vigorously, and took little sleep. Rumors abounded of why these pri¬
vations were necessary. Eusebius, his contemporary biographer, held
that Origen had castrated himself in response to a disastrously literal

* Origen was also described, somewhat less romantically, as “brazen-boweled.”’6
t Origen was prevented in joining his father in martyrdom only because his mother hid his
clothes. He contented himself with writing a stern letter to his imprisoned father, exhorting
him to embrace death for his faith.’7

interpretation of Matthew 19:12 (“There are eunuchs who have made
themselves such for the sake of the kingdom of heaven”) and that he
was attempting to hold at bay the creeping flabbiness that would have
identified him as such. Other, more apocryphal, stories suggest that
Origen himself spread the rumor of his own castration to hide his
homosexuality, or even that he “invented a drug to apply to his genitals
to dry them up” to suppress his carnal appetites for winsome female
students.’9

Whatever the motivation behind his legendary abstemiousness,
Origen’s greatest contribution to Christian scholarship was his pains¬
taking reconciliation of the Hebrew Old Testament, or Pentateuch,
with its original Greek translation. Much like Peisistratus’s cash-for-
Homer wheeze, the reputed origin of this first Greek Bible is viewed
with raised eyebrows in academic circles. Allegedly, seventy transla¬
tors (or seventy-two, in some tellings) were assembled on the island
of Pharos, just off Alexandria, and presented with the Hebrew text;
retiring to consider it separately, they emerged from seclusion to find
that all seventy-odd translations were identical. Taken as proof of the
miraculous nature of the translation, the resulting text came to be
known as the Septuagint—from the Latinseptuaginta for “seventy”—or
simply by the Roman numeral LXX.20

Having moved from Alexandria in Egypt to Caesarea in Pales¬
tine in 232, Origen and his scribes toiled for a decade to juxtapose
the Pentateuch and the LXX with three later Greek translations in
a single massive volume.2' Each of the three thousand or so leaves of
the resulting “Hexapla,” or “sixfold,” was divided into six individual
columns, into which Origen arranged the Pentateuch, its translitera¬
tion into Greek, the LXX, and the three alternative translations.22

Like Zenodotus before him, Origen’s aim was not to create
a canonical Greek text but instead to allow readers to understand
the differences between the original Hebrew and the LXX, and as
such he turned to Aristarchus’s ancient signs. As before, the obelus