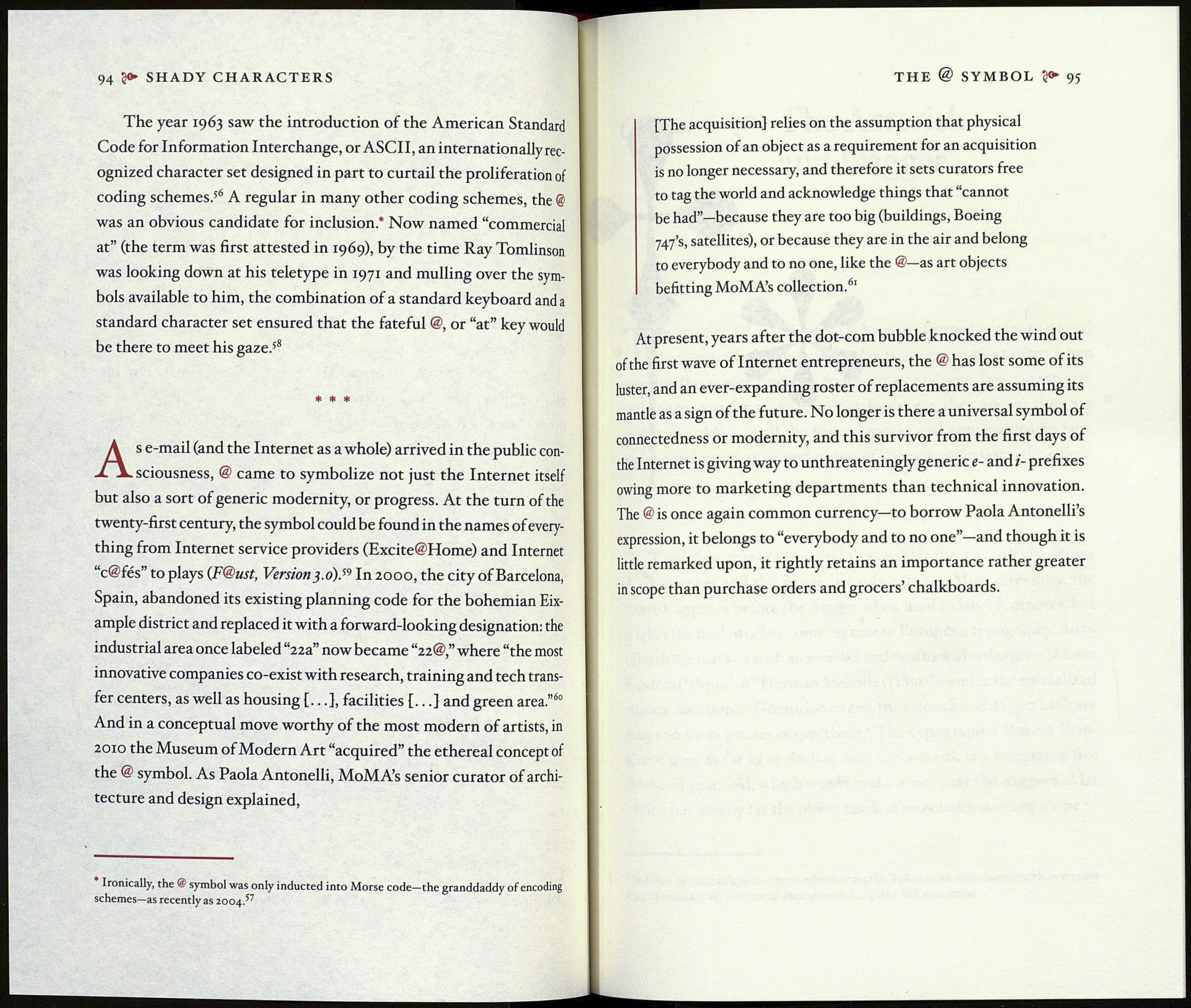 The year 1963 saw the introduction of the American Standard
Code for Information Interchange, or ASCII, an internationally rec¬
ognized character set designed in part to curtail the proliferation of
coding schemes.56 A regular in many other coding schemes, the @
was an obvious candidate for inclusion.* Now named “commercial
at” (the term was first attested in 1969), by the time Ray Tomlinson
was looking down at his teletype in 1971 and mulling over the sym¬
bols available to him, the combination of a standard keyboard and a
standard character set ensured that the fateful @, or “at” key would
be there to meet his gaze.58

As e-mail (and the Internet as a whole) arrived in the public con¬
sciousness, @ came to symbolize not just the Internet itself
but also a sort of generic modernity, or progress. At the turn of the
twenty-first century, the symbol could be found in the names of every¬
thing from Internet service providers (Excite@Home) and Internet
“c@fés” to plays (F@ust, Version 3.0).59 In 2000, the city of Barcelona,
Spain, abandoned its existing planning code for the bohemian Eix-
ample district and replaced it with a forward-looking designation: the
industrial area once labeled “22a” now became “22@,” where “the most
innovative companies co-exist with research, training and tech trans¬
fer centers, as well as housing {...}, facilities {...} and green area.”60
And in a conceptual move worthy of the most modern of artists, in
2010 the Museum of Modern Art “acquired” the ethereal concept of
the @ symbol. As Paola Antonelli, MoMA’s senior curator of archi¬
tecture and design explained,

Ironically, the @ symbol was only inducted into Morse code—the granddaddy of encoding
schemes—as recently as 2004.*7

[The acquisition] relies on the assumption that physical
possession of an object as a requirement for an acquisition
is no longer necessary, and therefore it sets curators free
to tag the world and acknowledge things that “cannot
be had”—because they are too big (buildings, Boeing
747’s, satellites), or because they are in the air and belong
to everybody and to no one, like the as art objects
befitting MoMA’s collection.61

At present, years after the dot-com bubble knocked the wind out
of the first wave of Internet entrepreneurs, the @ has lost some of its
luster, and an ever-expanding roster of replacements are assuming its
mantle as a sign of the future. No longer is there a universal symbol of
connectedness or modernity, and this survivor from the first days of
the Internet is giving way to unthreateningly generic e- and i- prefixes
owing more to marketing departments than technical innovation.
The @ is once again common currency—to borrow Paola Antonelli’s
expression, it belongs to “everybody and to no one”—and though it is
little remarked upon, it rightly retains an importance rather greater
in scope than purchase orders and grocers’ chalkboards.