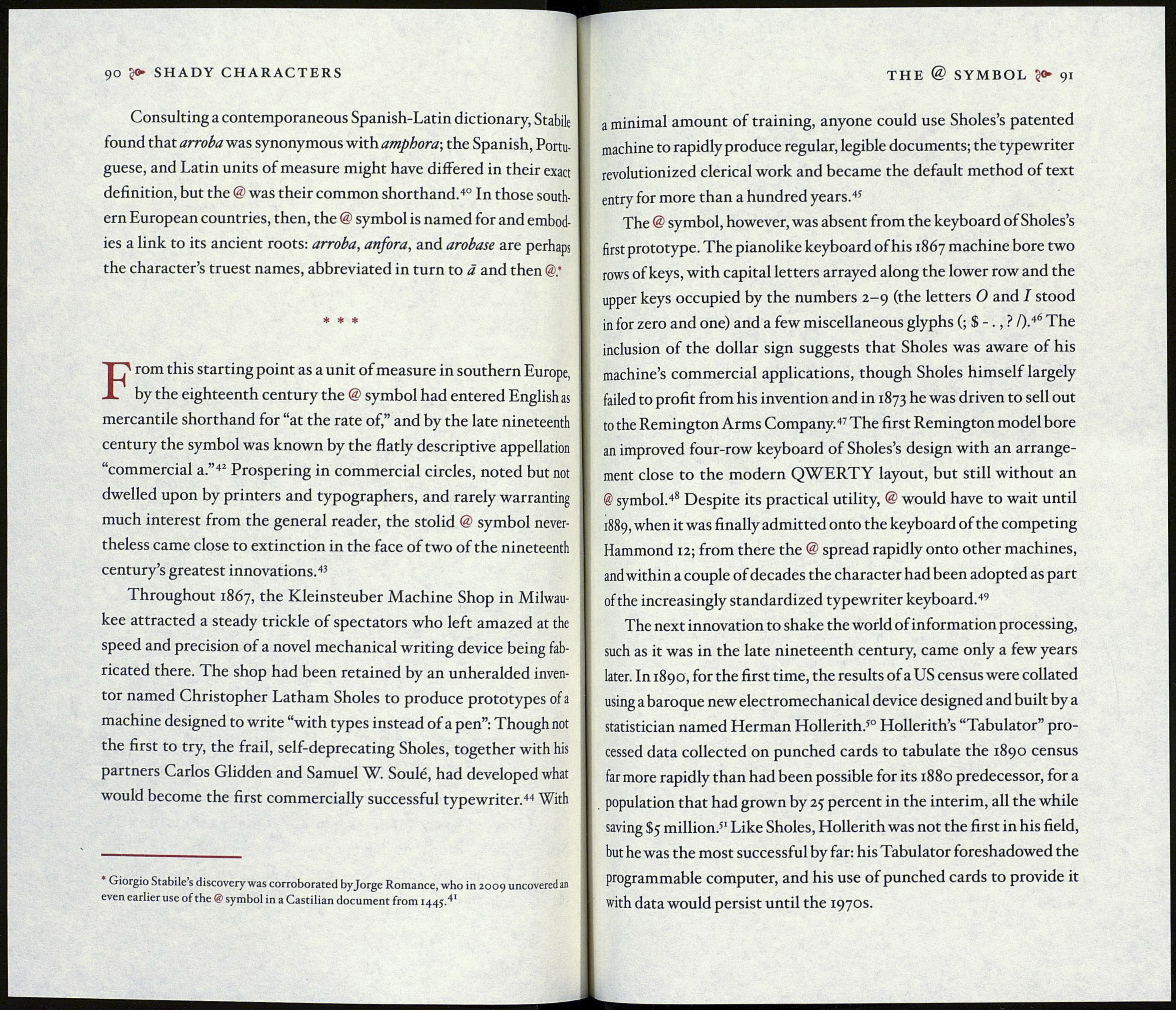 Consulting a contemporaneous Spanish-Latin dictionary, Stabile
found that arroba was synonymous with amphora; the Spanish, Portu¬
guese, and Latin units of measure might have differed in their exact
definition, but the @ was their common shorthand.40 In those south¬
ern European countries, then, the @ symbol is named for and embod¬
ies a link to its ancient roots: arroba, anfora, and arobase are perhaps
the character’s truest names, abbreviated in turn to ä and then @*

From this starting point as a unit of measure in southern Europe,
by the eighteenth century the @ symbol had entered English as
mercantile shorthand for “at the rate of,” and by the late nineteenth
century the symbol was known by the flatly descriptive appellation
“commercial a.”42 Prospering in commercial circles, noted but not
dwelled upon by printers and typographers, and rarely warranting
much interest from the general reader, the stolid @ symbol never¬
theless came close to extinction in the face of two of the nineteenth
century’s greatest innovations.43

Throughout 1867, the Kleinsteuber Machine Shop in Milwau¬
kee attracted a steady trickle of spectators who left amazed at the
speed and precision of a novel mechanical writing device being fab¬
ricated there. The shop had been retained by an unheralded inven¬
tor named Christopher Latham Sholes to produce prototypes of a
machine designed to write “with types instead of a pen”: Though not
the first to try, the frail, self-deprecating Sholes, together with his
partners Carlos Glidden and Samuel W. Soulé, had developed what
would become the first commercially successful typewriter.44 With

Giorgio Stabile’s discovery was corroborated byjorge Romance, who in 2009 uncovered an
even earlier use of the @ symbol in a Castilian document from 1445.41

a minimal amount of training, anyone could use Sholes’s patented
machine to rapidly produce regular, legible documents; the typewriter
revolutionized clerical work and became the default method of text
entry for more than a hundred years.45

The @ symbol, however, was absent from the keyboard of Sholes’s
first prototype. The pianolike keyboard of his 1867 machine bore two
rows of keys, with capital letters arrayed along the lower row and the
upper keys occupied by the numbers 2-9 (the letters О and I stood
in for zero and one) and a few miscellaneous glyphs /).46 The

inclusion of the dollar sign suggests that Sholes was aware of his
machine’s commercial applications, though Sholes himself largely
failed to profit from his invention and in 1873 he was driven to sell out
to the Remington Arms Company.47 The first Remington model bore
an improved four-row keyboard of Sholes’s design with an arrange¬
ment close to the modern QWERTY layout, but still without an
@ symbol.48 Despite its practical utility, @ would have to wait until
1889, when it was finally admitted onto the keyboard of the competing
Hammond 12; from there the @ spread rapidly onto other machines,
and within a couple of decades the character had been adopted as part
of the increasingly standardized typewriter keyboard.49

The next innovation to shake the world of information processing,
such as it was in the late nineteenth century, came only a few years
later. In 1890, for the first time, the results of a US census were collated
using a baroque new electromechanical device designed and built by a
statistician named Herman Hollerith.50 Hollerith’s “Tabulator” pro¬
cessed data collected on punched cards to tabulate the 1890 census
far more rapidly than had been possible for its 1880 predecessor, for a
. population that had grown by 25 percent in the interim, all the while
saving $5 million.51 Like Sholes, Hollerith was not the first in his field,
but he was the most successful by far: his Tabulator foreshadowed the
programmable computer, and his use of punched cards to provide it
with data would persist until the 1970s.