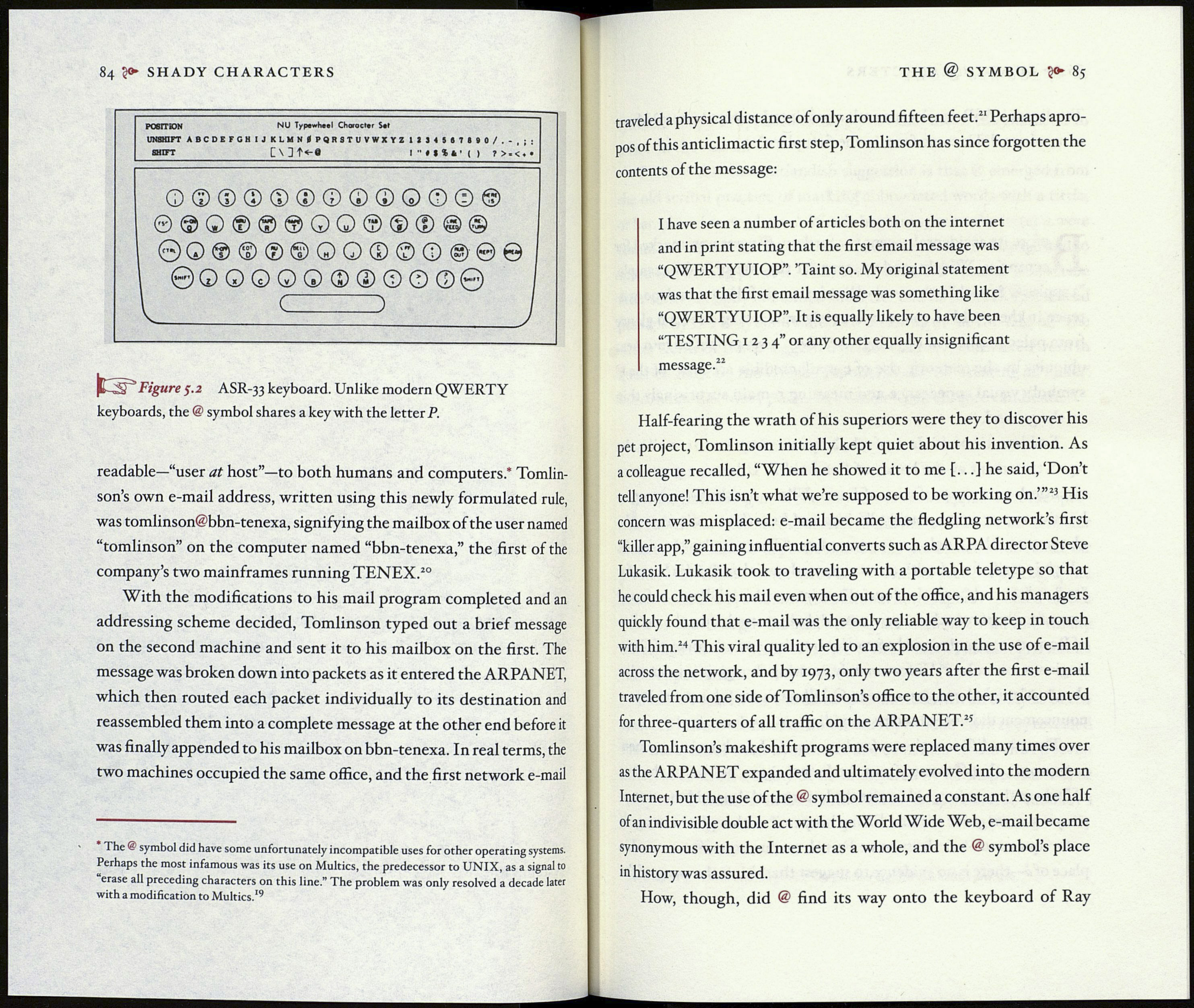 readable—“user at host”—to both humans and computers.* Tomlin¬
son’s own e-mail address, written using this newly formulated rule,
was tomlinson@bbn-tenexa, signifying the mailbox of the user named
“tomlinson” on the computer named “bbn-tenexa,” the first of the
company’s two mainframes running TENEX.20

With the modifications to his mail program completed and an
addressing scheme decided, Tomlinson typed out a brief message
on the second machine and sent it to his mailbox on the first. The
message was broken down into packets as it entered the ARPANET,
which then routed each packet individually to its destination and
reassembled them into a complete message at the other end before it
was finally appended to his mailbox on bbn-tenexa. In real terms, the
two machines occupied the same office, and the first network e-mail

The @ symbol did have some unfortunately incompatible uses for other operating systems.
Perhaps the most infamous was its use on Multics, the predecessor to UNIX, as a signal to
erase all preceding characters on this line.” The problem was only resolved a decade later
with a modification to Multics.'9

traveled a physical distance of only around fifteen feet.2’ Perhaps apro¬
pos of this anticlimactic first step, Tomlinson has since forgotten the
contents of the message:

Half-fearing the wrath of his superiors were they to discover his
pet project, Tomlinson initially kept quiet about his invention. As
a colleague recalled, “When he showed it to me [...] he said, ‘Don’t
tell anyone! This isn’t what we’re supposed to be working on.’”23 His
concern was misplaced: e-mail became the fledgling network’s first
“killer app,” gaining influential converts such as ARPA director Steve
Lukasik. Lukasik took to traveling with a portable teletype so that
he could check his mail even when out of the office, and his managers
quickly found that e-mail was the only reliable way to keep in touch
with him.24 This viral quality led to an explosion in the use of e-mail
across the network, and by 1973, only two years after the first e-mail
traveled from one side of Tomlinson’s office to the other, it accounted
for three-quarters of all traffic on the ARPANET.25

Tomlinson’s makeshift programs were replaced many times over
as the ARPANET expanded and ultimately evolved into the modern
Internet, but the use of the @ symbol remained a constant. As one half
of an indivisible double act with the World Wide Web, e-mail became
synonymous with the Internet as a whole, and the @ symbol’s place
in history was assured.

How, though, did @ find its way onto the keyboard of Ray