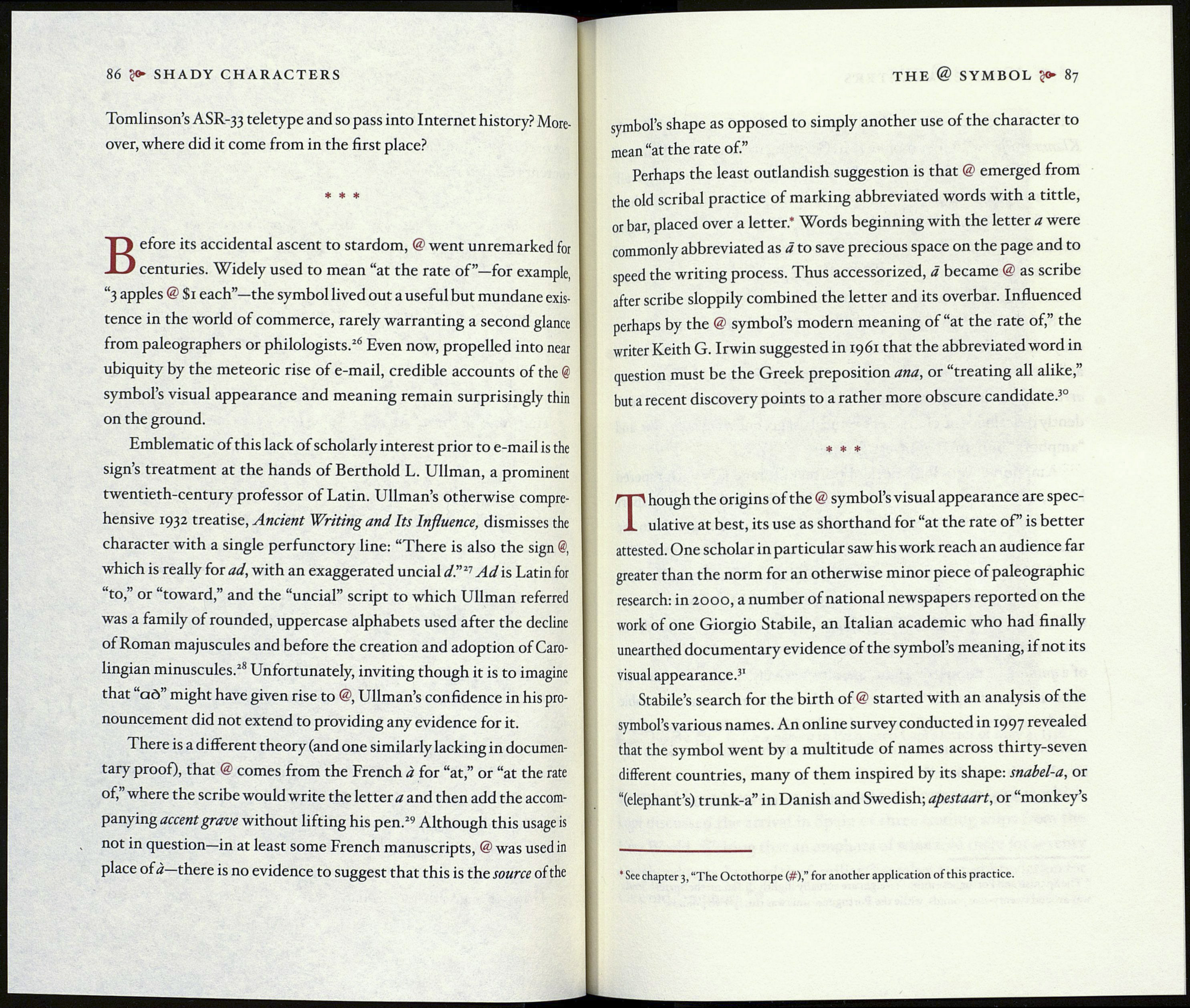 Tomlinson’s ASR-33 teletype and so pass into Internet history? More¬
over, where did it come from in the first place?

Before its accidental ascent to stardom, @ went unremarked for
centuries. Widely used to mean “at the rate of”—for example,
“3 apples @ $1 each”—the symbol lived out a useful but mundane exis¬
tence in the world of commerce, rarely warranting a second glance
from paleographers or philologists.26 Even now, propelled into near
ubiquity by the meteoric rise of e-mail, credible accounts of the @
symbol’s visual appearance and meaning remain surprisingly thin
on the ground.

Emblematic of this lack of scholarly interest prior to e-mail is the
sign’s treatment at the hands of Berthold L. Ullman, a prominent
twentieth-century professor of Latin. Ullman’s otherwise compre¬
hensive 1932 treatise, Ancient Writing and Its Influence, dismisses the
character with a single perfunctory line: “There is also the sign @,
which is really for ad, with an exaggerated uncial d.”2’’ Ad is Latin for
“to,” or “toward,” and the “uncial” script to which Ullman referred
was a family of rounded, uppercase alphabets used after the decline
of Roman majuscules and before the creation and adoption of Caro-
lingian minuscules.28 Unfortunately, inviting though it is to imagine
that aò” might have given rise to @, Ullman’s confidence in his pro¬
nouncement did not extend to providing any evidence for it.

There is a different theory (and one similarly lacking in documen¬
tary proof), that @ comes from the French à for “at,” or “at the rate
of, where the scribe would write the letter a and then add the accom¬
panying accent grave without lifting his pen.29 Although this usage is
not in question—in at least some French manuscripts, @ was used in
place of à there is no evidence to suggest that this is the source of the

symbol’s shape as opposed to simply another use of the character to
mean “at the rate of.”

Perhaps the least outlandish suggestion is that @ emerged from
the old scribal practice of marking abbreviated words with a tittle,
or bar, placed over a letter.* Words beginning with the letter a were
commonly abbreviated as ä to save precious space on the page and to
speed the writing process. Thus accessorized, ä became @ as scribe
after scribe sloppily combined the letter and its overbar. Influenced
perhaps by the @ symbol’s modern meaning of “at the rate of,” the
writer Keith G. Irwin suggested in 1961 that the abbreviated word in
question must be the Greek preposition ana, or “treating all alike,”
but a recent discovery points to a rather more obscure candidate.30

Though the origins of the @ symbol’s visual appearance are spec¬
ulative at best, its use as shorthand for “at the rate of’ is better
attested. One scholar in particular saw his work reach an audience far
greater than the norm for an otherwise minor piece of paleographic
research: in 2000, a number of national newspapers reported on the
work of one Giorgio Stabile, an Italian academic who had finally
unearthed documentary evidence of the symbol’s meaning, if not its
visual appearance.31

Stabile’s search for the birth of @ started with an analysis of the
symbol’s various names. An online survey conducted in 1997 revealed
that the symbol went by a multitude of names across thirty-seven
different countries, many of them inspired by its shape: snabel-a, or
“(elephant’s) trunk-а” in Danish and Swedish; apestaart, or “monkey’s

* See chapter 3, “The Octothorpe (#),” for another application of this practice.