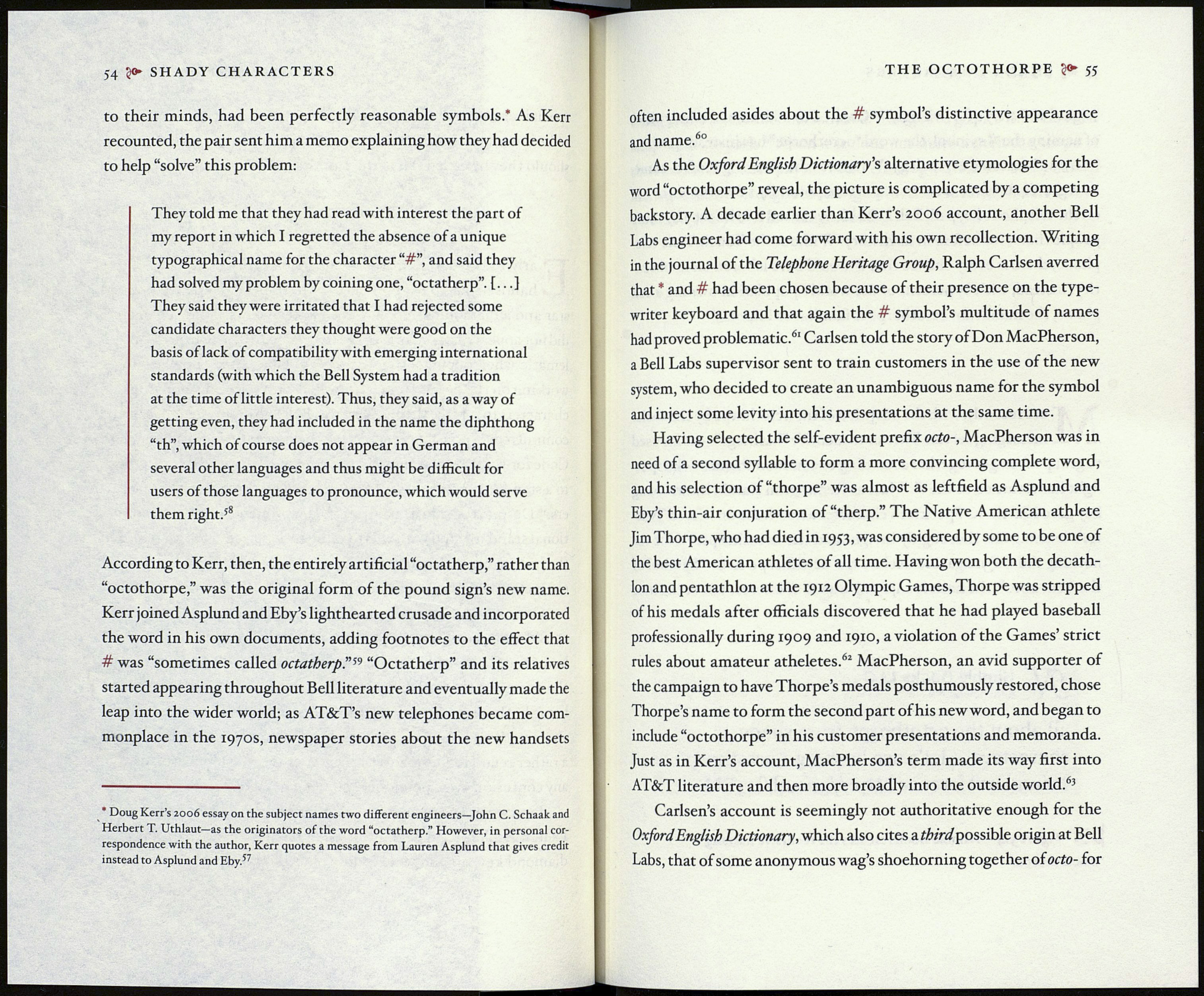 to their minds, had been perfectly reasonable symbols.* As Kerr
recounted, the pair sent him a memo explaining how they had decided
to help “solve” this problem:

They told me that they had read with interest the part of
my report in which I regretted the absence of a unique
typographical name for the character “#”, and said they
had solved my problem by coining one, “octatherp”. [...}

They said they were irritated that I had rejected some
candidate characters they thought were good on the
basis of lack of compatibility with emerging international
standards (with which the Bell System had a tradition
at the time of little interest). Thus, they said, as a way of
getting even, they had included in the name the diphthong
“th”, which of course does not appear in German and
several other languages and thus might be difficult for
users of those languages to pronounce, which would serve
them right.s8

According to Kerr, then, the entirely artificial “octatherp,” rather than
“octothorpe,” was the original form of the pound sign’s new name.
Kerr joined Asplund and Eby’s lighthearted crusade and incorporated
the word in his own documents, adding footnotes to the effect that
# was “sometimes called octatherp.”59 “Octatherp” and its relatives
started appearing throughout Bell literature and eventually made the
leap into the wider world; as AT&T’s new telephones became com¬
monplace in the 1970S, newspaper stories about the new handsets

* Doug Kerr’s 2006 essay on the subject names two different engineers—John C. Schaak and
Herbert T. Uthlaut—as the originators of the word “octatherp.” However, in personal cor¬
respondence with the author, Kerr quotes a message from Lauren Asplund that gives credit
instead to Asplund and EbyJ^

often included asides about the # symbol’s distinctive appearance
and name.60

As the Oxford English Dictionary's alternative etymologies for the
word “octothorpe” reveal, the picture is complicated by a competing
backstory. A decade earlier than Kerr’s 2006 account, another Bell
Labs engineer had come forward with his own recollection. Writing
in the journal of the Telephone Heritage Group, Ralph Carlsen averred
that * and # had been chosen because of their presence on the type¬
writer keyboard and that again the # symbol’s multitude of names
had proved problematic.6' Carlsen told the story of Don MacPherson,
a Bell Labs supervisor sent to train customers in the use of the new
system, who decided to create an unambiguous name for the symbol
and inject some levity into his presentations at the same time.

Having selected the self-evident prefix octo-, MacPherson was in
need of a second syllable to form a more convincing complete word,
and his selection of “thorpe” was almost as leftfield as Asplund and
Eby’s thin-air conjuration of “therp.” The Native American athlete
Jim Thorpe, who had died in 1953, was considered by some to be one of
the best American athletes of all time. Having won both the decath¬
lon and pentathlon at the 1912 Olympic Games, Thorpe was stripped
of his medals after officiais discovered that he had played baseball
professionally during 1909 and 1910, a violation of the Games’ strict
rules about amateur atheletes.62 MacPherson, an avid supporter of
the campaign to have Thorpe’s medals posthumously restored, chose
Thorpe’s name to form the second part of his new word, and began to
include “octothorpe” in his customer presentations and memoranda.
Just as in Kerr’s account, MacPherson’s term made its way first into
AT&T literature and then more broadly into the outside world.63

Carlsen’s account is seemingly not authoritative enough for the
Oxford English Dictionary, which also cites a third possible origin at Bell
Labs, that of some anonymous wag’s shoehorning together of octo- for