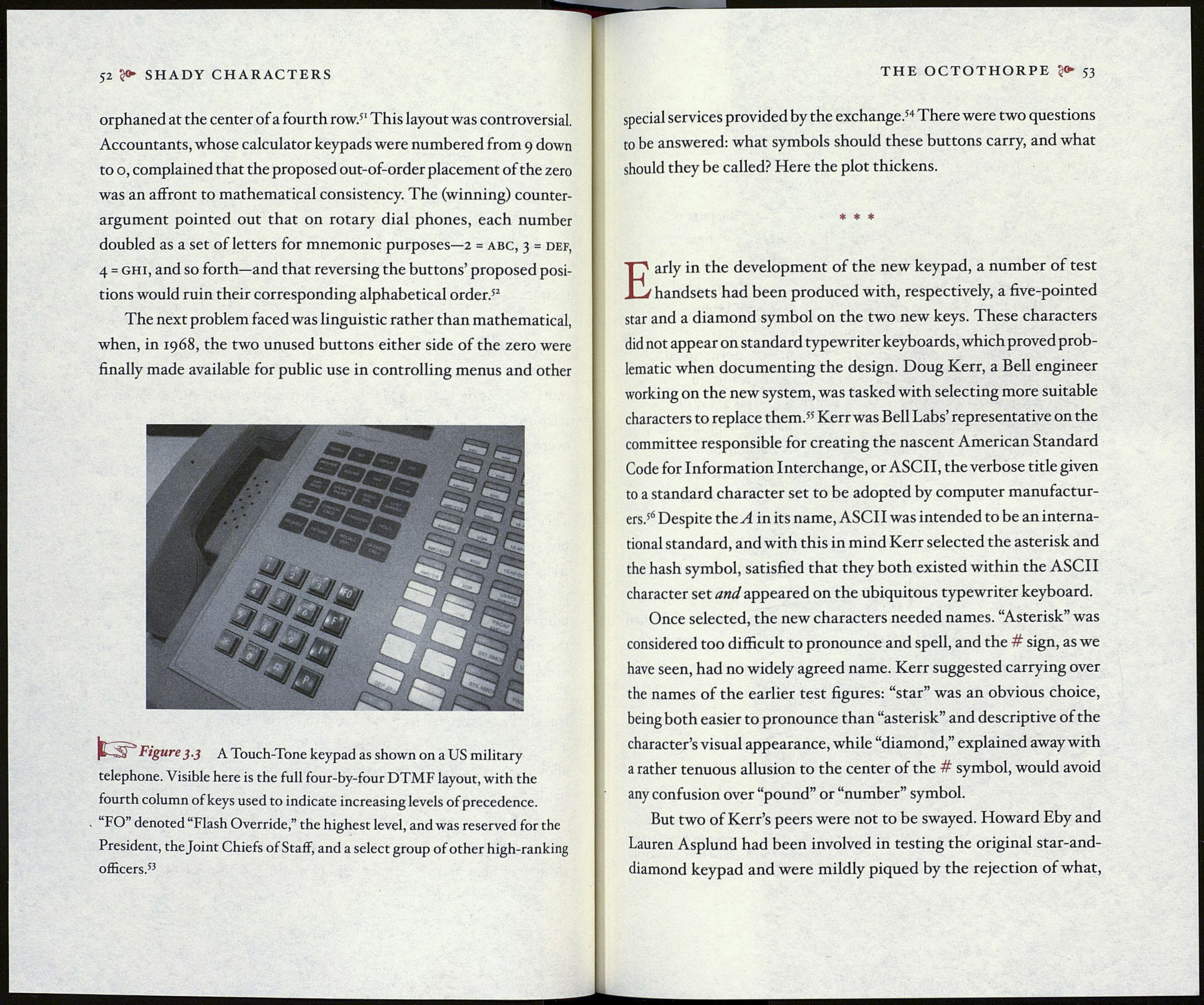 orphaned at the center of a fourth row.51 This layout was controversial.
Accountants, whose calculator keypads were numbered from 9 down
to o, complained that the proposed out-of-order placement of the zero
was an affront to mathematical consistency. The (winning) counter¬
argument pointed out that on rotary dial phones, each number
doubled as a set of letters for mnemonic purposes—2 = abc, 3 = def,
4 = GHi, and so forth—and that reversing the buttons’ proposed posi¬
tions would ruin their corresponding alphabetical order.52

The next problem faced was linguistic rather than mathematical,
when, in 1968, the two unused buttons either side of the zero were
finally made available for public use in controlling menus and other

fUST” Figure 3.3 A Touch-Tone keypad as shown on a US military
telephone. Visible here is the full four-by-four DTMF layout, with the
fourth column of keys used to indicate increasing levels of precedence.
“FO” denoted “Flash Override,” the highest level, and was reserved for the
President, the Joint Chiefs of Staff, and a select group of other high-ranking
officers.53

special services provided by the exchange.54 There were two questions
to be answered: what symbols should these buttons carry, and what
should they be called? Here the plot thickens.

Early in the development of the new keypad, a number of test
handsets had been produced with, respectively, a five-pointed
star and a diamond symbol on the two new keys. These characters
did not appear on standard typewriter keyboards, which proved prob¬
lematic when documenting the design. Doug Kerr, a Bell engineer
working on the new system, was tasked with selecting more suitable
characters to replace them.55 Kerr was Bell Labs’ representative on the
committee responsible for creating the nascent American Standard
Code for Information Interchange, or ASCII, the verbose title given
to a standard character set to be adopted by computer manufactur¬
ers.56 Despite the A in its name, ASCII was intended to be an interna¬
tional standard, and with this in mind Kerr selected the asterisk and
the hash symbol, satisfied that they both existed within the ASCII
character set and appeared on the ubiquitous typewriter keyboard.

Once selected, the new characters needed names. “Asterisk” was
considered too difficult to pronounce and spell, and the # sign, as we
have seen, had no widely agreed name. Kerr suggested carrying over
the names of the earlier test figures: “star” was an obvious choice,
being both easier to pronounce than “asterisk” and descriptive of the
character’s visual appearance, while “diamond,” explained away with
a rather tenuous allusion to the center of the # symbol, would avoid
any confusion over “pound” or “number” symbol.

But two of Kerr’s peers were not to be swayed. Howard Eby and
Lauren Asplund had been involved in testing the original star-and-
diamond keypad and were mildly piqued by the rejection of what,