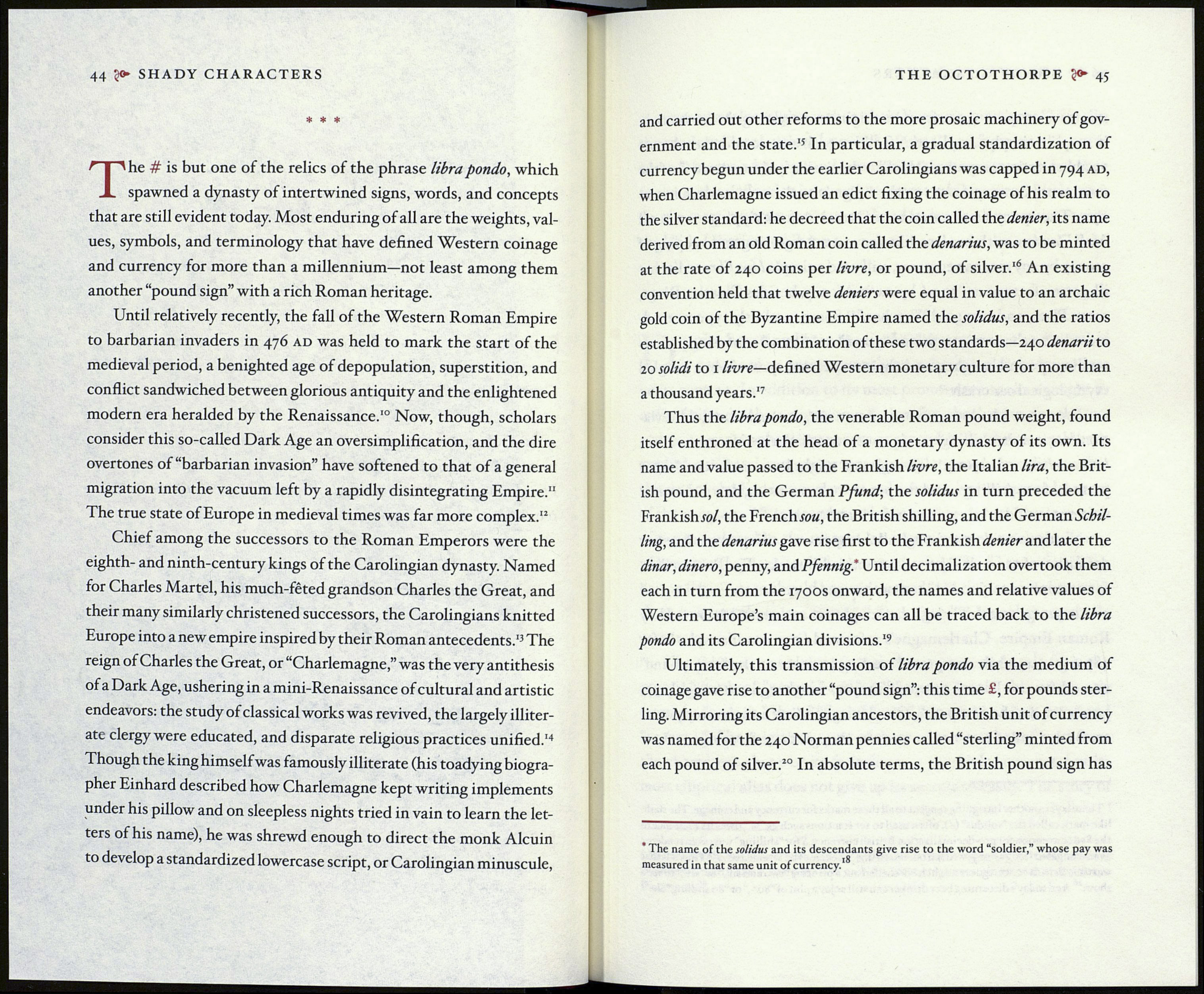 The # is but one of the relics of the phrase libra pondo, which
spawned a dynasty of intertwined signs, words, and concepts
that are still evident today. Most enduring of all are the weights, val¬
ues, symbols, and terminology that have defined Western coinage
and currency for more than a millennium—not least among them
another “pound sign” with a rich Roman heritage.

Until relatively recently, the fall of the Western Roman Empire
to barbarian invaders in 476 ad was held to mark the start of the
medieval period, a benighted age of depopulation, superstition, and
conflict sandwiched between glorious antiquity and the enlightened
modern era heralded by the Renaissance.10 Now, though, scholars
consider this so-called Dark Age an oversimplification, and the dire
overtones of “barbarian invasion” have softened to that of a general
migration into the vacuum left by a rapidly disintegrating Empire.11
The true state of Europe in medieval times was far more complex.12

Chief among the successors to the Roman Emperors were the
eighth- and ninth-century kings of the Carolingian dynasty. Named
for Charles Martel, his much-fêted grandson Charles the Great, and
their many similarly christened successors, the Carolingians knitted
Europe into a new empire inspired by their Roman antecedents.'3 The
reign of Charles the Great, or “Charlemagne,” was the very antithesis
of a Dark Age, ushering in a mini-Renaissance of cultural and artistic
endeavors: the study of classical works was revived, the largely illiter¬
ate clergy were educated, and disparate religious practices unified.'4
Though the king himself was famously illiterate (his toadying biogra¬
pher Einhard described how Charlemagne kept writing implements
under his pillow and on sleepless nights tried in vain to learn the let¬
ters of his name), he was shrewd enough to direct the monk Alcuin
to develop a standardized lowercase script, or Carolingian minuscule,

and carried out other reforms to the more prosaic machinery of gov¬
ernment and the state.'5 In particular, a gradual standardization of
currency begun under the earlier Carolingians was capped in 794 ad,
when Charlemagne issued an edict fixing the coinage of his realm to
the silver standard: he decreed that the coin called the denier, its name
derived from an old Roman coin called the denarius, was to be minted
at the rate of 240 coins per livre, or pound, of silver.'6 An existing
convention held that twelve deniers were equal in value to an archaic
gold coin of the Byzantine Empire named the solidus, and the ratios
established by the combination of these two standards—240 denarii to
20 solidi to i livre—defined Western monetary culture for more than
a thousand years.'7

Thus the libra pondo, the venerable Roman pound weight, found
itself enthroned at the head of a monetary dynasty of its own. Its
name and value passed to the Frankish livre, the Italian lira, the Brit¬
ish pound, and the German Pfund-, the solidus in turn preceded the
Frankish sol, the French to«, the British shilling, and the German Schil¬
ling, and the denarius gave rise first to the Frankish denier and later the
dinar, dinero, penny, and Pfennig.* Until decimalization overtook them
each in turn from the 1700s onward, the names and relative values of
Western Europe’s main coinages can all be traced back to the libra
pondo and its Carolingian divisions.'9

Ultimately, this transmission of libra pondo via the medium of
coinage gave rise to another “pound sign”: this time £, for pounds ster¬
ling. Mirroring its Carolingian ancestors, the British unit of currency
was named for the 240 Norman pennies called “sterling” minted from
each pound of silver.20 In absolute terms, the British pound sign has

* The name of the solidus and its descendants give rise to the word “soldier,” whose pay was
measured in that same unit of currency.18