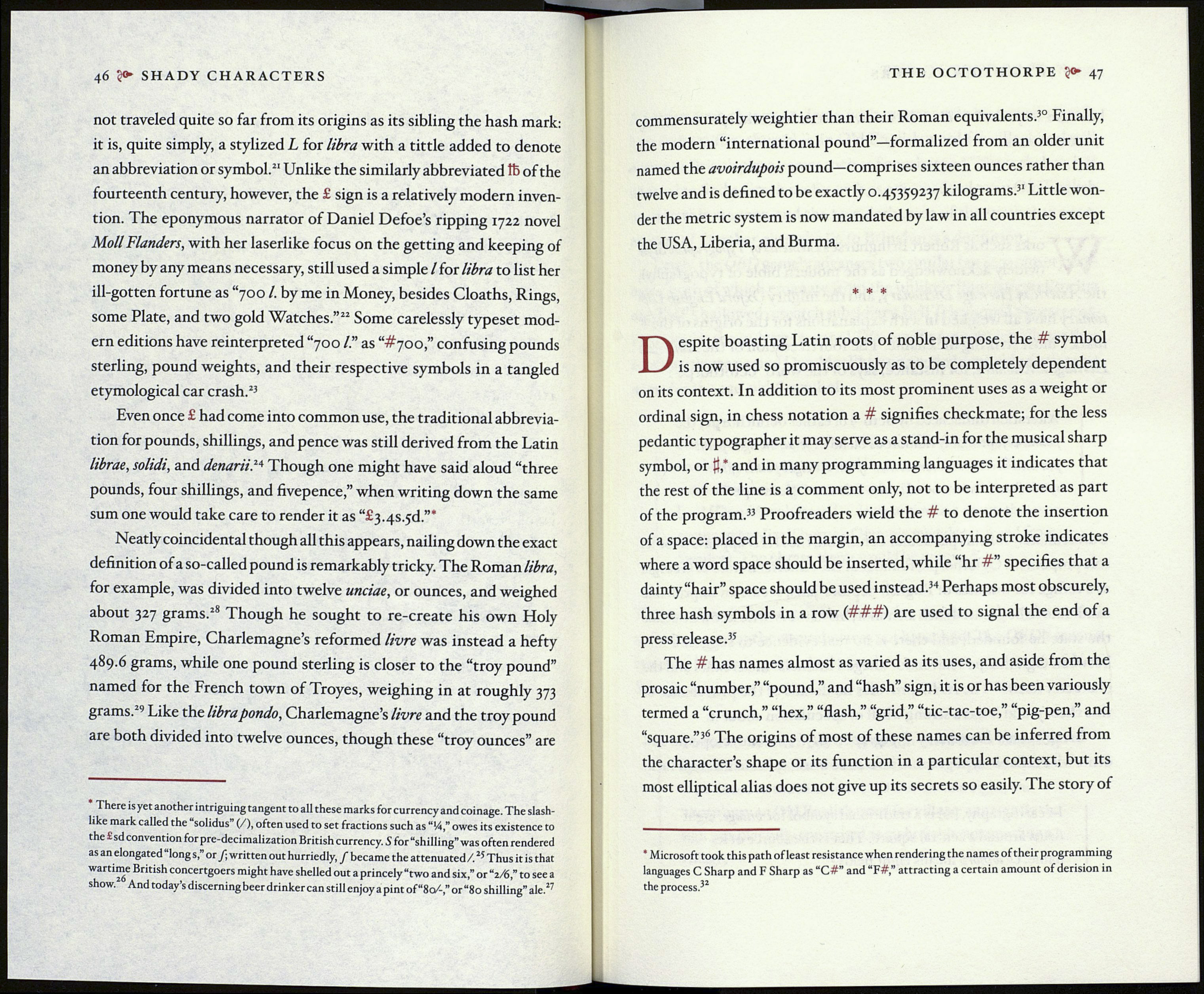 not traveled quite so far from its origins as its sibling the hash mark:
it is, quite simply, a stylized L for libra with a tittle added to denote
an abbreviation or symbol.21 Unlike the similarly abbreviated tb of the
fourteenth century, however, the £ sign is a relatively modern inven¬
tion. The eponymous narrator of Daniel Defoe’s ripping 1722 novel
Moll Flanders, with her laserlike focus on the getting and keeping of
money by any means necessary, still used a simple / for libra to list her
ill-gotten fortune as “700 /. by me in Money, besides Cloaths, Rings,
some Plate, and two gold Watches.”22 Some carelessly typeset mod¬
ern editions have reinterpreted “700 /.” as “#700,” confusing pounds
sterling, pound weights, and their respective symbols in a tangled
etymological car crash.23

Even once £ had come into common use, the traditional abbrevia¬
tion for pounds, shillings, and pence was still derived from the Latin
librae, solidi, and denarii,24 Though one might have said aloud “three
pounds, four shillings, and fivepence,” when writing down the same
sum one would take care to render it as “f3.4s.5d.”*

Neatly coincidental though all this appears, nailing down the exact
definition of a so-called pound is remarkably tricky. The Roman libra,
for example, was divided into twelve unciae, or ounces, and weighed
about 327 grams.28 Though he sought to re-create his own Holy
Roman Empire, Charlemagne’s reformed livre was instead a hefty
489.6 grams, while one pound sterling is closer to the “troy pound”
named for the French town of Troyes, weighing in at roughly 373
grams.29 Like the libra pondo, Charlemagne’s livre and the troy pound
are both divided into twelve ounces, though these “troy ounces” are

There is yet another intriguing tangent to all these marks for currency and coinage. The slash¬
like mark called the “solidus” (/), often used to set fractions such as “!4,” owes its existence to
the £ sd convention for pre-decimalization British currency. 5 for “shilling” was often rendered
as an elongated “long s,” or /; written out hurriedly, / became the attenuated /.25 Thus it is that
wartime British concertgoers might have shelled out a princely “two and six,” or “2/6,” to see a
show. And today’s discerning beer drinker can still enjoy a pint of “8c/-,” or “80 shilling” ale.27

commensurately weightier than their Roman equivalents.30 Finally,
the modern “international pound”—formalized from an older unit
named the avoirdupois pound—comprises sixteen ounces rather than
twelve and is defined to be exactly 0.45359237 kilograms.3' Little won¬
der the metric system is now mandated by law in all countries except
the USA, Liberia, and Burma.

Despite boasting Latin roots of noble purpose, the # symbol
is now used so promiscuously as to be completely dependent
on its context. In addition to its most prominent uses as a weight or
ordinal sign, in chess notation a # signifies checkmate; for the less
pedantic typographer it may serve as a stand-in for the musical sharp
symbol, or j},* and in many programming languages it indicates that
the rest of the line is a comment only, not to be interpreted as part
of the program.33 Proofreaders wield the # to denote the insertion
of a space: placed in the margin, an accompanying stroke indicates
where a word space should be inserted, while “hr #” specifies that a
dainty “hair” space should be used instead.34 Perhaps most obscurely,
three hash symbols in a row (###) are used to signal the end of a
press release.33

The # has names almost as varied as its uses, and aside from the
prosaic “number,” “pound,” and “hash” sign, it is or has been variously
termed a “crunch,” “hex,” “flash,” “grid,” “tic-tac-toe,” “pig-pen,” and
“square.”36 The origins of most of these names can be inferred from
the character’s shape or its function in a particular context, but its
most elliptical alias does not give up its secrets so easily. The story of

* Microsoft took this path of least resistance when rendering the names of their programming
languages С Sharp and F Sharp as “C#” and “F#attracting a certain amount of derision in
the process.32