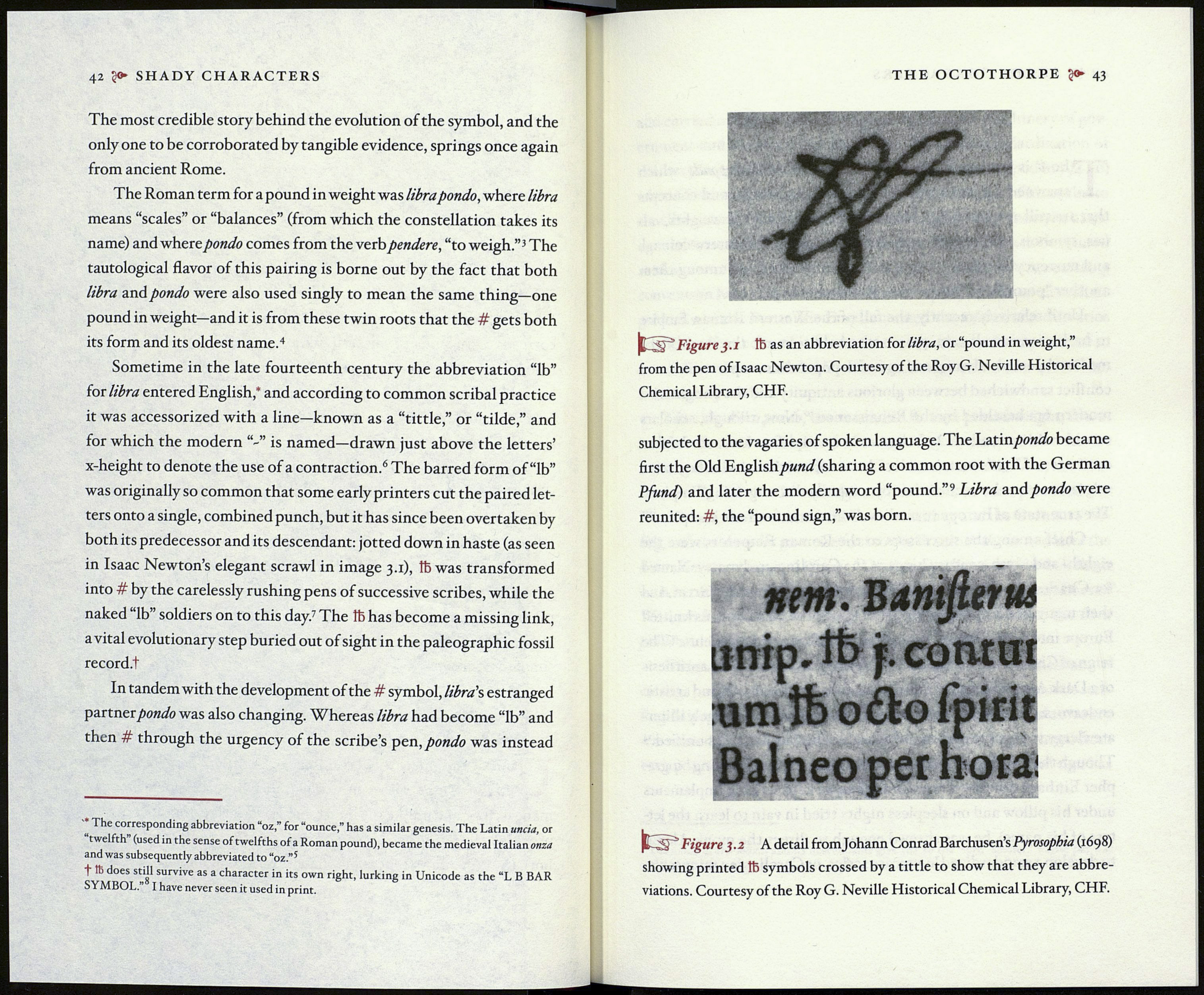 The most credible story behind the evolution of the symbol, and the
only one to be corroborated by tangible evidence, springs once again
from ancient Rome.

The Roman term for a pound in weight was libra pondo, where libra
means “scales” or “balances” (from which the constellation takes its
name) and where pondo comes from the verb pendere, “to weigh.”3 The
tautological flavor of this pairing is borne out by the fact that both
libra and pondo were also used singly to mean the same thing—one
pound in weight—and it is from these twin roots that the # gets both
its form and its oldest name.4

Sometime in the late fourteenth century the abbreviation “lb”
for libra entered English,* and according to common scribal practice
it was accessorized with a line—known as a “tittle,” or “tilde,” and
for which the modern is named—drawn just above the letters’
x-height to denote the use of a contraction.6 The barred form of “lb”
was originally so common that some early printers cut the paired let¬
ters onto a single, combined punch, but it has since been overtaken by
both its predecessor and its descendant: jotted down in haste (as seen
in Isaac Newton’s elegant scrawl in image 3.1), lb was transformed
into # by the carelessly rushing pens of successive scribes, while the
naked ‘lb” soldiers on to this day.7 The lb has become a missing link,
a vital evolutionary step buried out of sight in the paleographic fossil
record.t

In tandem with the development of the # symbol, libra’s estranged
partner pondo was also changing. Whereas libra had become “lb” and
then # through the urgency of the scribe’s pen, pondo was instead

* The corresponding abbreviation “oz,” for “ounce,” has a similar genesis. The Latin uncia, or
twelfth (used in the sense of twelfths of a Roman pound), became the medieval Italian onza
and was subsequently abbreviated to “oz

t tb does still survive as a character in its own right, lurking in Unicode as the “L В BAR
SYMBOL.” I have never seen it used in print.

Figure 3.1 lb as an abbreviation for libra, or “pound in weight,”
from the pen of Isaac Newton. Courtesy of the Roy G. Neville Historical
Chemical Library, CHF.

subjected to the vagaries of spoken language. The Latin pondo became
first the Old Englishpund (sharing a common root with the German
Pfund) and later the modern word “pound.”9 Libra and pondo were
reunited: #, the “pound sign,” was born.