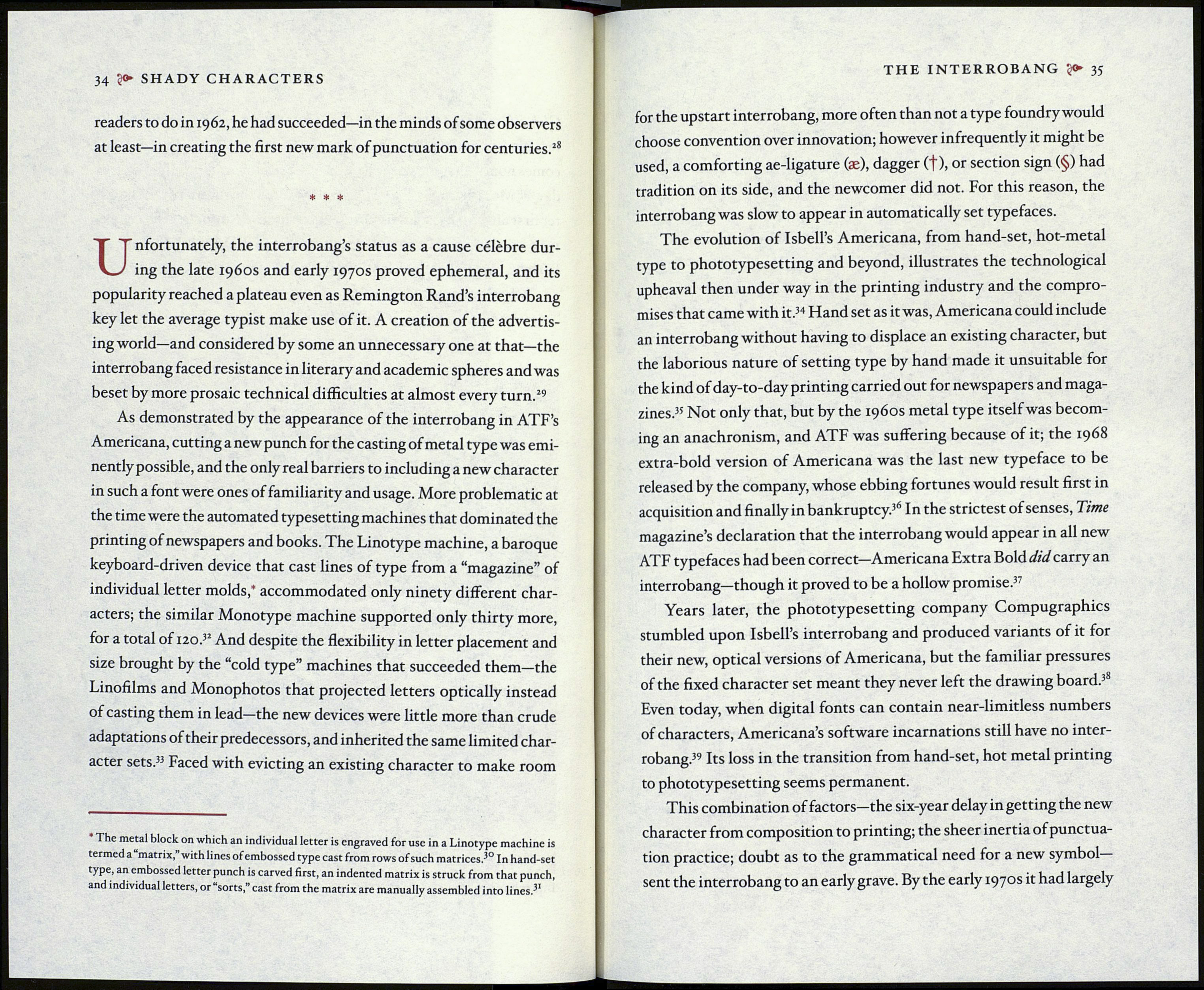 readers to do in 1962, he had succeeded—in the minds of some observers
at least—in creating the first new mark of punctuation for centuries.28

Unfortunately, the interrobang’s status as a cause célèbre dur¬
ing the late 1960s and early 1970s proved ephemeral, and its
popularity reached a plateau even as Remington Rand’s interrobang
key let the average typist make use of it. A creation of the advertis¬
ing world—and considered by some an unnecessary one at that—the
interrobang faced resistance in literary and academic spheres and was
beset by more prosaic technical difficulties at almost every turn.29

As demonstrated by the appearance of the interrobang in ATF’s
Americana, cutting a new punch for the casting of metal type was emi¬
nently possible, and the only real barriers to including a new character
in such a font were ones of familiarity and usage. More problematic at
the time were the automated typesetting machines that dominated the
printing of newspapers and books. The Linotype machine, a baroque
keyboard-driven device that cast lines of type from a “magazine” of
individual letter molds,* accommodated only ninety different char¬
acters; the similar Monotype machine supported only thirty more,
for a total of 120.32 And despite the flexibility in letter placement and
size brought by the “cold type” machines that succeeded them—the
Linofilms and Monophotos that projected letters optically instead
of casting them in lead—the new devices were little more than crude
adaptations of their predecessors, and inherited the same limited char¬
acter sets.33 Faced with evicting an existing character to make room

The metal block on which an individual letter is engraved for use in a Linotype machine is
termed a matrix, with lines of embossed type cast from rows of such matrices.30 In hand-set
type, an embossed letter punch is carved first, an indented matrix is struck from that punch,
and individual letters, or “sorts,” cast from the matrix are manually assembled into lines.3'

for the upstart interrobang, more often than not a type foundry would
choose convention over innovation; however infrequently it might be
used, a comforting ae-ligature (æ), dagger (f ), or section sign (§) had
tradition on its side, and the newcomer did not. For this reason, the
interrobang was slow to appear in automatically set typefaces.

The evolution of Isbell’s Americana, from hand-set, hot-metal
type to phototypesetting and beyond, illustrates the technological
upheaval then under way in the printing industry and the compro¬
mises that came with it.34 Hand set as it was, Americana could include
an interrobang without having to displace an existing character, but
the laborious nature of setting type by hand made it unsuitable for
the kind of day-to-day printing carried out for newspapers and maga¬
zines.35 Not only that, but by the 1960s metal type itself was becom¬
ing an anachronism, and ATF was suffering because of it; the 1968
extra-bold version of Americana was the last new typeface to be
released by the company, whose ebbing fortunes would result first in
acquisition and finally in bankruptcy.36 In the strictest of senses, Time
magazine’s declaration that the interrobang would appear in all new
ATF typefaces had been correct—Americana Extra Bold did carry an
interrobang—though it proved to be a hollow promise.37

Years later, the phototypesetting company Compugraphics
stumbled upon Isbell’s interrobang and produced variants of it for
their new, optical versions of Americana, but the familiar pressures
of the fixed character set meant they never left the drawing board.3*
Even today, when digital fonts can contain near-limitless numbers
of characters, Americana’s software incarnations still have no inter¬
robang.39 Its loss in the transition from hand-set, hot metal printing
to phototypesetting seems permanent.

This combination of factors—the six-year delay in getting the new
character from composition to printing; the sheer inertia of punctua¬
tion practice; doubt as to the grammatical need for a new symbol-
sent the interrobang to an early grave. By the early 1970s it had largely