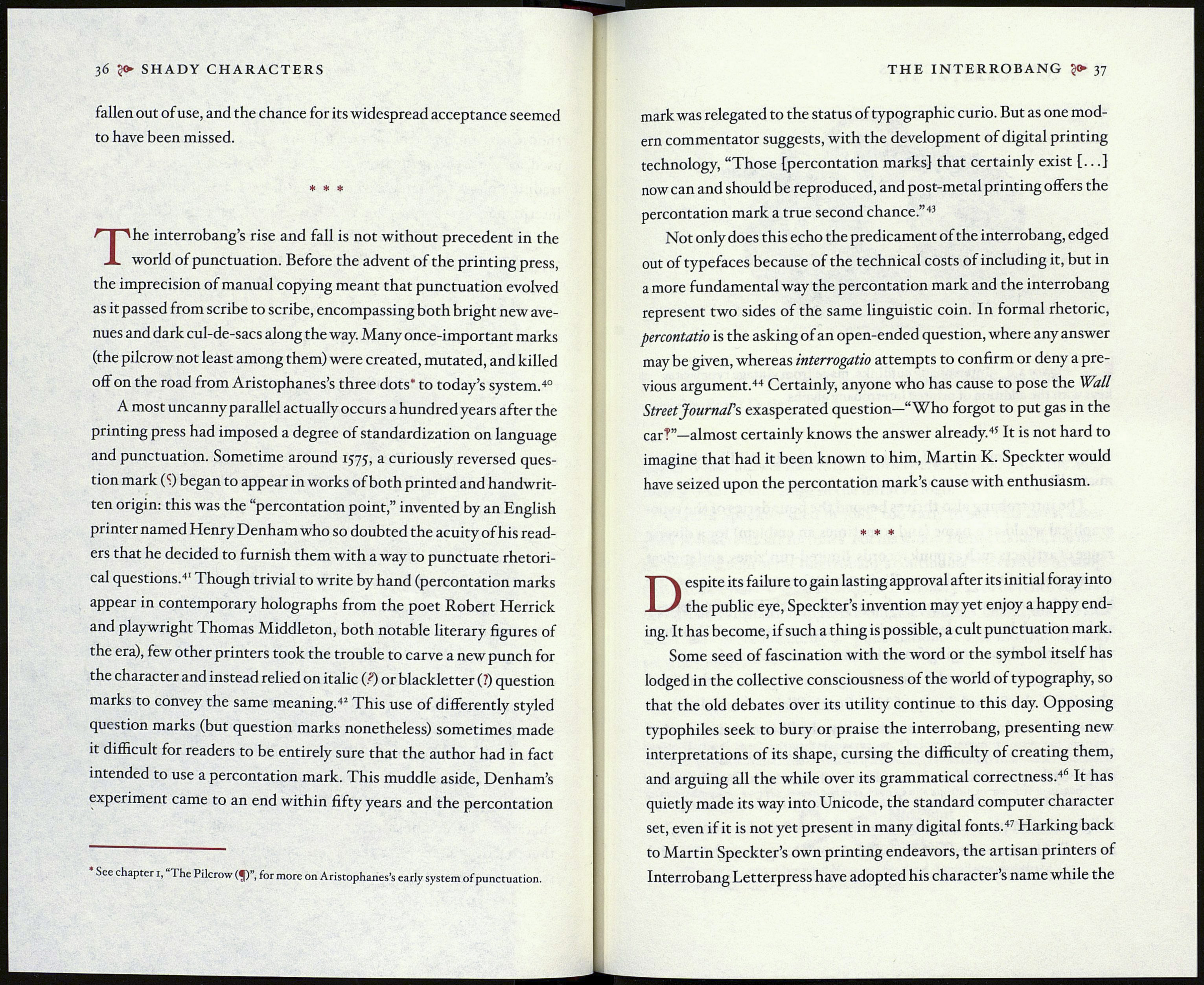 fallen out of use, and the chance for its widespread acceptance seemed
to have been missed.

The interrobang’s rise and fall is not without precedent in the
world of punctuation. Before the advent of the printing press,
the imprecision of manual copying meant that punctuation evolved
as it passed from scribe to scribe, encompassing both bright new ave¬
nues and dark cul-de-sacs along the way. Many once-important marks
(the pilcrow not least among them) were created, mutated, and killed
off on the road from Aristophanes’s three dots* to today’s system.40

A most uncanny parallel actually occurs a hundred years after the
printing press had imposed a degree of standardization on language
and punctuation. Sometime around 1575, a curiously reversed ques¬
tion mark (1) began to appear in works of both printed and handwrit¬
ten origin: this was the “percontation point,” invented by an English
printer named Henry Denham who so doubted the acuity of his read¬
ers that he decided to furnish them with a way to punctuate rhetori¬
cal questions.41 Though trivial to write by hand (percontation marks
appear in contemporary holographs from the poet Robert Herrick
and playwright Thomas Middleton, both notable literary figures of
the era), few other printers took the trouble to carve a new punch for
the character and instead relied on italic (f) or blackletter (?) question
marks to convey the same meaning.42 This use of differently styled
question marks (but question marks nonetheless) sometimes made
it difficult for readers to be entirely sure that the author had in fact
intended to use a percontation mark. This muddle aside, Denham’s
experiment came to an end within fifty years and the percontation

* See chapter i, “The Pilcrow (f)”, for more on Aristophanes’s early system of punctuation.

mark was relegated to the status of typographic curio. But as one mod¬
ern commentator suggests, with the development of digital printing
technology, “Those [percontation marks] that certainly exist {...]
now can and should be reproduced, and post-metal printing offers the
percontation mark a true second chance.”43

Not only does this echo the predicament of the interrobang, edged
out of typefaces because of the technical costs of including it, but in
a more fundamental way the percontation mark and the interrobang
represent two sides of the same linguistic coin. In formal rhetoric,
percontatio is the asking of an open-ended question, where any answer
maybe given, whereas interrogano attempts to confirm or deny a pre¬
vious argument.44 Certainly, anyone who has cause to pose the Wall
Street Journal’s exasperated question—“Who forgot to put gas in the
car?”—almost certainly knows the answer already.45 It is not hard to
imagine that had it been known to him, Martin K. Speckter would
have seized upon the percontation mark’s cause with enthusiasm.

Despite its failure to gain lasting approval after its initial foray into
the public eye, Speckter’s invention may yet enjoy a happy end¬
ing. It has become, if such a thing is possible, a cult punctuation mark.

Some seed of fascination with the word or the symbol itself has
lodged in the collective consciousness of the world of typography, so
that the old debates over its utility continue to this day. Opposing
typophiles seek to bury or praise the interrobang, presenting new
interpretations of its shape, cursing the difficulty of creating them,
and arguing all the while over its grammatical correctness.46 It has
quietly made its way into Unicode, the standard computer character
set, even if it is not yet present in many digital fonts.47 Harking back
to Martin Speckter’s own printing endeavors, the artisan printers of
Interrobang Letterpress have adopted his character’s name while the