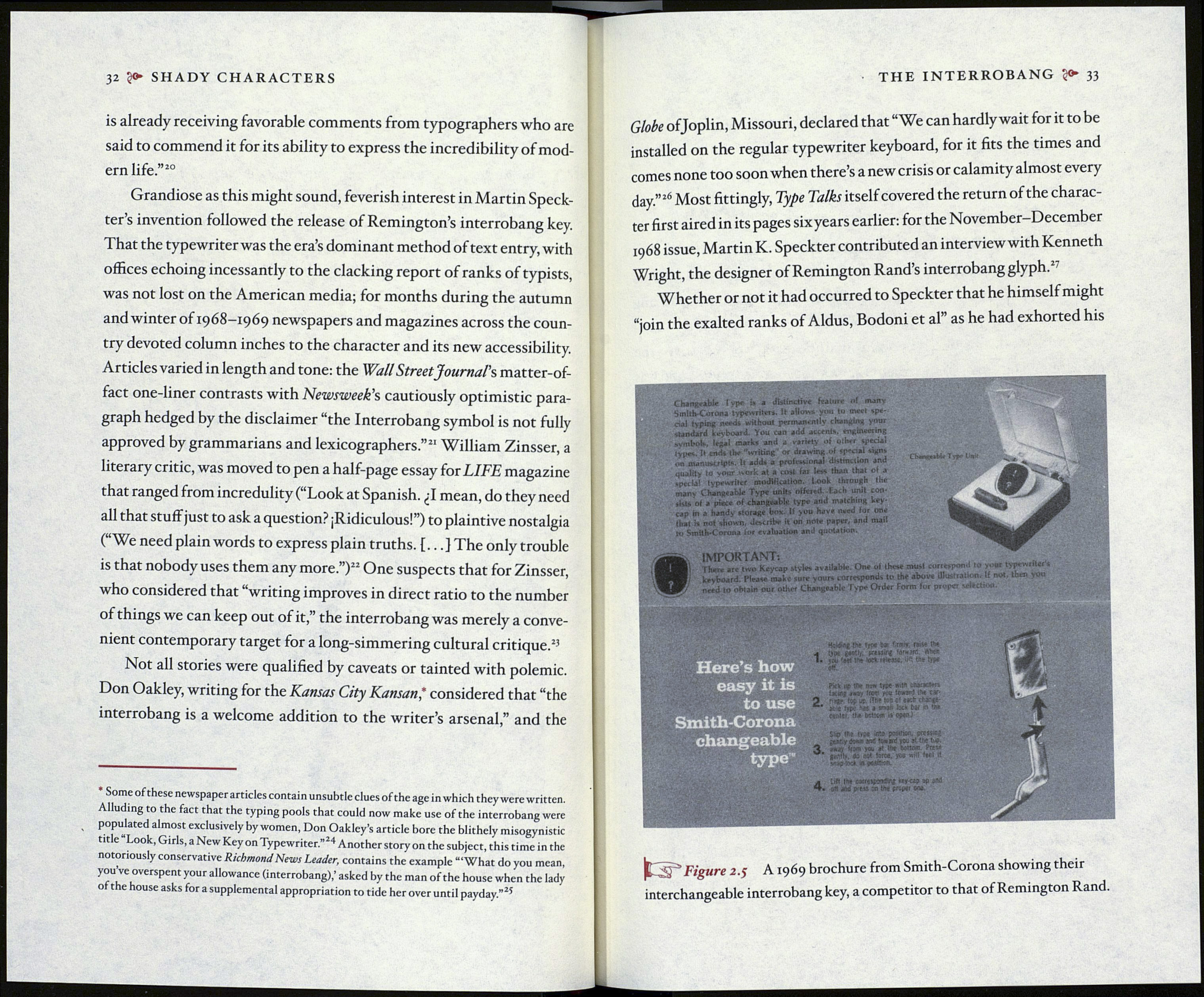 is already receiving favorable comments from typographers who are
said to commend it for its ability to express the incredibility of mod¬
ern life.”20

Grandiose as this might sound, feverish interest in Martin Speck-
ter’s invention followed the release of Remington’s interrobang key.
That the typewriter was the era’s dominant method of text entry, with
offices echoing incessantly to the clacking report of ranks of typists,
was not lost on the American media; for months during the autumn
and winter of 1968-1969 newspapers and magazines across the coun¬
try devoted column inches to the character and its new accessibility.
Articles varied in length and tone: the Wall Street Journal's matter-of-
fact one-liner contrasts with Newsweek’s cautiously optimistic para¬
graph hedged by the disclaimer “the Interrobang symbol is not fully
approved by grammarians and lexicographers.”21 William Zinsser, a
literary critic, was moved to pen a half-page essay for LIFE magazine
that ranged from incredulity (“Look at Spanish. ¿I mean, do they need
all that stuff just to ask a question? ¡Ridiculous!”) to plaintive nostalgia
(“We need plain words to express plain truths. [...} The only trouble
is that nobody uses them any more.”)22 One suspects that for Zinsser,
who considered that “writing improves in direct ratio to the number
of things we can keep out of it,” the interrobang was merely a conve¬
nient contemporary target for a long-simmering cultural critique.23

Not all stories were qualified by caveats or tainted with polemic.
Don Oakley, writing for the Kansas City Kansan,* considered that “the
interrobang is a welcome addition to the writer’s arsenal,” and the

* Some of these newspaper articles contain unsubtle clues of the age in which they were written.
Alluding to the fact that the typing pools that could now make use of the interrobang were
populated almost exclusively by women, Don Oakley’s article bore the blithely misogynistic
title “Look, Girls, a New Key on Typewriter.”24 Another story on the subject, this time in the
notoriously conservative Richmond News Leader, contains the example “‘What do you mean,
you ve overspent your allowance (interrobang),’ asked by the man of the house when the lady
of the house asks for a supplemental appropriation to tide her over until payday.”25

Globe ofjoplin, Missouri, declared that “We can hardly wait for it tobe
installed on the regular typewriter keyboard, for it fits the times and
comes none too soon when there’s a new crisis or calamity almost every
day.”26 Most fittingly, Type Talks itself covered the return of the charac¬
ter first aired in its pages sixyears earlier: for the November-December
1968 issue, Martin K. Speckter contributed an interview with Kenneth
Wright, the designer of Remington Rand’s interrobang glyph.2'

Whether or not it had occurred to Speckter that he himself might
“join the exalted ranks of Aldus, Bodoni et al” as he had exhorted his

^ ¿^Figure 2.3 A1969 brochure from Smith-Corona showing their
interchangeable interrobang key, a competitor to that of Remington Rand.