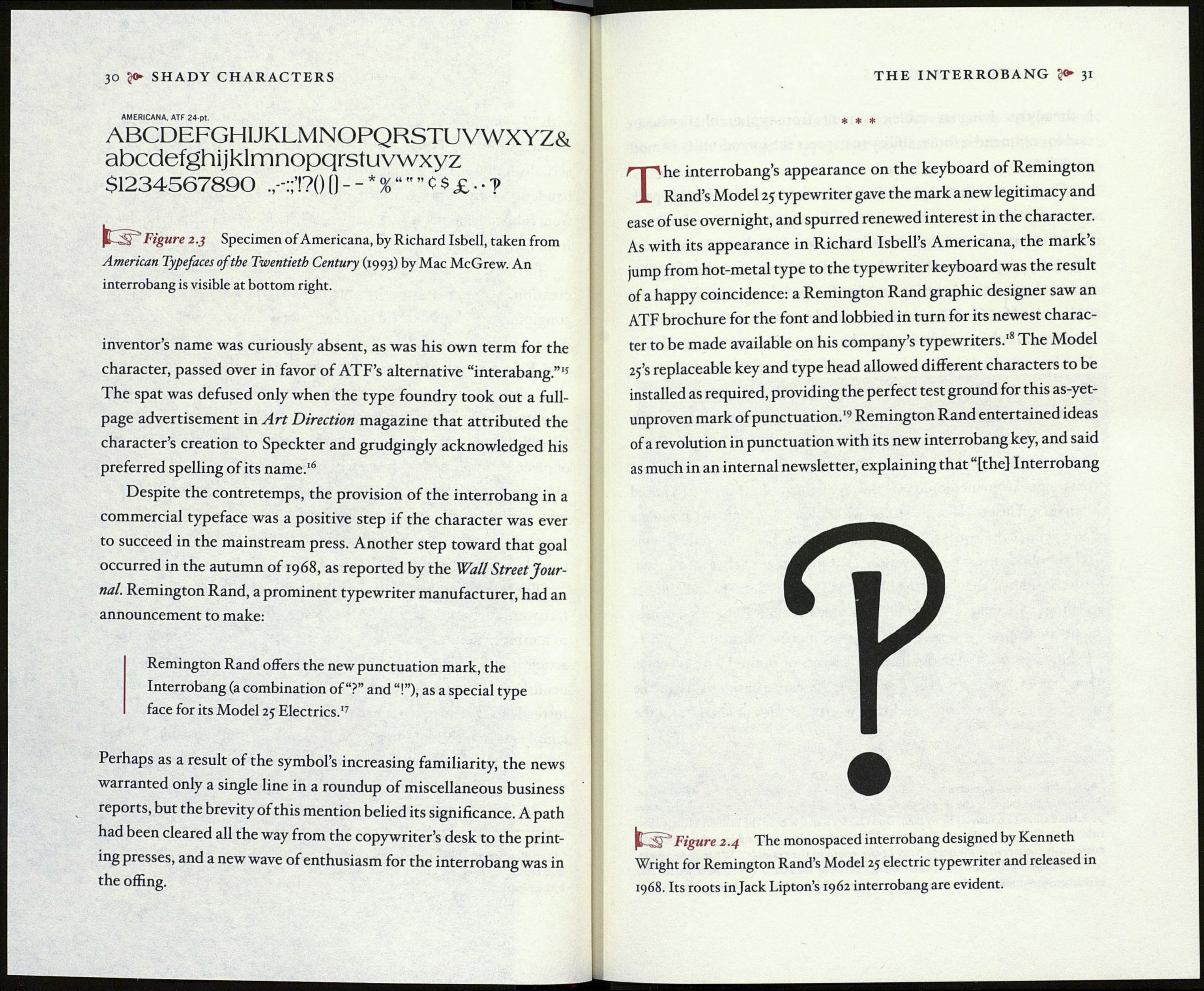 (Eáf5 Figure 2.3 Specimen of Americana, by Richard Isbell, taken from
American Typefaces of the Twentieth Century (1993) by Mac McGrew. An
interrobang is visible at bottom right.

inventor’s name was curiously absent, as was his own term for the
character, passed over in favor of ATF’s alternative “interabang.”'5
The spat was defused only when the type foundry took out a full-
page advertisement in Art Direction magazine that attributed the
character’s creation to Speckter and grudgingly acknowledged his
preferred spelling of its name.16

Despite the contretemps, the provision of the interrobang in a
commercial typeface was a positive step if the character was ever
to succeed in the mainstream press. Another step toward that goal
occurred in the autumn of 1968, as reported by the Wall Street Jour¬
nal. Remington Rand, a prominent typewriter manufacturer, had an
announcement to make:

Remington Rand offers the new punctuation mark, the
Interrobang (a combination of“?” and as a special type
face for its Model 25 Electrics.'7

Perhaps as a result of the symbol’s increasing familiarity, the news
warranted only a single line in a roundup of miscellaneous business
reports, but the brevity of this mention belied its significance. A path
had been cleared all the way from the copywriter’s desk to the print-
ing presses, and a new wave of enthusiasm for the interrobang was in
the offing.

The interrobang’s appearance on the keyboard of Remington
Rand’s Model 25 typewriter gave the mark a new legitimacy and
ease of use overnight, and spurred renewed interest in the character.
As with its appearance in Richard Isbell’s Americana, the mark s
jump from hot-metal type to the typewriter keyboard was the result
of a happy coincidence: a Remington Rand graphic designer saw an
ATF brochure for the font and lobbied in turn for its newest charac¬
ter to be made available on his company’s typewriters.'8 The Model
25’s replaceable key and type head allowed different characters to be
installed as required, providing the perfect test ground for this as-yet-
unproven mark of punctuation.'9 Remington Rand entertained ideas
of a revolution in punctuation with its new interrobang key, and said
as much in an internal newsletter, explaining that “{the} Interrobang

figure 2.4 The monospaced interrobang designed by Kenneth
Wright for Remington Rand’s Model 25 electric typewriter and released in
1968. Its roots in Jack Lipton’s 1962 interrobang are evident.