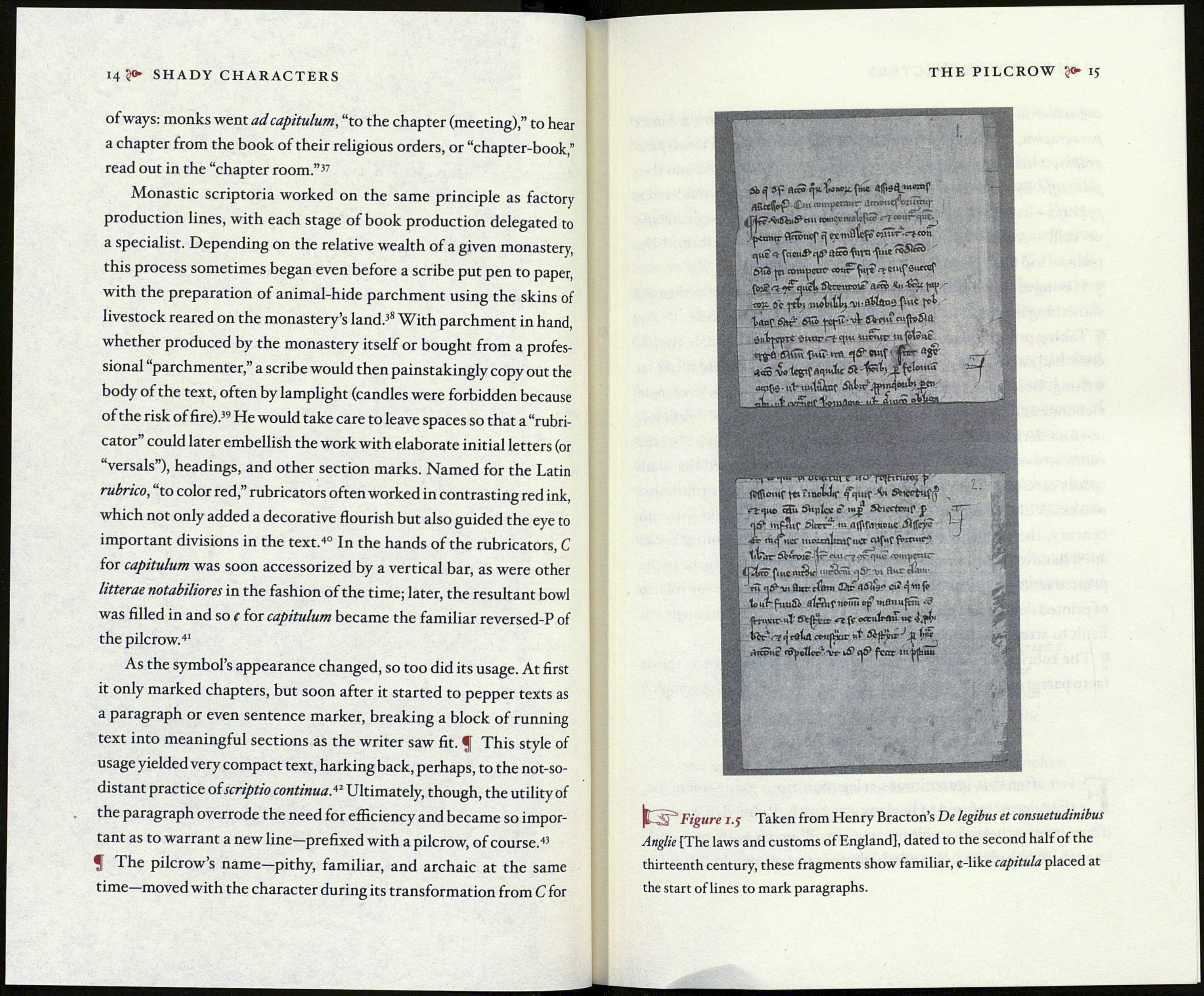 of ways: monks went ad capitulum, “to the chapter (meeting),” to hear
a chapter from the book of their religious orders, or “chapter-book,”
read out in the “chapter room.”37

Monastic scriptoria worked on the same principle as factory
production lines, with each stage of book production delegated to
a specialist. Depending on the relative wealth of a given monastery,
this process sometimes began even before a scribe put pen to paper,
with the preparation of animal-hide parchment using the skins of
livestock reared on the monastery’s land.38 With parchment in hand,
whether produced by the monastery itself or bought from a profes¬
sional parchmenter,” a scribe would then painstakingly copy out the
body of the text, often by lamplight (candles were forbidden because
of the risk of fire).39 He would take care to leave spaces so that a “rubri-
cator” could later embellish the work with elaborate initial letters (or
“versais”), headings, and other section marks. Named for the Latin
rubrico, “to color red,” rubricators often worked in contrasting red ink,
which not only added a decorative flourish but also guided the eye to
important divisions in the text.40 In the hands of the rubricators, С
for capitulum was soon accessorized by a vertical bar, as were other
litterae notabiliores in the fashion of the time; later, the resultant bowl
was filled in and so с for capitulum became the familiar reversed-P of
the pilcrow.41

As the symbol’s appearance changed, so too did its usage. At first
it only marked chapters, but soon after it started to pepper texts as
a paragraph or even sentence marker, breaking a block of running
text into meaningful sections as the writer saw fit. f This style of
usage yielded very compact text, harking back, perhaps, to the not-so-
distant practice o fscriptio continuad2 Ultimately, though, the utility of
the paragraph overrode the need for efficiency and became so impor¬
tant as to warrant a new line—prefixed with a pilcrow, of course.43
Щ The pilcrow’s name—pithy, familiar, and archaic at the same
time—moved with the character during its transformation from С for

Figure 1.5 Taken from Henry Bracton’s De legibus et consuetudinibus
Anglie [The laws and customs of England], dated to the second half of the
thirteenth century, these fragments show familiar, e-like capitula placed at
the start of lines to mark paragraphs.