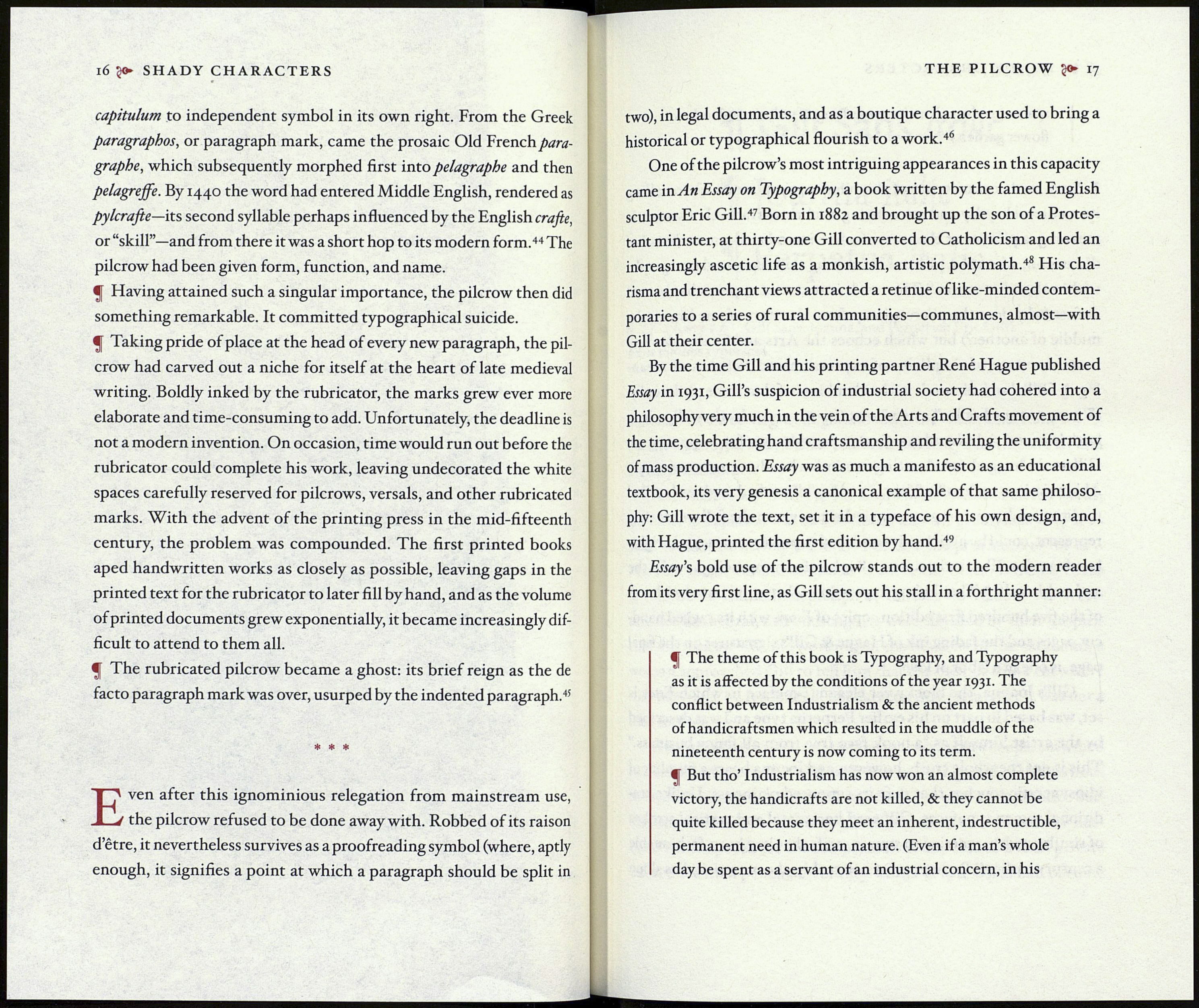 capitulum to independent symbol in its own right. From the Greek
paragraphes, or paragraph mark, came the prosaic Old French para¬
graphe, which subsequently morphed first into pelagraphe and then
pelagrejfe. By 1440 the word had entered Middle English, rendered as
pylcrafte—its second syllable perhaps influenced by the English crafte,
or “skill”—and from there it was a short hop to its modern form.44 The
pilcrow had been given form, function, and name.

J Having attained such a singular importance, the pilcrow then did
something remarkable. It committed typographical suicide.

Ç Taking pride of place at the head of every new paragraph, the pil¬
crow had carved out a niche for itself at the heart of late medieval
writing. Boldly inked by the rubricator, the marks grew ever more
elaborate and time-consuming to add. Unfortunately, the deadline is
not a modern invention. On occasion, time would run out before the
rubricator could complete his work, leaving undecorated the white
spaces carefully reserved for pilcrows, versais, and other rubricated
marks. With the advent of the printing press in the mid-fifteenth
century, the problem was compounded. The first printed books
aped handwritten works as closely as possible, leaving gaps in the
printed text for the rubricator to later fill by hand, and as the volume
of printed documents grew exponentially, it became increasingly dif¬
ficult to attend to them all.

J The rubricated pilcrow became a ghost: its brief reign as the de
facto paragraph mark was over, usurped by the indented paragraph.45

Even after this ignominious relegation from mainstream use,
the pilcrow refused to be done away with. Robbed of its raison
d’être, it nevertheless survives as a proofreading symbol (where, aptly
enough, it signifies a point at which a paragraph should be split in

two), in legal documents, and as a boutique character used to bring a
historical or typographical flourish to a work.46

One of the pilcrow’s most intriguing appearances in this capacity
came in An Essay on Typography, a book written by the famed English
sculptor Eric Gill.47 Born in 1882 and brought up the son of a Protes¬
tant minister, at thirty-one Gill converted to Catholicism and led an
increasingly ascetic life as a monkish, artistic polymath.48 His cha¬
risma and trenchant views attracted a retinue of like-minded contem¬
poraries to a series of rural communities—communes, almost—with
Gill at their center.

By the time Gill and his printing partner René Hague published
Essay in 1931, Gill’s suspicion of industrial society had cohered into a
philosophy very much in the vein of the Arts and Crafts movement of
the time, celebrating hand craftsmanship and reviling the uniformity
of mass production. Essay was as much a manifesto as an educational
textbook, its very genesis a canonical example of that same philoso¬
phy: Gill wrote the text, set it in a typeface of his own design, and,
with Hague, printed the first edition by hand.49

Essay’s bold use of the pilcrow stands out to the modern reader
from its very first line, as Gill sets out his stall in a forthright manner:

J The theme of this book is Typography, and Typography
as it is affected by the conditions of the year 1931. The
conflict between Industrialism & the ancient methods
of handicraftsmen which resulted in the muddle of the
nineteenth century is now coming to its term.

Ç But tho’ Industrialism has now won an almost complete
victory, the handicrafts are not killed, & they cannot be
quite killed because they meet an inherent, indestructible,
permanent need in human nature. (Even if a man’s whole
day be spent as a servant of an industrial concern, in his