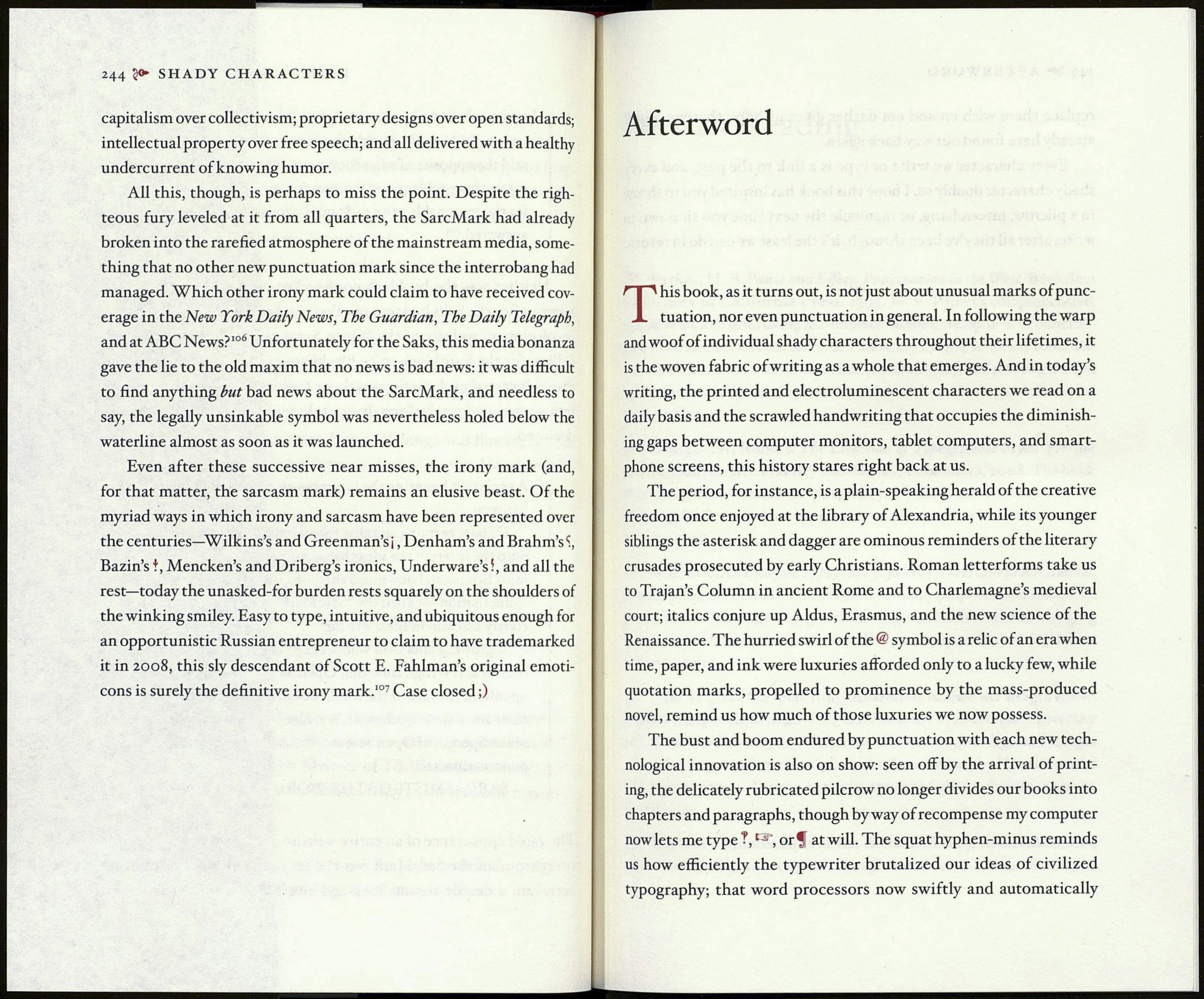 capitalism over collectivism; proprietary designs over open standards;
intellectual property over free speech; and all delivered with a healthy
undercurrent of knowing humor.

All this, though, is perhaps to miss the point. Despite the righ¬
teous fury leveled at it from all quarters, the SarcMark had already
broken into the rarefied atmosphere of the mainstream media, some¬
thing that no other new punctuation mark since the interrobang had
managed. Which other irony mark could claim to have received cov¬
erage in the New York Daily News, The Guardian, The Daily Telegraph,
and at ABC News?106 Unfortunately for the Saks, this media bonanza
gave the lie to the old maxim that no news is bad news: it was difficult
to find anything but bad news about the SarcMark, and needless to
say, the legally unsinkable symbol was nevertheless holed below the
waterline almost as soon as it was launched.

Even after these successive near misses, the irony mark (and,
for that matter, the sarcasm mark) remains an elusive beast. Of the
myriad ways in which irony and sarcasm have been represented over
the centuries—Wilkins’s and Greenman’si, Denham’s and Brahm’s*!,
Bazin’s f, Mencken’s and Driberg’s ironies, Underware’s!, and all the
rest—today the unasked-for burden rests squarely on the shoulders of
the winking smiley. Easy to type, intuitive, and ubiquitous enough for
an opportunistic Russian entrepreneur to claim to have trademarked
it in 2008, this sly descendant of Scott E. Fahlman’s original emoti¬
cons is surely the definitive irony mark.107 Case closed ;)

This book, as it turns out, is not just about unusual marks of punc¬
tuation, nor even punctuation in general. In following the warp
and woof of individual shady characters throughout their lifetimes, it
is the woven fabric ofwriting as a whole that emerges. And in today’s
writing, the printed and electroluminescent characters we read on a
daily basis and the scrawled handwriting that occupies the diminish¬
ing gaps between computer monitors, tablet computers, and smart¬
phone screens, this history stares right back at us.

The period, for instance, is a plain-speaking herald of the creative
freedom once enjoyed at the library of Alexandria, while its younger
siblings the asterisk and dagger are ominous reminders of the literary
crusades prosecuted by early Christians. Roman letterforms take us
to Trajan’s Column in ancient Rome and to Charlemagne’s medieval
court; italics conjure up Aldus, Erasmus, and the new science of the
Renaissance. The hurried swirl of the @ symbol is a relic of an era when
time, paper, and ink were luxuries afforded only to a lucky few, while
quotation marks, propelled to prominence by the mass-produced
novel, remind us how much of those luxuries we now possess.

The bust and boom endured by punctuation with each new tech¬
nological innovation is also on show: seen off by the arrival of print¬
ing, the delicately rubricated pilcrow no longer divides our books into
chapters and paragraphs, though byway of recompense my computer
now lets me type ?, or ff at will. The squat hyphen-minus reminds
us how efficiently the typewriter brutalized our ideas of civilized
typography; that word processors now swiftly and automatically