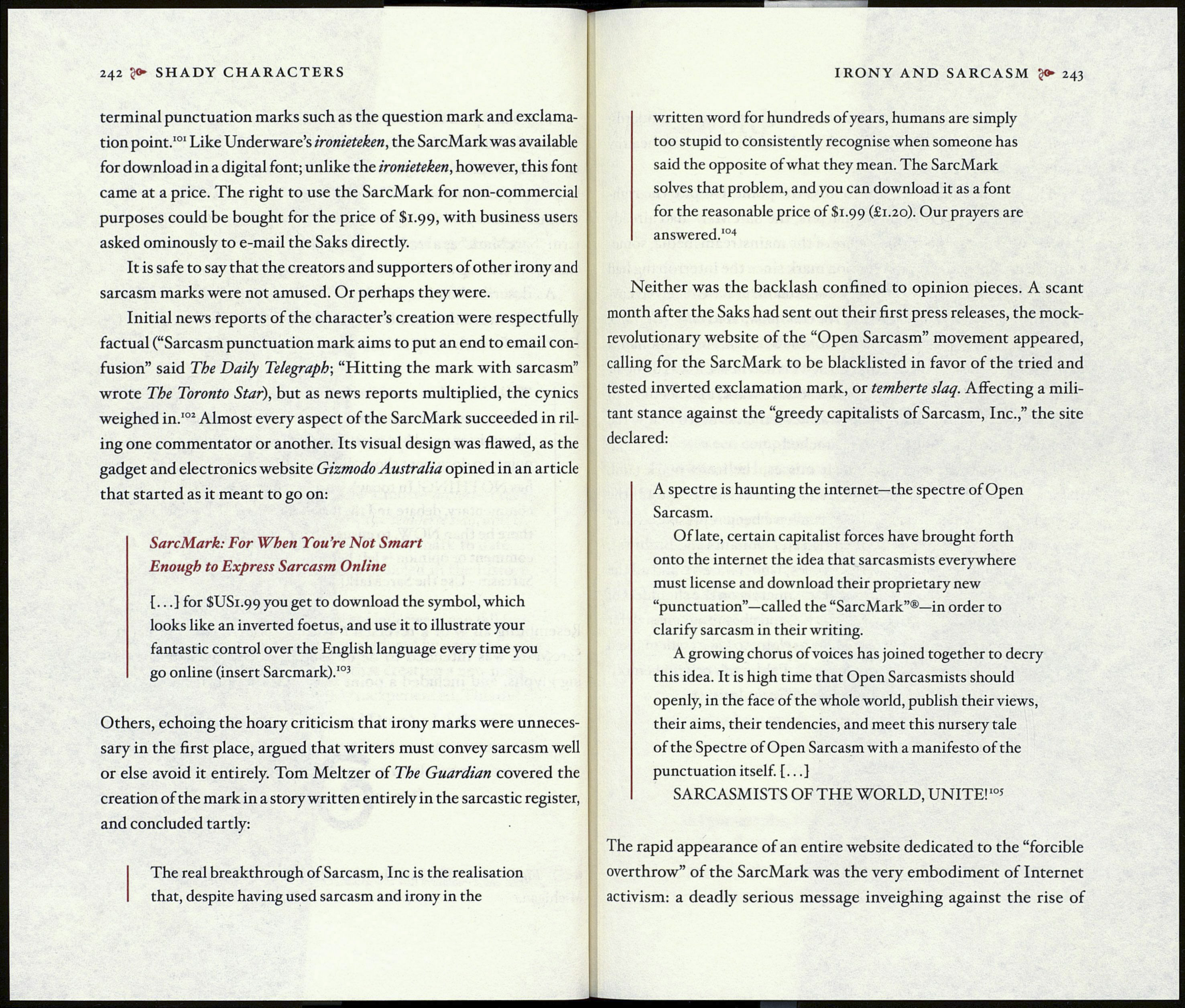 terminal punctuation marks such as the question mark and exclama¬
tion point.101 Like Underware’s ironieteken, the SarcMark was available
for download in a digital font; unlike the ironieteken, however, this font
came at a price. The right to use the SarcMark for non-commercial
purposes could be bought for the price of $1.99, with business users
asked ominously to e-mail the Saks directly.

It is safe to say that the creators and supporters of other irony and
sarcasm marks were not amused. Or perhaps they were.

Initial news reports of the character’s creation were respectfully
factual (“Sarcasm punctuation mark aims to put an end to email con¬
fusion” said The Daily Telegraph-, “Hitting the mark with sarcasm”
wrote The Toronto Star), but as news reports multiplied, the cynics
weighed in.102 Almost every aspect of the SarcMark succeeded in ril¬
ing one commentator or another. Its visual design was flawed, as the
gadget and electronics website Gizmodo Australia opined in an article
that started as it meant to go on:

SarcMark: For When You’re Not Smart
Enough to Express Sarcasm Online

{...} for SUSi-99 you get to download the symbol, which
looks like an inverted foetus, and use it to illustrate your
fantastic control over the English language every time you
go online (insert Sarcmark).103

Others, echoing the hoary criticism that irony marks were unneces¬
sary in the first place, argued that writers must convey sarcasm well
or else avoid it entirely. Tom Meltzer of The Guardian covered the
creation of the mark in a story written entirely in the sarcastic register,
and concluded tartly:

The real breakthrough of Sarcasm, Inc is the realisation
that, despite having used sarcasm and irony in the

written word for hundreds of years, humans are simply
too stupid to consistently recognise when someone has
said the opposite of what they mean. The SarcMark
solves that problem, and you can download it as a font
for the reasonable price of $1.99 (£1.20). Our prayers are
answered.104

Neither was the backlash confined to opinion pieces. A scant
month after the Saks had sent out their first press releases, the mock-
revolutionary website of the “Open Sarcasm” movement appeared,
calling for the SarcMark to be blacklisted in favor of the tried and
tested inverted exclamation mark, or temherte slaq. Affecting a mili¬
tant stance against the “greedy capitalists of Sarcasm, Inc.,” the site
declared:

A spectre is haunting the internet—the spectre of Open
Sarcasm.

Of late, certain capitalist forces have brought forth
onto the internet the idea that sarcasmists everywhere
must license and download their proprietary new
“punctuation”—called the “SarcMark”®—in order to
clarify sarcasm in their writing.

A growing chorus of voices has joined together to decry
this idea. It is high time that Open Sarcasmists should
openly, in the face of the whole world, publish their views,
their aims, their tendencies, and meet this nursery tale
of the Spectre of Open Sarcasm with a manifesto of the
punctuation itself. {...}

SARCASMISTS OF THE WORLD, UNITE!105

The rapid appearance of an entire website dedicated to the “forcible
overthrow” of the SarcMark was the very embodiment of Internet
activism: a deadly serious message inveighing against the rise of