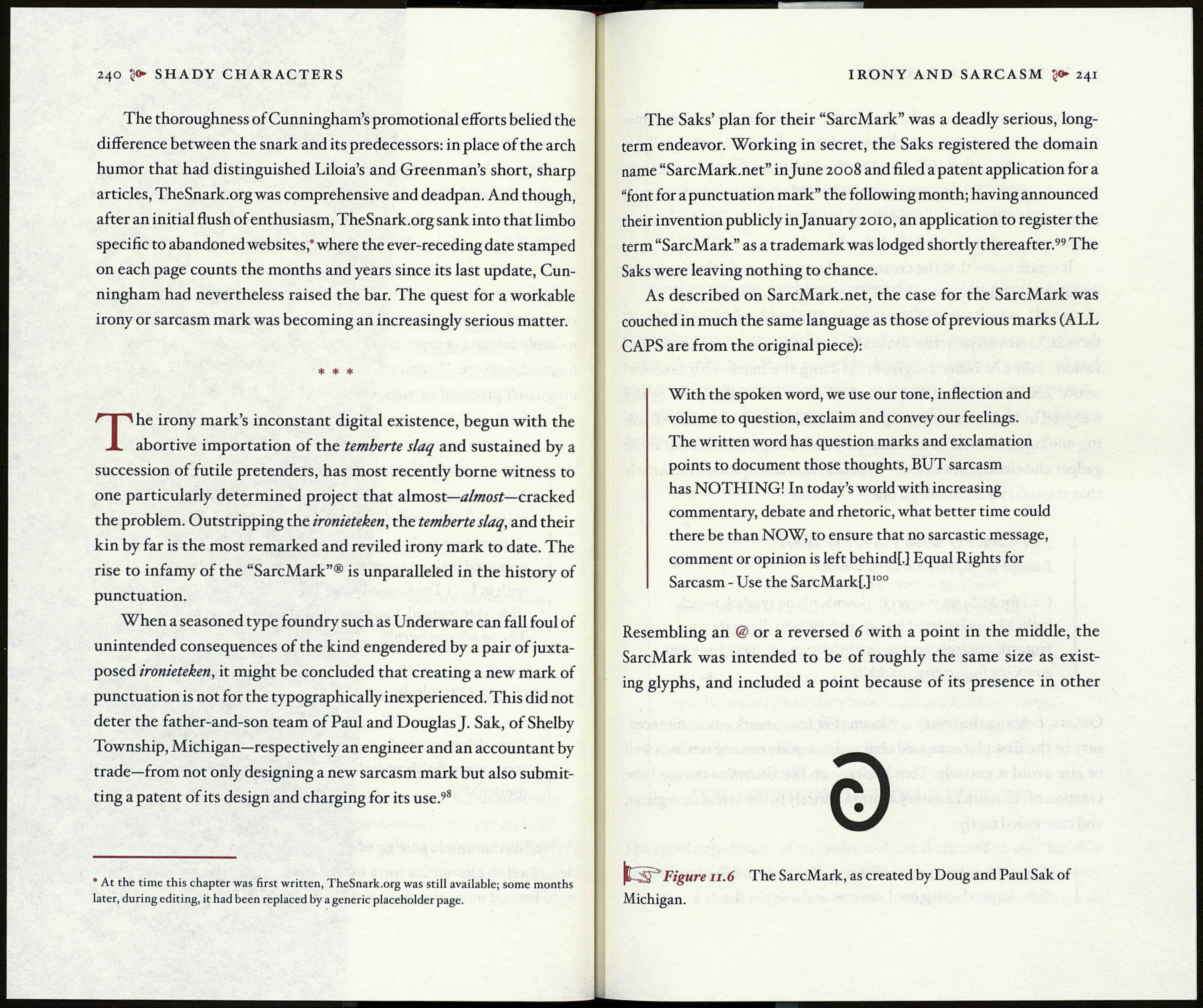 The thoroughness of Cunningham’s promotional efforts belied the
difference between the snark and its predecessors: in place of the arch
humor that had distinguished Liloia’s and Greenman’s short, sharp
articles, TheSnark.org was comprehensive and deadpan. And though,
after an initial flush of enthusiasm, TheSnark.org sank into that limbo
specific to abandoned websites,* where the ever-receding date stamped
on each page counts the months and years since its last update, Cun¬
ningham had nevertheless raised the bar. The quest for a workable
irony or sarcasm mark was becoming an increasingly serious matter.

The irony mark’s inconstant digital existence, begun with the
abortive importation of the temherte slaq and sustained by a
succession of futile pretenders, has most recently borne witness to
one particularly determined project that almost—almost— cracked
the problem. Outstripping the ironieteken, the temherte slaq, and their
kin by far is the most remarked and reviled irony mark to date. The
rise to infamy of the “SarcMark”® is unparalleled in the history of
punctuation.

When a seasoned type foundry such as Underware can fall foul of
unintended consequences of the kind engendered by a pair of juxta¬
posed ironieteken, it might be concluded that creating a new mark of
punctuation is not for the typographically inexperienced. This did not
deter the father-and-son team of Paul and Douglas J. Sak, of Shelby
Township, Michigan—respectively an engineer and an accountant by
trade—from not only designing a new sarcasm mark but also submit¬
ting a patent of its design and charging for its use.98

* At the time this chapter was first written, TheSnark.org was still available; some months
later, during editing, it had been replaced by a generic placeholder page.

The Saks’ plan for their “SarcMark” was a deadly serious, long¬
term endeavor. Working in secret, the Saks registered the domain
name “SarcMark.net” injune 2008 and filed a patent application for a
“font for a punctuation mark” the following month; having announced
their invention publicly injanuary 2010, an application to register the
term “SarcMark” as a trademark was lodged shortly thereafter.99 The
Saks were leaving nothing to chance.

As described on SarcMark.net, the case for the SarcMark was
couched in much the same language as those of previous marks (ALL
CAPS are from the original piece):

With the spoken word, we use our tone, inflection and
volume to question, exclaim and convey our feelings.

The written word has question marks and exclamation
points to document those thoughts, BUT sarcasm
has NOTHING! In today’s world with increasing
commentary, debate and rhetoric, what better time could
there be than NOW, to ensure that no sarcastic message,
comment or opinion is left behind{.] Equal Rights for
Sarcasm - Use the SarcMark[.}IO°

Resembling an @ or a reversed 6 with a point in the middle, the
SarcMark was intended to be of roughly the same size as exist-
ing glyphs, and included a point because of its presence in other

jCäf2’ Figure a.6 The SarcMark, as created by Doug and Paul Sak of
Michigan.