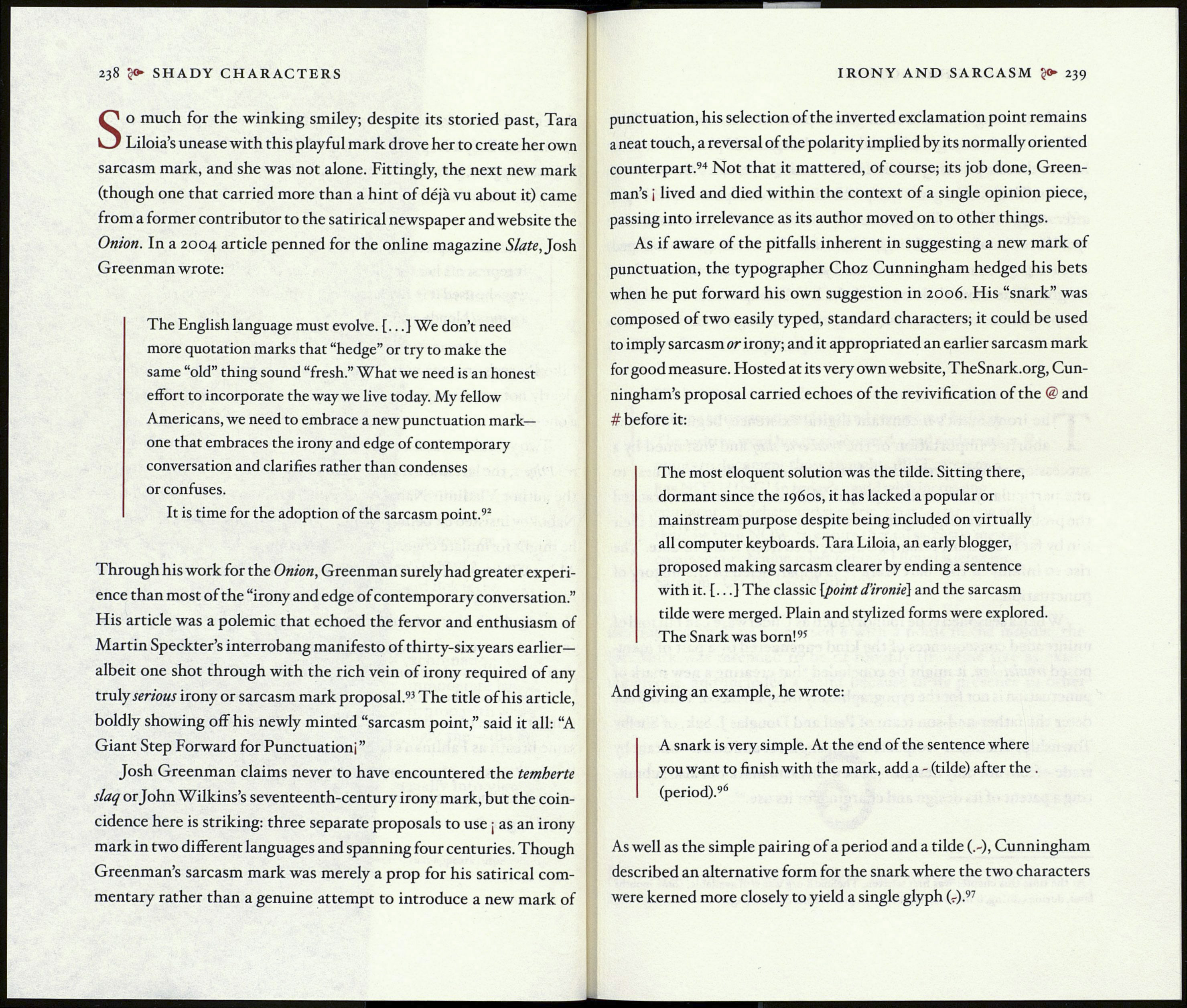 So much for the winking smiley; despite its storied past, Tara
Libia’s unease with this playful mark drove her to create her own
sarcasm mark, and she was not alone. Fittingly, the next new mark
(though one that carried more than a hint of déjà vu about it) came
from a former contributor to the satirical newspaper and website the
Onion. In a 2004 article penned for the online magazine Slate, Josh
Greenman wrote:

The English language must evolve. {... ] We don’t need
more quotation marks that “hedge” or try to make the
same “old” thing sound “fresh.” What we need is an honest
effort to incorporate the way we live today. My fellow
Americans, we need to embrace a new punctuation mark—
one that embraces the irony and edge of contemporary
conversation and clarifies rather than condenses
or confuses.

It is time for the adoption of the sarcasm point.92

Through his work for the Onion, Greenman surely had greater experi¬
ence than most of the “irony and edge of contemporary conversation.”
His article was a polemic that echoed the fervor and enthusiasm of
Martin Speckter’s interrobang manifesto of thirty-six years earlier—
albeit one shot through with the rich vein of irony required of any
truly serious irony or sarcasm mark proposal.93 The title of his article,
boldly showing off his newly minted “sarcasm point,” said it all: “A
Giant Step Forward for Punctuationi”

Josh Greenman claims never to have encountered the temherte
slaq or John Wilkins’s seventeenth-century irony mark, but the coin¬
cidence here is striking: three separate proposals to use ¡ as an irony
mark in two different languages and spanning four centuries. Though
Greenman’s sarcasm mark was merely a prop for his satirical com¬
mentary rather than a genuine attempt to introduce a new mark of

punctuation, his selection of the inverted exclamation point remains
a neat touch, a reversal of the polarity implied by its normally oriented
counterpart.94 Not that it mattered, of course; its job done, Green¬
man’s ¡ lived and died within the context of a single opinion piece,
passing into irrelevance as its author moved on to other things.

As if aware of the pitfalls inherent in suggesting a new mark of
punctuation, the typographer Choz Cunningham hedged his bets
when he put forward his own suggestion in 2006. His “snark” was
composed of two easily typed, standard characters; it could be used
to imply sarcasm or irony; and it appropriated an earlier sarcasm mark
for good measure. Hosted at its very own website, TheSnark.org, Cun¬
ningham’s proposal carried echoes of the revivification of the @ and
# before it:

The most eloquent solution was the tilde. Sitting there,
dormant since the 1960s, it has lacked a popular or
mainstream purpose despite being included on virtually
all computer keyboards. Tara Libia, an early blogger,
proposed making sarcasm clearer by ending a sentence
with it. [...} The classic [point d’ironie] and the sarcasm
tilde were merged. Plain and stylized forms were explored.

The Snark was born!95

And giving an example, he wrote:

A snark is very simple. At the end of the sentence where
you want to finish with the mark, add a - (tilde) after the .
(period).96

As well as the simple pairing of a period and a tilde (.-), Cunningham
described an alternative form for the snark where the two characters
were kerned more closely to yield a single glyph (-).97