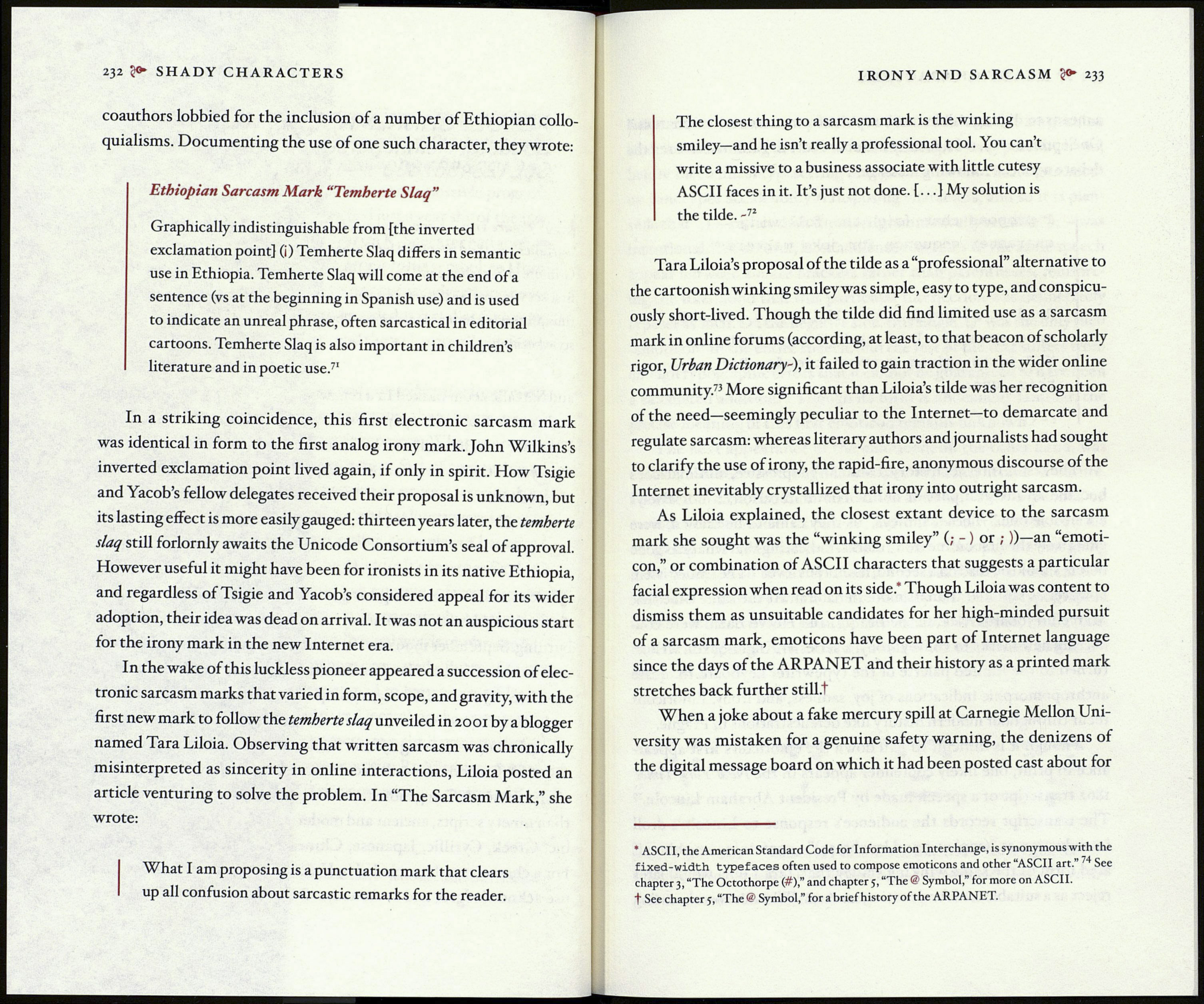 coauthors lobbied for the inclusion of a number of Ethiopian collo¬
quialisms. Documenting the use of one such character, they wrote:

Graphically indistinguishable from [the inverted
exclamation point} (i) Temherte Slaq differs in semantic
use in Ethiopia. Temherte Slaq will come at the end of a
sentence (vs at the beginning in Spanish use) and is used
to indicate an unreal phrase, often sarcastical in editorial
cartoons. Temherte Slaq is also important in children’s
literature and in poetic use.71

In a striking coincidence, this first electronic sarcasm mark
was identical in form to the first analog irony mark. John Wilkins’s
inverted exclamation point lived again, if only in spirit. How Tsigie
and Yacob’s fellow delegates received their proposal is unknown, but
its lasting effect is more easily gauged: thirteen years later, the temherte
slaq still forlornly awaits the Unicode Consortium’s seal of approval.
However useful it might have been for ironists in its native Ethiopia,
and regardless of Tsigie and Yacob’s considered appeal for its wider
adoption, their idea was dead on arrival. It was not an auspicious start
for the irony mark in the new Internet era.

In the wake of this luckless pioneer appeared a succession of elec¬
tronic sarcasm marks that varied in form, scope, and gravity, with the
first new mark to follow the temherte slaq unveiled in 2001 by a blogger
named Tara Liloia. Observing that written sarcasm was chronically
misinterpreted as sincerity in online interactions, Liloia posted an
article venturing to solve the problem. In “The Sarcasm Mark,” she
wrote:

What I am proposing is a punctuation mark that clears
up all confusion about sarcastic remarks for the reader.

The closest thing to a sarcasm mark is the winking
smiley—and he isn’t really a professional tool. You can’t
write a missive to a business associate with little cutesy
ASCII faces in it. It’s just not done. {...} My solution is
the tilde. ~72

Tara Libia’s proposal of the tilde as a “professional” alternative to
the cartoonish winking smiley was simple, easy to type, and conspicu¬
ously short-lived. Though the tilde did find limited use as a sarcasm
mark in online forums (according, at least, to that beacon of scholarly
rigor, Urban Dictionary-), it failed to gain traction in the wider online
community.73 More significant than Libia’s tilde was her recognition
of the need—seemingly peculiar to the Internet—to demarcate and
regulate sarcasm: whereas literary authors and journalists had sought
to clarify the use of irony, the rapid-fire, anonymous discourse of the
Internet inevitably crystallized that irony into outright sarcasm.

As Libia explained, the closest extant device to the sarcasm
mark she sought was the “winking smiley” (; - ) or ; ))—an “emoti¬
con,” or combination of ASCII characters that suggests a particular
facial expression when read on its side.’ Though Libia was content to
dismiss them as unsuitable candidates for her high-minded pursuit
of a sarcasm mark, emoticons have been part of Internet language
since the days of the ARPANET and their history as a printed mark
stretches back further still.t

When a joke about a fake mercury spill at Carnegie Mellon Uni¬
versity was mistaken for a genuine safety warning, the denizens of
the digital message board on which it had been posted cast about for