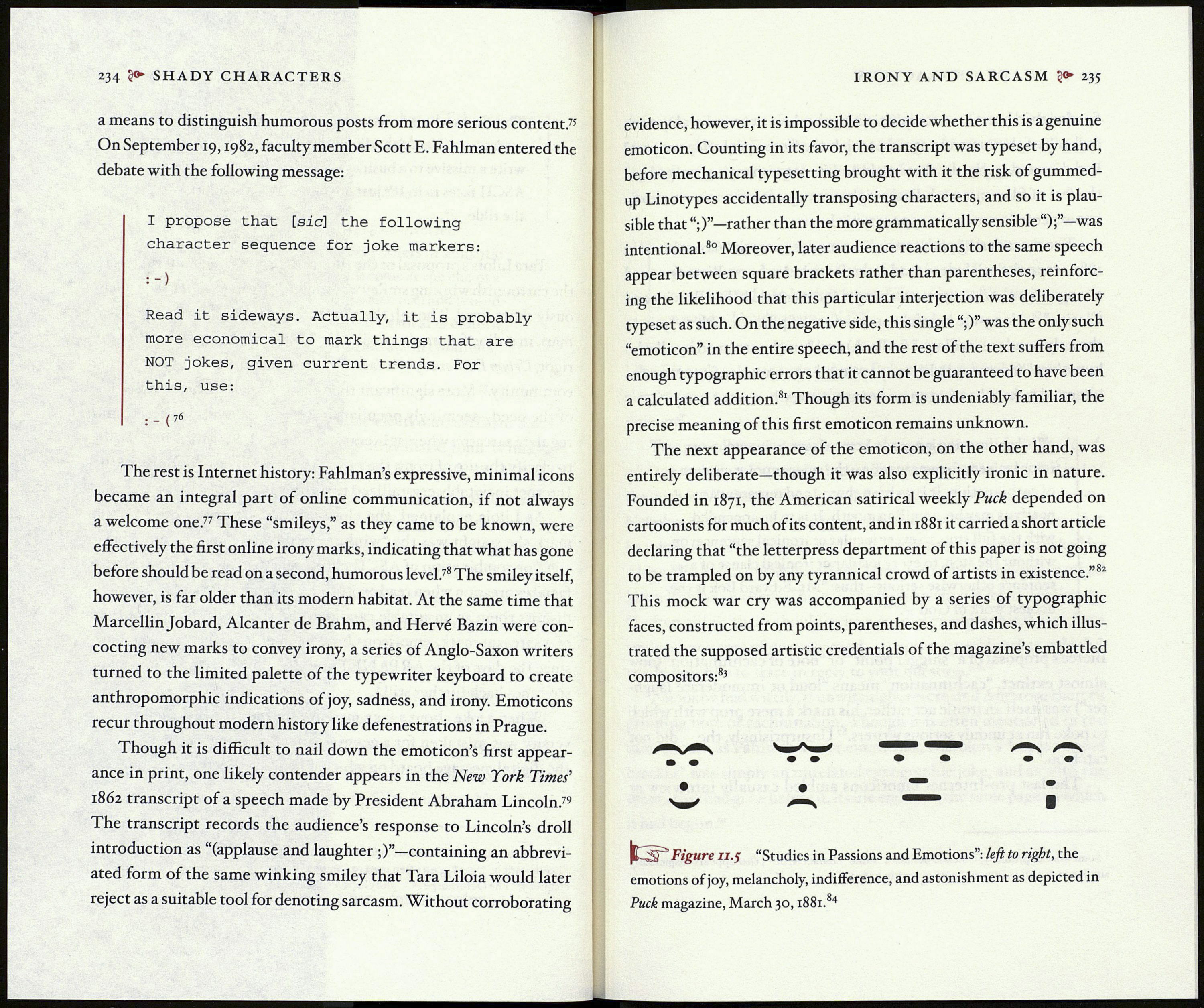 I propose that [sic] the following
character sequence for joke markers:

Read it sideways. Actually, it is probably
more economical to mark things that are
NOT jokes, given current trends. For
this, use:

The rest is Internet history: Fahlman’s expressive, minimal icons
became an integral part of online communication, if not always
a welcome one.77 These “smileys,” as they came to be known, were
effectively the first online irony marks, indicating that what has gone
before should be read on a second, humorous level.78 The smiley itself,
however, is far older than its modern habitat. At the same time that
Marcellin Jobard, Alcanter de Brahm, and Hervé Bazin were con¬
cocting new marks to convey irony, a series of Anglo-Saxon writers
turned to the limited palette of the typewriter keyboard to create
anthropomorphic indications of joy, sadness, and irony. Emoticons
recur throughout modern history like defenestrations in Prague.

Though it is difficult to nail down the emoticon’s first appear¬
ance in print, one likely contender appears in the New Tork Times’
1862 transcript of a speech made by President Abraham Lincoln.79
The transcript records the audience’s response to Lincoln’s droll
introduction as “(applause and laughter ;)”—containing an abbrevi¬
ated form of the same winking smiley that Tara Liloia would later
reject as a suitable tool for denoting sarcasm. Without corroborating

evidence, however, it is impossible to decide whether this is a genuine
emoticon. Counting in its favor, the transcript was typeset by hand,
before mechanical typesetting brought with it the risk of gummed-
up Linotypes accidentally transposing characters, and so it is plau¬
sible that rather than the more grammatically sensible was
intentional.80 Moreover, later audience reactions to the same speech
appear between square brackets rather than parentheses, reinforc¬
ing the likelihood that this particular interjection was deliberately
typeset as such. On the negative side, this single was the only such
“emoticon” in the entire speech, and the rest of the text suffers from
enough typographic errors that it cannot be guaranteed to have been
a calculated addition.8' Though its form is undeniably familiar, the
precise meaning of this first emoticon remains unknown.

The next appearance of the emoticon, on the other hand, was
entirely deliberate—though it was also explicitly ironic in nature.
Founded in 1871, the American satirical weekly Puck depended on
cartoonists for much of its content, and in 1881 it carried a short article
declaring that “the letterpress department of this paper is not going
to be trampled on by any tyrannical crowd of artists in existence.”82
This mock war cry was accompanied by a series of typographic
faces, constructed from points, parentheses, and dashes, which illus¬
trated the supposed artistic credentials of the magazine’s embattled
compositors:83

Jy' Figure и.5 “Studies in Passions and Emotions”: left to right, the
emotions of joy, melancholy, indifference, and astonishment as depicted in
Puck magazine, March 30,1881.84