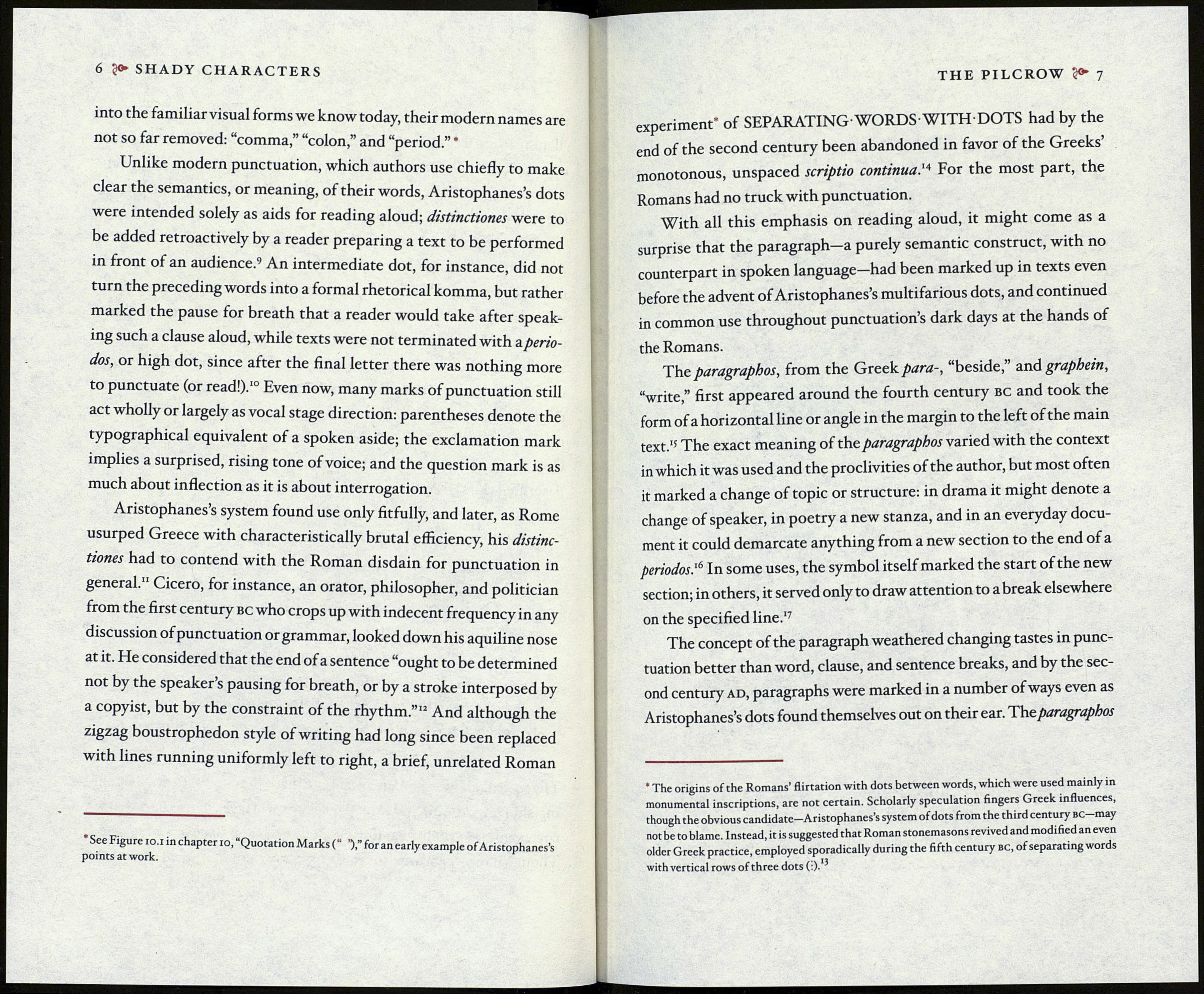 into the familiar visual forms we know today, their modern names are
not so far removed: “comma,” “colon,” and “period.” *

Unlike modern punctuation, which authors use chiefly to make
clear the semantics, or meaning, of their words, Aristophanes’s dots
were intended solely as aids for reading aloud; distinctiones were to
be added retroactively by a reader preparing a text to be performed
in front of an audience.9 An intermediate dot, for instance, did not
turn the preceding words into a formal rhetorical komma, but rather
marked the pause for breath that a reader would take after speak¬
ing such a clause aloud, while texts were not terminated with a perio¬
dos, or high dot, since after the final letter there was nothing more
to punctuate (or read!).10 Even now, many marks of punctuation still
act wholly or largely as vocal stage direction: parentheses denote the
typographical equivalent of a spoken aside; the exclamation mark
implies a surprised, rising tone of voice; and the question mark is as
much about inflection as it is about interrogation.

Aristophanes’s system found use only fitfully, and later, as Rome
usurped Greece with characteristically brutal efficiency, his distinc-
tioTtes had to contend with the Roman disdain for punctuation in
general.11 Cicero, for instance, an orator, philosopher, and politician
from the first century вс who crops up with indecent frequency in any
discussion of punctuation or grammar, looked down his aquiline nose
at it. He considered that the end of a sentence “ought to be determined
not by the speaker’s pausing for breath, or by a stroke interposed by
a copyist, but by the constraint of the rhythm.”12 And although the
zigzag boustrophedon style of writing had long since been replaced
with lines running uniformly left to right, a brief, unrelated Roman

* See Figure io.i in chapter 10, “Quotation Marks (“ for an early example of Aristophanes’s

experiment* of SEPARATING WORDS WITH DOTS had by the
end of the second century been abandoned in favor of the Greeks’
monotonous, unspaced scriptio continuai4 For the most part, the
Romans had no truck with punctuation.

With all this emphasis on reading aloud, it might come as a
surprise that the paragraph—a purely semantic construct, with no
counterpart in spoken language—had been marked up in texts even
before the advent of Aristophanes’s multifarious dots, and continued
in common use throughout punctuation’s dark days at the hands of
the Romans.

The paragraphes, from the Greek para-, “beside,” and graphein,
“write,” first appeared around the fourth century вс and took the
form of a horizontal line or angle in the margin to the left of the main
text.'5 The exact meaning of the paragraphes varied with the context
in which it was used and the proclivities of the author, but most often
it marked a change of topic or structure: in drama it might denote a
change of speaker, in poetry a new stanza, and in an everyday docu¬
ment it could demarcate anything from a new section to the end of a
periodosi6 In some uses, the symbol itself marked the start of the new
section; in others, it served only to draw attention to a break elsewhere

on the specified line.17

The concept of the paragraph weathered changing tastes in punc¬
tuation better than word, clause, and sentence breaks, and by the sec¬
ond century ad, paragraphs were marked in a number of ways even as
Aristophanes’s dots found themselves out on their ear. The paragraphes

* The origins of the Romans’ flirtation with dots between words, which were used mainly in
monumental inscriptions, are not certain. Scholarly speculation fingers Greek influences,
though the obvious candidate-Aristophanes’s system of dots from the third century вс-may
not be to blame. Instead, it is suggested that Roman stonemasons revived and modified an even
older Greek practice, employed sporadically during the fifth century вс, of separating words
with vertical rows of three dots (:).’5