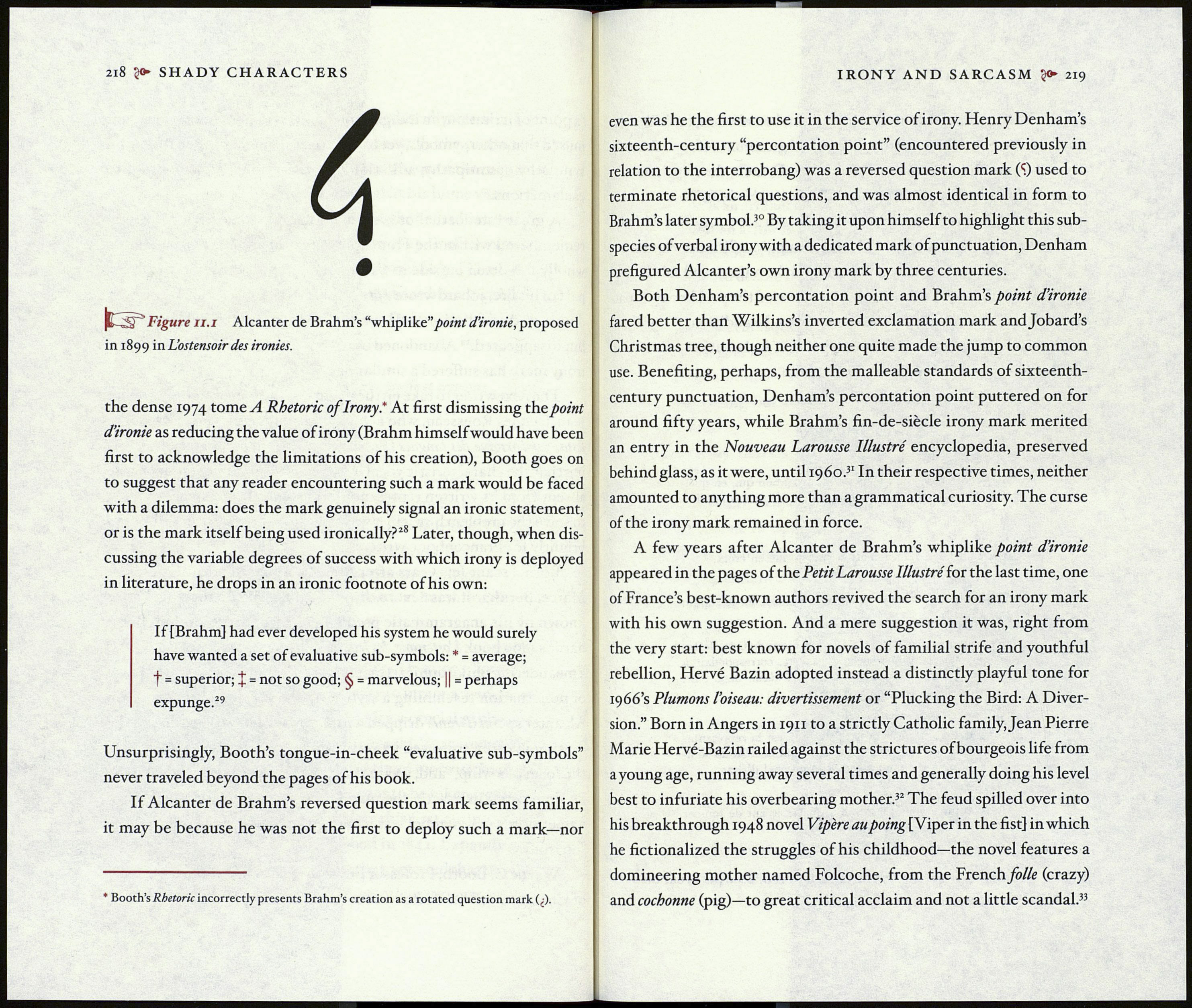 the dense 1974 tome A Rhetoric of Irony* At first dismissing the point
d’ironie as reducing the value of irony (Brahm himself would have been
first to acknowledge the limitations of his creation), Booth goes on
to suggest that any reader encountering such a mark would be faced
with a dilemma: does the mark genuinely signal an ironic statement,
or is the mark itself being used ironically?28 Later, though, when dis¬
cussing the variable degrees of success with which irony is deployed
in literature, he drops in an ironic footnote of his own:

If {Brahm] had ever developed his system he would surely
have wanted a set of evaluative sub-symbols: * = average;
t = superior; J = not so good; § = marvelous; || = perhaps
expunge.29

Unsurprisingly, Booth’s tongue-in-cheek “evaluative sub-symbols”
never traveled beyond the pages of his book.

If Alcanter de Brahm’s reversed question mark seems familiar,
it may be because he was not the first to deploy such a mark—nor

even was he the first to use it in the service of irony. Henry Denham’s
sixteenth-century “percontation point” (encountered previously in
relation to the interrobang) was a reversed question mark (S) used to
terminate rhetorical questions, and was almost identical in form to
Brahm’s later symbol.30 By taking it upon himself to highlight this sub¬
species of verbal irony with a dedicated mark of punctuation, Denham
prefigured Alcanter’s own irony mark by three centuries.

Both Denham’s percontation point and Brahm’s point d’ironie
fared better than Wilkins’s inverted exclamation mark and Jobard’s
Christmas tree, though neither one quite made the jump to common
use. Benefiting, perhaps, from the malleable standards of sixteenth-
century punctuation, Denham’s percontation point puttered on for
around fifty years, while Brahm’s fin-de-siècle irony mark merited
an entry in the Nouveau Larousse Illustré encyclopedia, preserved
behind glass, as it were, until 196o.31 In their respective times, neither
amounted to anything more than a grammatical curiosity. The curse
of the irony mark remained in force.

A few years after Alcanter de Brahm’s whiplike point d’ironie
appeared in the pages of the Petit Larousse Illustré for the last time, one
of France’s best-known authors revived the search for an irony mark
with his own suggestion. And a mere suggestion it was, right from
the very start: best known for novels of familial strife and youthful
rebellion, Hervé Bazin adopted instead a distinctly playful tone for
1966’s Plumons l’oiseau: divertissement or “Plucking the Bird: A Diver¬
sion.” Born in Angers in 1911 to a strictly Catholic family, Jean Pierre
Marie Hervé-Bazin railed against the strictures of bourgeois life from
a young age, running away several times and generally doing his level
best to infuriate his overbearing mother.32 The feud spilled over into
his breakthrough 1948 novel Vipère au poing [V iper in the fist] in which
he fictionalized the struggles of his childhood—the novel features a
domineering mother named Folcoche, from the French folle (crazy)
and cochonne (pig)—to great critical acclaim and not a little scandal.33