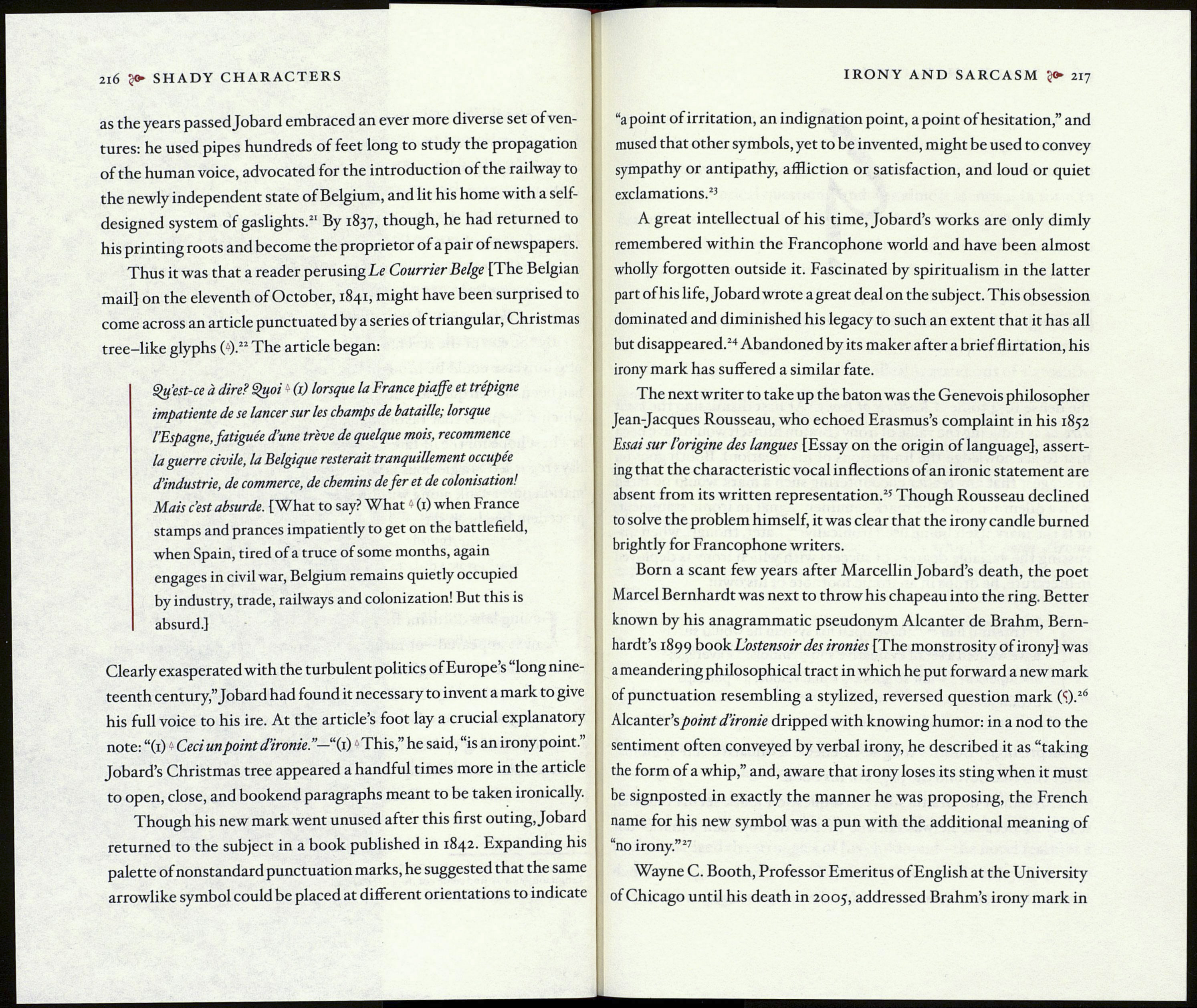 as the years passed Jobard embraced an ever more diverse set of ven¬
tures: he used pipes hundreds of feet long to study the propagation
of the human voice, advocated for the introduction of the railway to
the newly independent state of Belgium, and lit his home with a self¬
designed system of gaslights.21 By 1837, though, he had returned to
his printing roots and become the proprietor of a pair of newspapers.

Thus it was that a reader perusing Le Courrier Belge [The Belgian
mail} on the eleventh of October, 1841, might have been surprised to
come across an article punctuated by a series of triangular, Christmas
tree-like glyphs (J.22 The article began:

Mais c’est absurde. [What to say? What « (i) when France
stamps and prances impatiently to get on the battlefield,
when Spain, tired of a truce of some months, again
engages in civil war, Belgium remains quietly occupied
by industry, trade, railways and colonization! But this is
absurd.}

Clearly exasperated with the turbulent politics of Europe’s “long nine¬
teenth century,” Jobard had found it necessary to invent a mark to give
his full voice to his ire. At the article’s foot lay a crucial explanatory
note: “(1) « Ceci un point d’ironie.”-1' (i) This,” he said, “is an irony point.”
Jobard’s Christmas tree appeared a handful times more in the article
to open, close, and bookend paragraphs meant to be taken ironically.

Though his new mark went unused after this first outing, Jobard
returned to the subject in a book published in 1842. Expanding his
palette of nonstandard punctuation marks, he suggested that the same
arrowlike symbol could be placed at different orientations to indicate

“a point of irritation, an indignation point, a point of hesitation,” and
mused that other symbols, yet to be invented, might be used to convey
sympathy or antipathy, affliction or satisfaction, and loud or quiet
exclamations.4

A great intellectual of his time, Jobard’s works are only dimly
remembered within the Francophone world and have been almost
wholly forgotten outside it. Fascinated by spiritualism in the latter
part ofhis life, Jobard wrote agreat deal on the subject. This obsession
dominated and diminished his legacy to such an extent that it has all
but disappeared.24 Abandoned by its maker after a brief flirtation, his
irony mark has suffered a similar fate.

The next writer to take up the baton was the Genevois philosopher
Jean-Jacques Rousseau, who echoed Erasmus’s complaint in his 1852
Essai sur l’origine des langues [Essay on the origin of language}, assert¬
ing that the characteristic vocal inflections of an ironic statement are
absent from its written representation.25 Though Rousseau declined
to solve the problem himself, it was clear that the irony candle burned
brightly for Francophone writers.

Born a scant few years after Marcellin Jobard’s death, the poet
Marcel Bernhardt was next to throw his chapeau into the ring. Better
known by his anagrammatic pseudonym Alcanter de Brahm, Bern¬
hardt’s 1899 book L’ostensoir des ironies [The monstrosity of irony} was
a meandering philosophical tract in which he put forward a new mark
of punctuation resembling a stylized, reversed question mark (S).26
Alcanter’spoint d’ironie dripped with knowing humor: in a nod to the
sentiment often conveyed by verbal irony, he described it as “taking
the form of a whip,” and, aware that irony loses its sting when it must
be signposted in exactly the manner he was proposing, the French
name for his new symbol was a pun with the additional meaning of
“no irony.”27

Wayne C. Booth, Professor Emeritus of English at the University
of Chicago until his death in 2005, addressed Brahm’s irony mark in