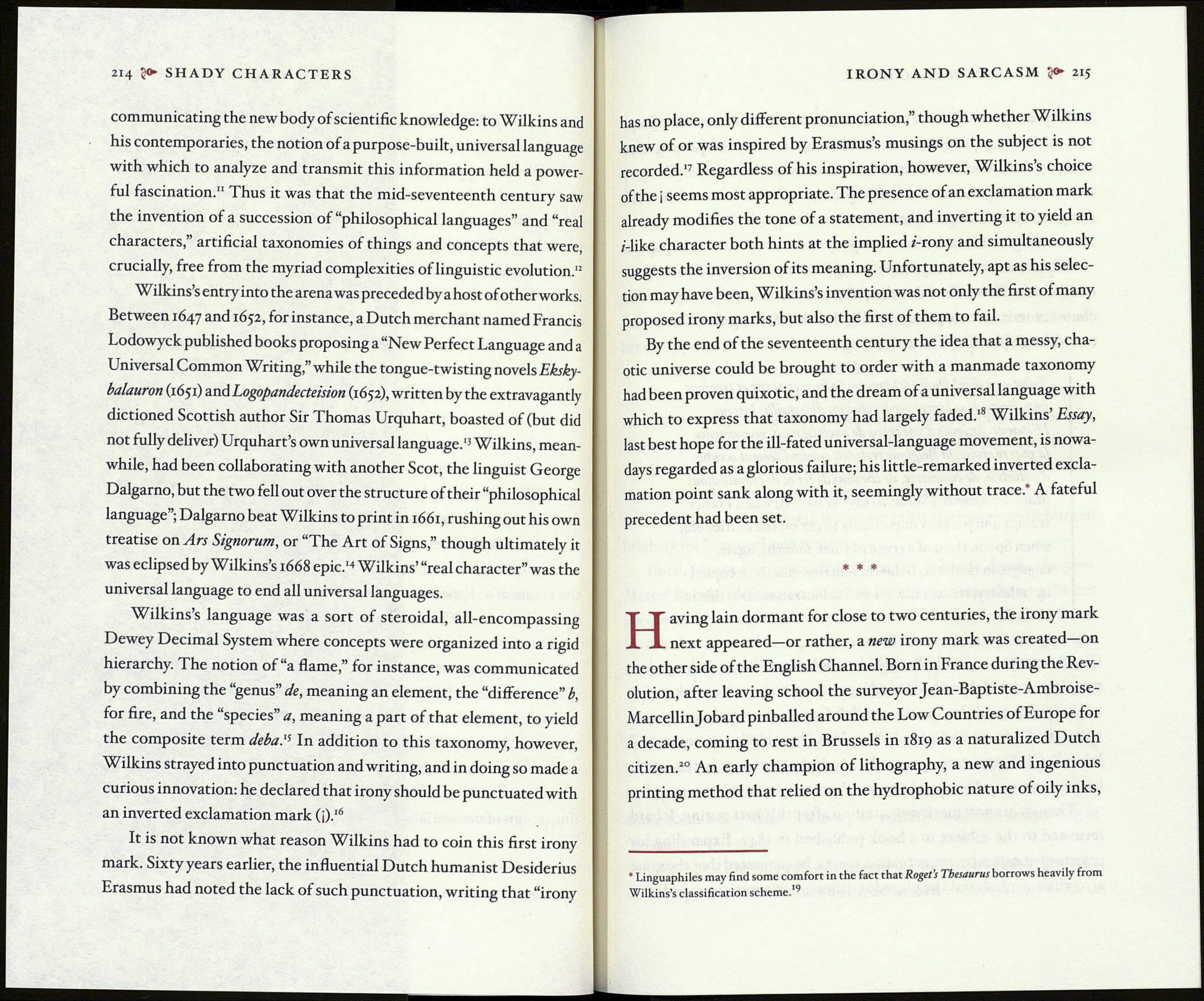 communicating the new body of scientific knowledge: to Wilkins and
his contemporaries, the notion of a purpose-built, universal language
with which to analyze and transmit this information held a power¬
ful fascination.11 Thus it was that the mid-seventeenth century saw
the invention of a succession of “philosophical languages” and “real
characters,” artificial taxonomies of things and concepts that were,
crucially, free from the myriad complexities of linguistic evolution.12

Wilkins’s entry into the arena was preceded by a host of other works.
Between 1647 anLodowyck published books proposing a “New Perfect Language and a
Universal Common Writing,” while the tongue-twisting novels Eksky-
balauron (1651) and Logopandecteision (1652), written by the extravagantly
dictioned Scottish author Sir Thomas Urquhart, boasted of (but did
not fully deliver) Urquhart’s own universal language.13 Wilkins, mean¬
while, had been collaborating with another Scot, the linguist George
Dalgarno, but the two fell out over the structure of their “philosophical
language”; Dalgarno beat Wilkins to print in 1661, rushing out his own
treatise on Ars Signorum, or “The Art of Signs,” though ultimately it
was eclipsed by Wilkins’s 1668 epic.1-* Wilkins’Teal character” was the
universal language to end all universal languages.

Wilkins’s language was a sort of steroidal, all-encompassing
Dewey Decimal System where concepts were organized into a rigid
hierarchy. The notion of “a flame,” for instance, was communicated
by combining the “genus” de, meaning an element, the “difference” b,
for fire, and the “species” a, meaning a part of that element, to yield
the composite term debaA In addition to this taxonomy, however,
Wilkins strayed into punctuation and writing, and in doing so made a
curious innovation: he declared that irony should be punctuated with
an inverted exclamation mark (¡).16

It is not known what reason Wilkins had to coin this first irony
mark. Sixty years earlier, the influential Dutch humanist Desiderius
Erasmus had noted the lack of such punctuation, writing that “irony

has no place, only different pronunciation,” though whether Wilkins
knew of or was inspired by Erasmus’s musings on the subject is not
recorded.17 Regardless of his inspiration, however, Wilkins’s choice
of the ¡ seems most appropriate. The presence of an exclamation mark
already modifies the tone of a statement, and inverting it to yield an
/-like character both hints at the implied /-rony and simultaneously
suggests the inversion of its meaning. Unfortunately, apt as his selec¬
tion may have been, Wilkins’s invention was not only the first of many
proposed irony marks, but also the first of them to fail.

By the end of the seventeenth century the idea that a messy, cha¬
otic universe could be brought to order with a manmade taxonomy
had been proven quixotic, and the dream of a universal language with
which to express that taxonomy had largely faded.18 Wilkins’ Essay,
last best hope for the ill-fated universal-language movement, is nowa¬
days regarded as a glorious failure; his little-remarked inverted excla¬
mation point sank along with it, seemingly without trace.* A fateful
precedent had been set.

Having lain dormant for close to two centuries, the irony mark
next appeared—or rather, a new irony mark was created—on
the other side of the English Channel. Born in France during the Rev¬
olution, after leaving school the surveyor Jean-Baptiste-Ambroise-
Marcellin Jobard pinballed around the Low Countries of Europe for
a decade, coming to rest in Brussels in 1819 as a naturalized Dutch
citizen.20 An early champion of lithography, a new and ingenious
printing method that relied on the hydrophobic nature of oily inks,

* Linguaphiles may find some comfort in the fact that Roget's Thesaurus borrows heavily from
Wilkins’s classification scheme.19