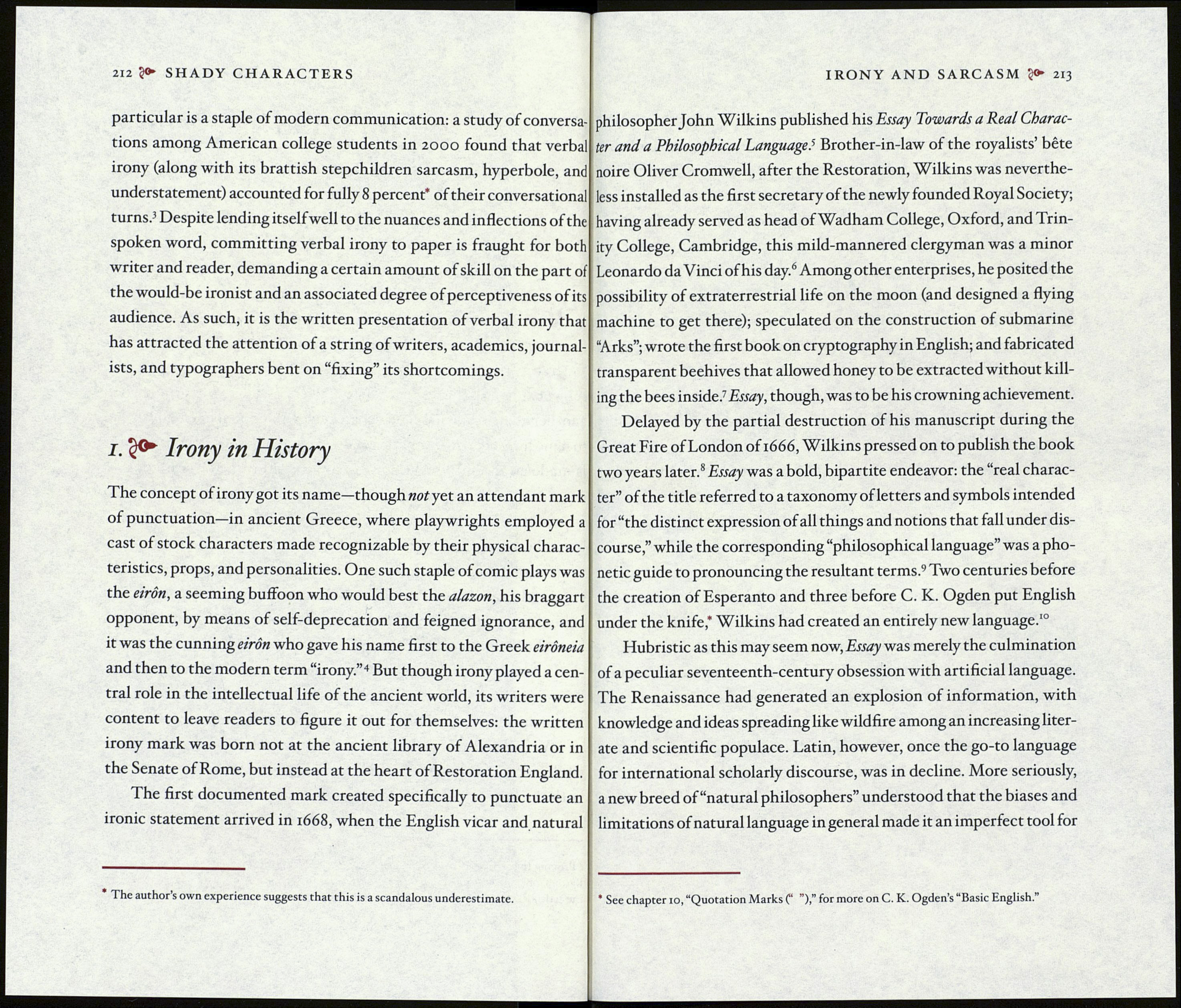 particular is a staple of modern communication: a study of conversa¬
tions among American college students in 2000 found that verbal
irony (along with its brattish stepchildren sarcasm, hyperbole, and
understatement) accounted for fully 8 percent* of their conversational
turns.3 Despite lending itselfwell to the nuances and inflections of the
spoken word, committing verbal irony to paper is fraught for both
writer and reader, demanding a certain amount of skill on the part of
the would-be ironist and an associated degree of perceptiveness of its
audience. As such, it is the written presentation of verbal irony that
has attracted the attention of a string of writers, academics, journal¬
ists, and typographers bent on “fixing” its shortcomings.

I. Irony in History

The concept of irony got its name—though wot yet an attendant mark
of punctuation—in ancient Greece, where playwrights employed a
cast of stock characters made recognizable by their physical charac¬
teristics, props, and personalities. One such staple of comic plays was
the eirôn, a seeming buffoon who would best the alazon, his braggart
opponent, by means of self-deprecation and feigned ignorance, and
it was the cunning eirôn who gave his name first to the Greek eirôneia
and then to the modern term “irony.”4 But though irony played a cen¬
tral role in the intellectual life of the ancient world, its writers were
content to leave readers to figure it out for themselves: the written
irony mark was born not at the ancient library of Alexandria or in
the Senate of Rome, but instead at the heart of Restoration England.

The first documented mark created specifically to punctuate an
ironic statement arrived in 1668, when the English vicar and natural

philosopher John Wilkins published his Essay Towards a Real Charac¬
ter and a Philosophical Language,5 Brother-in-law of the royalists’ bête
noire Oliver Cromwell, after the Restoration, Wilkins was neverthe¬
less installed as the first secretary of the newly founded Royal Society;
having already served as head of Wadham College, Oxford, and Trin¬
ity College, Cambridge, this mild-mannered clergyman was a minor
Leonardo da Vinci of his day.6 Among other enterprises, he posited the
possibility of extraterrestrial life on the moon (and designed a flying
machine to get there); speculated on the construction of submarine
“Arks”; wrote the first book on cryptography in English; and fabricated
transparent beehives that allowed honey to be extracted without kill¬
ing the bees inside.7 Essay, though, was to be his crowning achievement.

Delayed by the partial destruction of his manuscript during the
Great Fire of London of 1666, Wilkins pressed on to publish the book
two years later.8 Essay was a bold, bipartite endeavor: the “real charac¬
ter” of the title referred to a taxonomy of letters and symbols intended
for “the distinct expression of all things and notions that fall under dis¬
course,” while the corresponding “philosophical language” was a pho¬
netic guide to pronouncing the resultant terms.9 Two centuries before
the creation of Esperanto and three before C. K. Ogden put English
under the knife,* Wilkins had created an entirely new language.10

Hubristic as this may seem now, Essay was merely the culmination
of a peculiar seventeenth-century obsession with artificial language.
The Renaissance had generated an explosion of information, with
knowledge and ideas spreading like wildfire among an increasing liter¬
ate and scientific populace. Latin, however, once the go-to language
for international scholarly discourse, was in decline. More seriously,
a new breed of “natural philosophers” understood that the biases and
limitations of natural language in general made it an imperfect tool for

* The author’s own experience suggests that this is a scandalous underestimate.