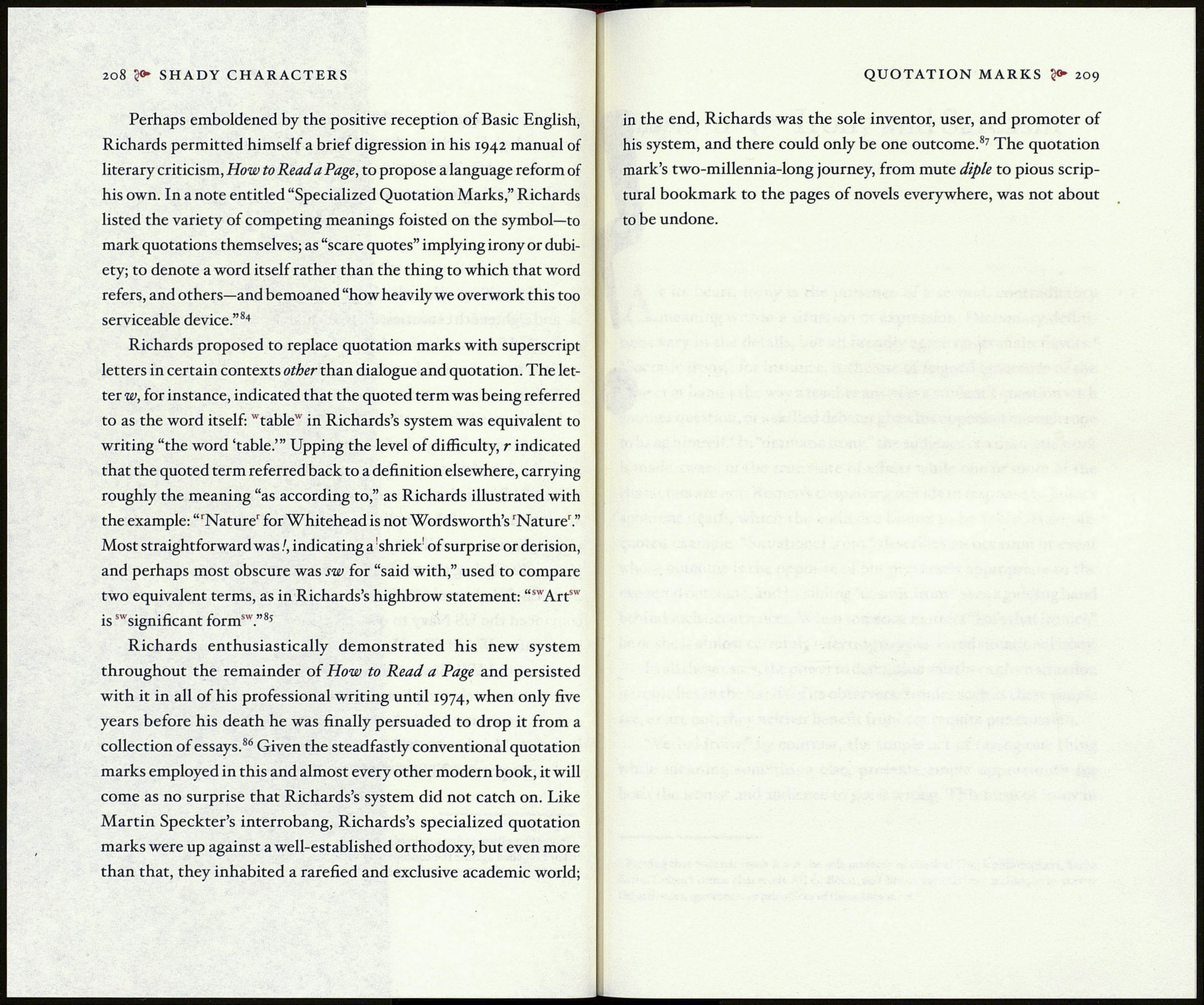 Perhaps emboldened by the positive reception of Basic English,
Richards permitted himself a brief digression in his 1942 manual of
literary criticism, How to Read a Page, to propose a language reform of
his own. In a note entitled “Specialized Quotation Marks,” Richards
listed the variety of competing meanings foisted on the symbol—to
mark quotations themselves; as “scare quotes” implying irony or dubi¬
ety; to denote a word itself rather than the thing to which that word
refers, and others—and bemoaned “how heavily we overwork this too
serviceable device.”84

Richards proposed to replace quotation marks with superscript
letters in certain contexts other than dialogue and quotation. The let¬
ter w, for instance, indicated that the quoted term was being referred
to as the word itself: " table" in Richards’s system was equivalent to
writing “the word ‘table.’” Upping the level of difficulty, r indicated
that the quoted term referred back to a definition elsewhere, carrying
roughly the meaning “as according to,” as Richards illustrated with
the example: “‘Nature’ for Whitehead is not Wordsworth’s ‘Nature’.”
Most straightforward was /, indicating a shriek1 of surprise or derision,
and perhaps most obscure was sw for “said with,” used to compare
two equivalent terms, as in Richards’s highbrow statement: “swArtsw
is Swsignificant formsw.”8ï

Richards enthusiastically demonstrated his new system
throughout the remainder of How to Read a Page and persisted
with it in all of his professional writing until 1974, when only five
years before his death he was finally persuaded to drop it from a
collection of essays.86 Given the steadfastly conventional quotation
marks employed in this and almost every other modern book, it will
come as no surprise that Richards’s system did not catch on. Like
Martin Speckter’s interrobang, Richards’s specialized quotation
marks were up against a well-established orthodoxy, but even more
than that, they inhabited a rarefied and exclusive academic world;

in the end, Richards was the sole inventor, user, and promoter of
his system, and there could only be one outcome.87 The quotation
mark’s two-millennia-long journey, from mute diple to pious scrip¬
tural bookmark to the pages of novels everywhere, was not about
to be undone.