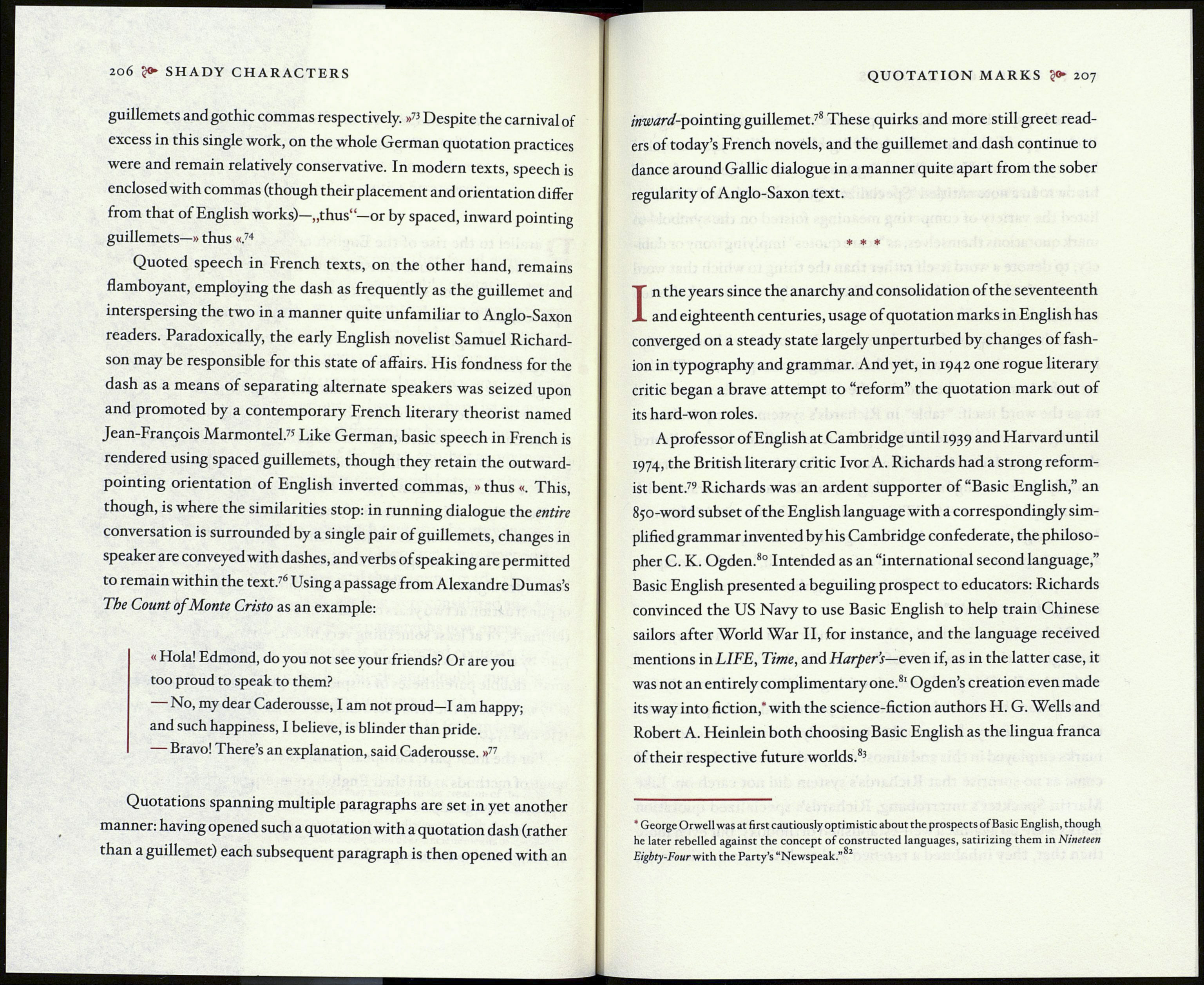 inward-pointing guillemet.7* These quirks and more still greet read¬
ers of today’s French novels, and the guillemet and dash continue to
dance around Gallic dialogue in a manner quite apart from the sober
regularity of Anglo-Saxon text.

In the years since the anarchy and consolidation of the seventeenth
and eighteenth centuries, usage of quotation marks in English has

guillemets and gothic commas respectively. »73 Despite the carnival of
excess in this single work, on the whole German quotation practices
were and remain relatively conservative. In modern texts, speech is
enclosed with commas (though their placement and orientation differ
from that of English works)—„thus“—or by spaced, inward pointing
guillemets—» thus «.74

Quoted speech in French texts, on the other hand, remains
flamboyant, employing the dash as frequently as the guillemet and
interspersing the two in a manner quite unfamiliar to Anglo-Saxon
readers. Paradoxically, the early English novelist Samuel Richard¬
son may be responsible for this state of affairs. His fondness for the
dash as a means of separating alternate speakers was seized upon
and promoted by a contemporary French literary theorist named
Jean-François Marmontel.'5 Like German, basic speech in French is
rendered using spaced guillemets, though they retain the outward-
pointing orientation of English inverted commas, » thus «. This,
though, is where the similarities stop: in running dialogue the entire
conversation is surrounded by a single pair of guillemets, changes in
speaker are conveyed with dashes, and verbs of speaking are permitted
to remain within the text.76 Using a passage from Alexandre Dumas’s
The Count of Monte Cristo as an example:

« Hola! Edmond, do you not see your friends? Or are you
too proud to speak to them?

—No, my dear Caderousse, I am not proud—I am happy;
and such happiness, I believe, is blinder than pride.

Quotations spanning multiple paragraphs are set in yet another
manner: having opened such a quotation with a quotation dash (rather
than a guillemet) each subsequent paragraph is then opened with an

converged on a steady state largely unperturbed by changes of fash¬
ion in typography and grammar. And yet, in 1942 one rogue literary
critic began a brave attempt to “reform” the quotation mark out of
its hard-won roles.

A professor of English at Cambridge until 1939 and Harvard until
1974, the British literary critic Ivor A. Richards had a strong reform¬
ist bent.79 Richards was an ardent supporter of “Basic English,” an
850-word subset of the English language with a correspondingly sim¬
plified grammar invented by his Cambridge confederate, the philoso¬
pher C. K. Ogden.80 Intended as an “international second language,”
Basic English presented a beguiling prospect to educators: Richards
convinced the US Navy to use Basic English to help train Chinese
sailors after World War II, for instance, and the language received
mentions in LIFE, Time, and Harper’s—even if, as in the latter case, it
was not an entirely complimentary one.81 Ogden’s creation even made
its way into fiction,* with the science-fiction authors H. G. Wells and
Robert A. Heinlein both choosing Basic English as the lingua franca
of their respective future worlds.*3

* George Orwell was at first cautiously optimistic about the prospects of Basic English, though
he later rebelled against the concept of constructed languages, satirizing them in Nineteen
Eighty-Four with the Party’s “Newspeak ”82