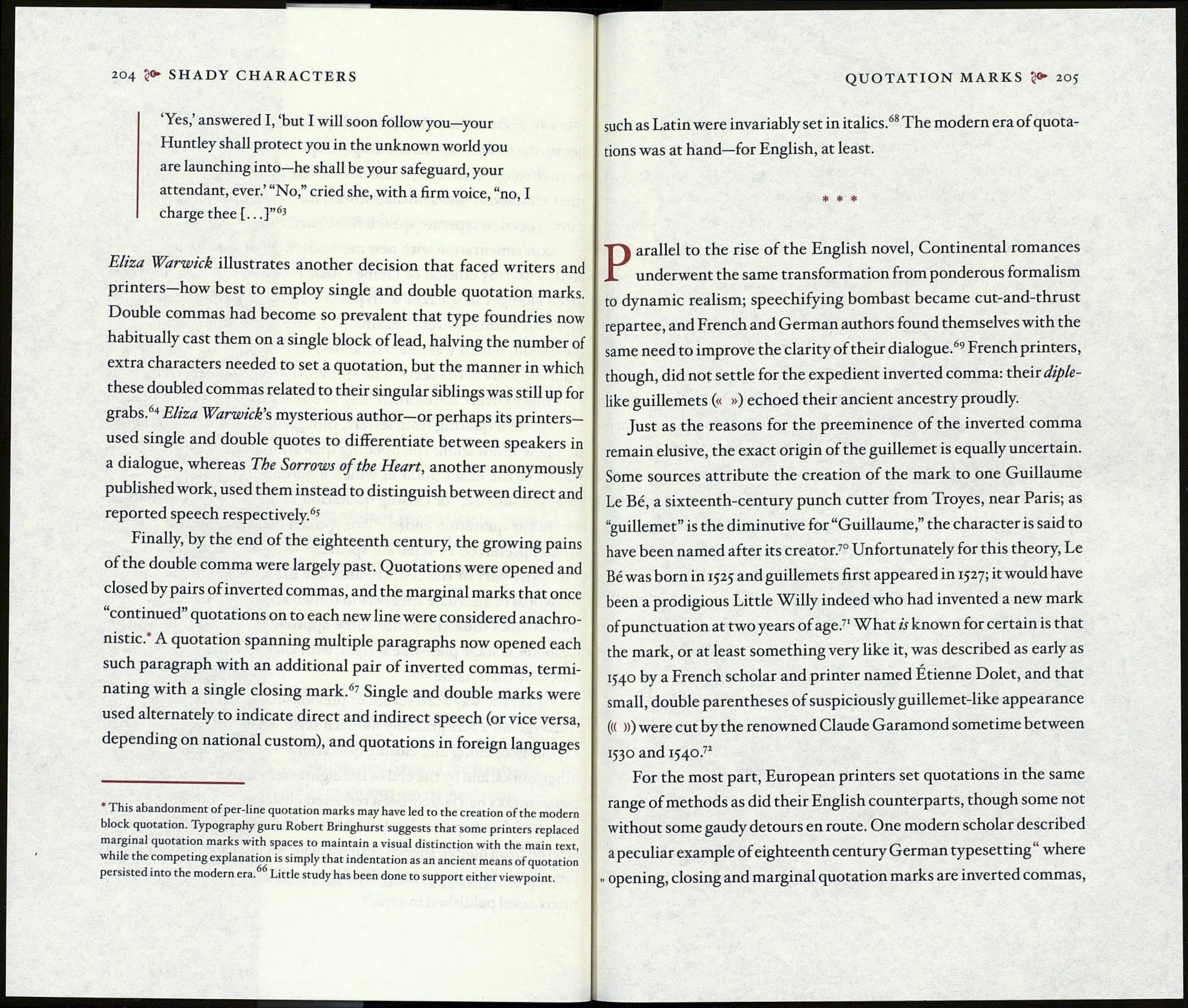 Yes,’ answered I, ‘but I will soon follow you—your
Huntley shall protect you in the unknown world you
are launching into—he shall be your safeguard, your
attendant, ever.’ “No,” cried she, with a firm voice, “no, I
charge thee [...}”63

Eliza Warwick illustrates another decision that faced writers and
printers—how best to employ single and double quotation marks.
Double commas had become so prevalent that type foundries now
habitually cast them on a single block of lead, halving the number of
extra characters needed to set a quotation, but the manner in which
these doubled commas related to their singular siblings was still up for
grabs.64 Eliza Warwick’s mysterious author—or perhaps its printers—
used single and double quotes to differentiate between speakers in
a dialogue, whereas The Sorrows of the Heart, another anonymously
published work, used them instead to distinguish between direct and
reported speech respectively.65

Finally, by the end of the eighteenth century, the growing pains
of the double comma were largely past. Quotations were opened and
closed by pairs of inverted commas, and the marginal marks that once
“continued” quotations on to each new line were considered anachro¬
nistic. A quotation spanning multiple paragraphs now opened each
such paragraph with an additional pair of inverted commas, termi¬
nating with a single closing mark.67 Single and double marks were
used alternately to indicate direct and indirect speech (or vice versa,
depending on national custom), and quotations in foreign languages

* This abandonment of per-line quotation marks may have led to the creation of the modern
block quotation. Typography guru Robert Bringhurst suggests that some printers replaced
marginal quotation marks with spaces to maintain a visual distinction with the main text,
while the competing explanation is simply that indentation as an ancient means of quotation
persisted into the modern era. Little study has been done to support either viewpoint.

such as Latin were invariably set in italics.68 The modern era of quota¬
tions was at hand—for English, at least.

Parallel to the rise of the English novel, Continental romances
underwent the same transformation from ponderous formalism
to dynamic realism; speechifying bombast became cut-and-thrust
repartee, and French and German authors found themselves with the
same need to improve the clarity of their dialogue.69 French printers,
though, did not settle for the expedient inverted comma: their diple-
like guillemets (« ») echoed their ancient ancestry proudly.

Just as the reasons for the preeminence of the inverted comma
remain elusive, the exact origin of the guillemet is equally uncertain.
Some sources attribute the creation of the mark to one Guillaume
Le Bé, a sixteenth-century punch cutter from Troyes, near Paris; as
“guillemet” is the diminutive for “Guillaume,” the character is said to
have been named after its creator.70 Unfortunately for this theory, Le
Bé was born in 1525 and guillemets first appeared in 1527; it would have
been a prodigious Little Willy indeed who had invented a new mark
of punctuation at two years of age.7’ What is known for certain is that
the mark, or at least something very like it, was described as early as
1540 by a French scholar and printer named Étienne Dolet, and that
small, double parentheses of suspiciously guillemet-like appearance
((( ))) were cut by the renowned Claude Garamond sometime between
1530 and 1540.72

For the most part, European printers set quotations in the same
range of methods as did their English counterparts, though some not
without some gaudy detours en route. One modern scholar described
a peculiar example of eighteenth century German typesetting where
. opening, closing and marginal quotation marks are inverted commas,