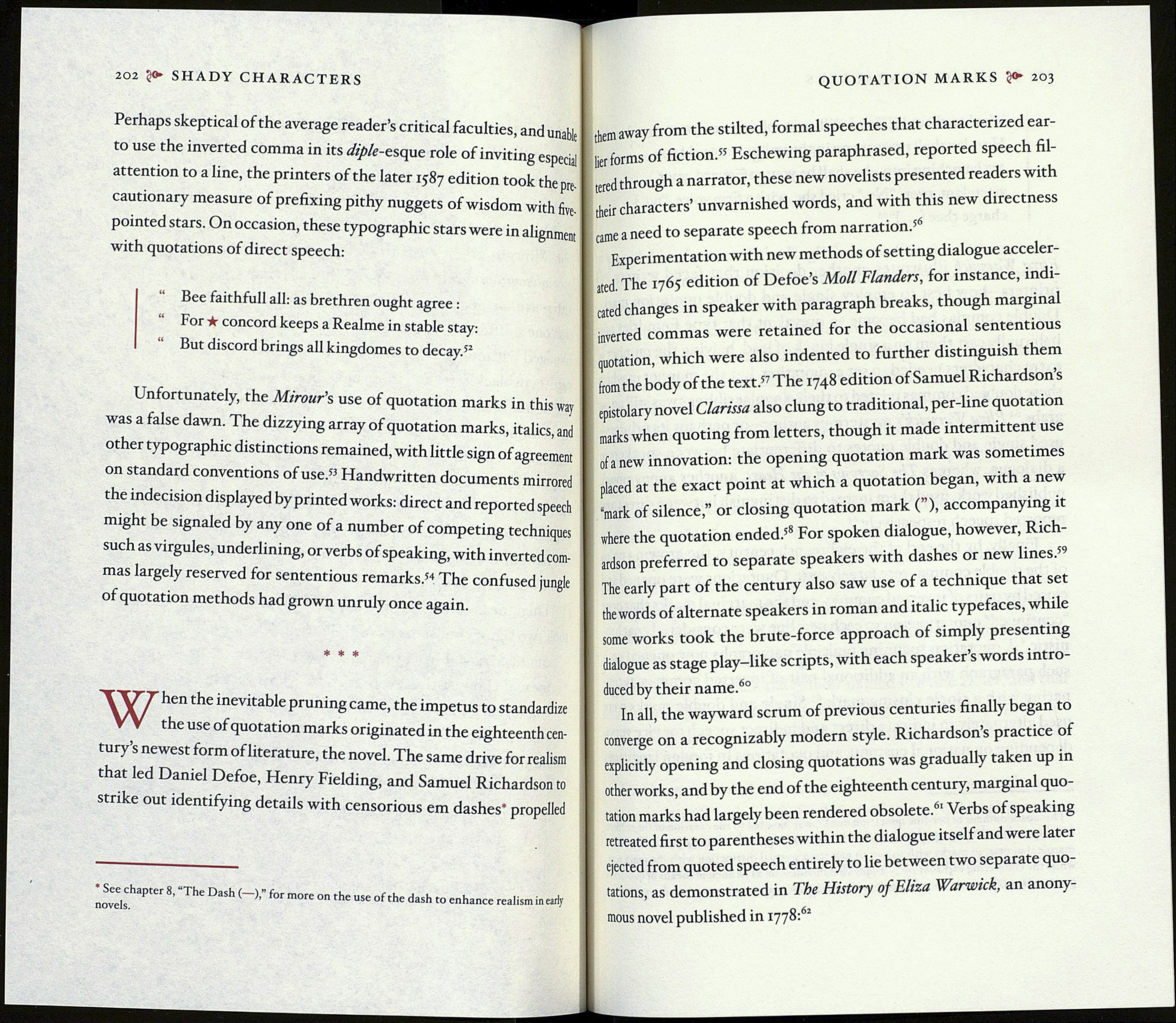 Perhaps skeptical of the average reader’s critical faculties, and unable
to use the inverted comma in its diple-zsque role of inviting especié
attention to a line, the printers of the later 1587 edition took thepre.
cautionary measure of prefixing pithy nuggets of wisdom with five.
pointed stars. On occasion, these typographic stars were in alignment
with quotations of direct speech:

Bee faithfull all: as brethren ought agree :

For ★ concord keeps a Realme in stable stay:

But discord brings all kingdomes to decay.52

Unfortunately, the Miner's use of quotation marks in this way
was a false dawn. The dizzying array of quotation marks, italics, and
other typographic distinctions remained, with little sign of agreement
on standard conventions of use.» Handwritten documents mirrored
the indecision displayed by printed works: direct and reported speech
might be signaled by any one of a number of competing techniques
such as virgules, underlining, or verbs of speaking, with inverted com¬
mas largely reserved for sententious remarks.« The confused jungle
of quotation methods had grown unruly once again.

TY7 hen the inevitable pruning came, the impetus to standardize
VV the use of quotation marks originated in the eighteenth cen¬
tury’s newest form ofliterature, the novel. The same drive forrealism
that led Daniel Defoe, Henry Fielding, and Samuel Richardson to
strike out identifying details with censorious em dashes* propelled

them away from the stilted, formal speeches that characterized ear¬
lier forms of fiction.55 Eschewing paraphrased, reported speech fil¬
tered through a narrator, these new novelists presented readers with
their characters’ unvarnished words, and with this new directness
came a need to separate speech from narration.56

Experimentation with new methods of setting dialogue acceler¬
ated. The 1765 edition of Defoe’s Moll Flanders, for instance, indi¬
cated changes in speaker with paragraph breaks, though marginal
¡„verted commas were retained for the occasional sententious
quotation, which were also indented to further distinguish them
from the body of the text.55 The 1748 edition of Samuel Richardson’s
epistolary novel Clarissa also clung to traditional, per-line quotation
marks when quoting from letters, though it made intermittent use
of a new innovation: the opening quotation mark was sometimes
placed at the exact point at which a quotation began, with a new
“mark of silence,” or closing quotation mark (”), accompanying it
where the quotation ended.58 For spoken dialogue, however, Rich¬
ardson preferred to separate speakers with dashes or new lines.59
The early part of the century also saw use of a technique that set
thewords of alternate speakers in roman and italic typefaces, while
some works took the brute-force approach of simply presenting
dialogue as stage play-like scripts, with each speaker’s words intro¬
duced by their name.60

In all, the wayward scrum of previous centuries finally began to
converge on a recognizably modern style. Richardson’s practice of
explicitly opening and closing quotations was gradually taken up in
other works, and by the end of the eighteenth century, marginal quo¬
tation marks had largely been rendered obsolete. Verbs of speaking
retreated first to parentheses within the dialogue itself and were later
ejected from quoted speech entirely to lie between two separate quo¬
tations, as demonstrated in The History of Eliza Warwick, an anony¬
mous novel published in 1778:62