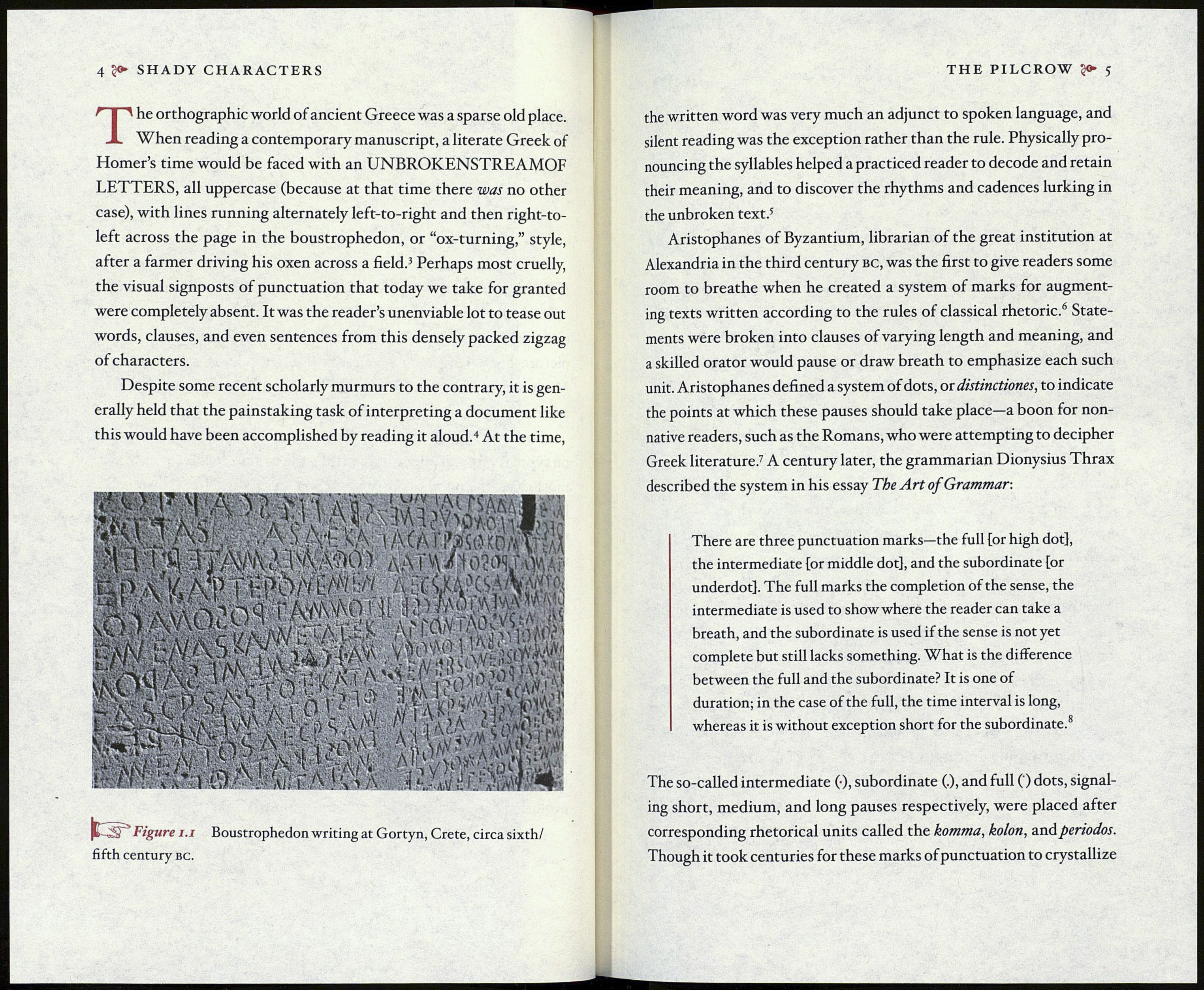 The orthographic world of ancient Greece was a sparse old place.
When reading a contemporary manuscript, a literate Greek of
Homer’s time would be faced with an UNBROKENSTREAMOF
LETTERS, all uppercase (because at that time there was no other
case), with lines running alternately left-to-right and then right-to-
left across the page in the boustrophedon, or “ox-turning,” style,
after a farmer driving his oxen across a field.3 Perhaps most cruelly,
the visual signposts of punctuation that today we take for granted
were completely absent. It was the reader’s unenviable lot to tease out
words, clauses, and even sentences from this densely packed zigzag
of characters.

Despite some recent scholarly murmurs to the contrary, it is gen¬
erally held that the painstaking task of interpreting a document like
this would have been accomplished by reading it aloud.4 At the time,

the written word was very much an adjunct to spoken language, and
silent reading was the exception rather than the rule. Physically pro¬
nouncing the syllables helped a practiced reader to decode and retain
their meaning, and to discover the rhythms and cadences lurking in
the unbroken text.5

Aristophanes of Byzantium, librarian of the great institution at
Alexandria in the third century вс, was the first to give readers some
room to breathe when he created a system of marks for augment¬
ing texts written according to the rules of classical rhetoric.6 State¬
ments were broken into clauses of varying length and meaning, and
a skilled orator would pause or draw breath to emphasize each such
unit. Aristophanes defined a system of dots, oxdistinctiones, to indicate
the points at which these pauses should take place—a boon for non¬
native readers, such as the Romans, who were attempting to decipher
Greek literature.7 A century later, the grammarian Dionysius Thrax
described the system in his essay The Art of Grammar-.

The so-called intermediate (•), subordinate (.), and full (') dots, signal¬
ing short, medium, and long pauses respectively, were placed after
corresponding rhetorical units called the komma, kolon, and periodos.
Though it took centuries for these marks of punctuation to crystallize