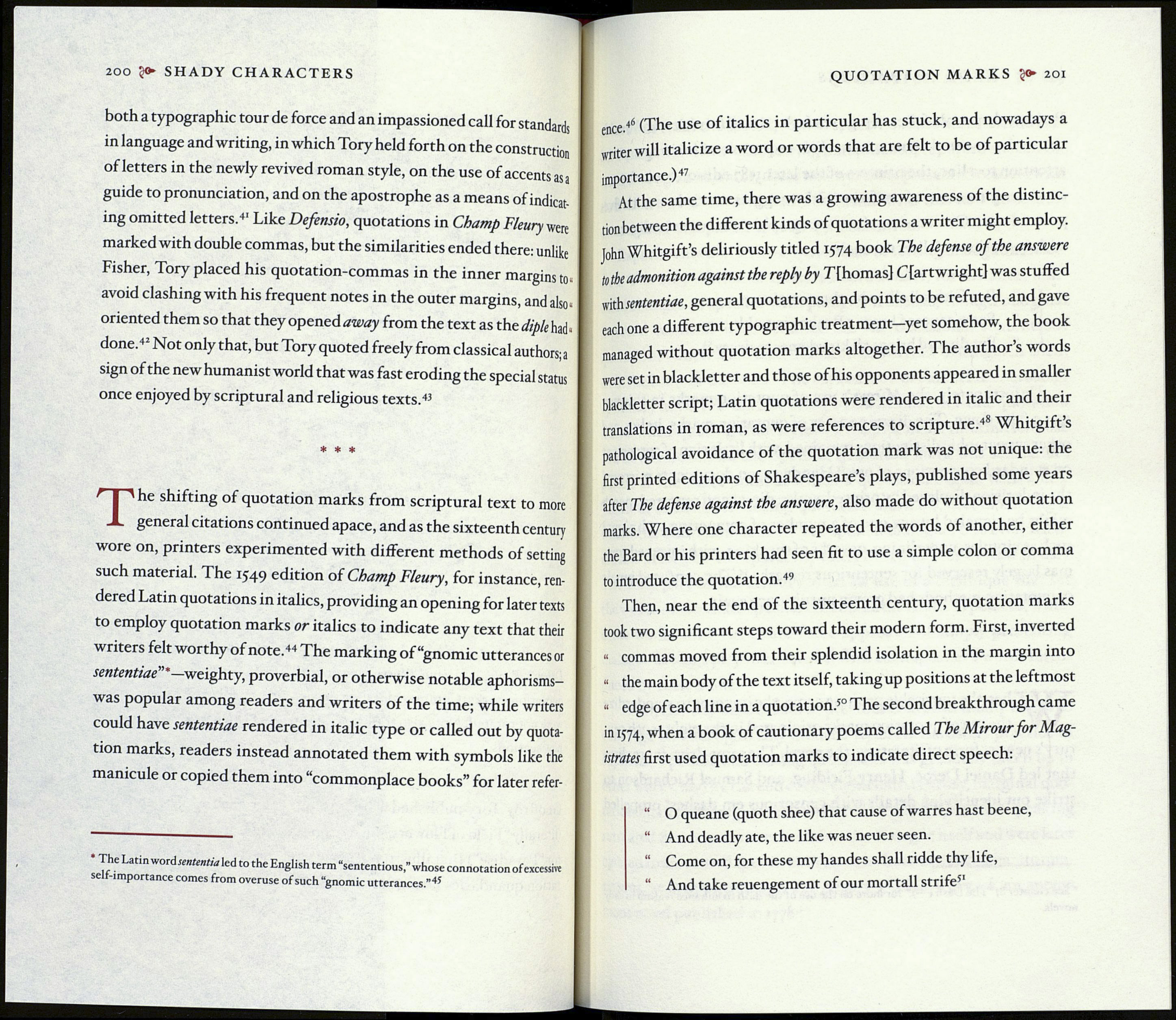 both a typographic tour de force and an impassioned call for standards
in language and writing, in which Tory held forth on the construction
of letters in the newly revived roman style, on the use of accents asa
guide to pronunciation, and on the apostrophe as a means of indicat¬
ing omitted letters.41 Like Defensio, quotations in Champ Fleury were
marked with double commas, but the similarities ended there: unlike
Fisher, Tory placed his quotation-commas in the inner margins to«
avoid clashing with his frequent notes in the outer margins, and also -
oriented them so that they opened away from the text as the diple had«
done.42 Not only that, but Tory quoted freely from classical authors;a
sign of the new humanist world that was fast eroding the special status
once enjoyed by scriptural and religious texts.43

r I ' shifting of quotation marks from scriptural text to more
-L. general citations continued apace, and as the sixteenth century
wore on, printers experimented with different methods of setting
such material. The 1549 edition of Champ Fleury, for instance, ren¬
dered Latin quotations in italics, providing an opening for later texts
to employ quotation marks or italics to indicate any text that their
writers felt worthy of note.44 The marking of “gnomic utterances or
sentential"—weighty, proverbial, or otherwise notable aphorisms-
was popular among readers and writers of the time; while writers
could have sententiae rendered in italic type or called out by quota¬
tion marks, readers instead annotated them with symbols like the
manicule or copied them into “commonplace books” for later refer-

* The Latin word sententi*, led to the English term “sententious,” whose connotation of excessive
selt-importance comes from overuse of such “gnomic utterances.”45

enee.46 (The use of italics in particular has stuck, and nowadays a
writer will italicize a word or words that are felt to be of particular
importance.)47

At the same time, there was a growing awareness of the distinc¬
tion between the different kinds of quotations a writer might employ.
John Whitgift’s deliriously titled 1574 book The defense of the answere
tothe admonition against the reply by T[homas] Cfartwright] was stuffed
with sententiae, general quotations, and points to be refuted, and gave
each one a different typographic treatment—yet somehow, the book
managed without quotation marks altogether. The author’s words
were set in blackletter and those of his opponents appeared in smaller
blackletter script; Latin quotations were rendered in italic and their
translations in roman, as were references to scripture.48 Whitgift’s
pathological avoidance of the quotation mark was not unique: the
first printed editions of Shakespeare’s plays, published some years
after The defense against the answere, also made do without quotation
marks. Where one character repeated the words of another, either
the Bard or his printers had seen fit to use a simple colon or comma
to introduce the quotation.49

Then, near the end of the sixteenth century, quotation marks
took two significant steps toward their modern form. First, inverted
“ commas moved from their splendid isolation in the margin into
11 the main body of the text itself, taking up positions at the leftmost
“ edge of each line in a quotation.50 The second breakthrough came
in 1574, when a book of cautionary poems called The Mirourfor Mag¬
istrates first used quotation marks to indicate direct speech:

“ О queane (quoth shee) that cause of warres hast beene,

“ Come on, for these my handes shall ridde thy life,

“ And take reuengement of our mortali strife5'